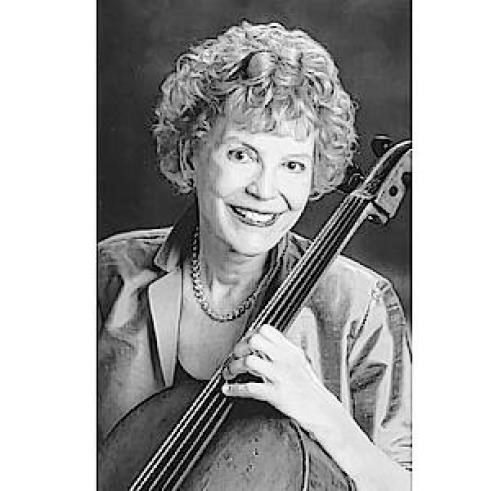 BORN
1925
DIED
2017
FUNERAL HOME
Weed-Corley-Fish Funeral Home North - Austin
3125 N Lamar Blvd.
Austin, TX
YOUNG, Phyllis One of the Butler School of Music's most distinguished emeritus faculty members has passed away. Phyllis Young, Professor Emerita of Cello and String Pedagogy, who was the first holder of UT's Parker C. Fielder Regents Professorship in Music, died on Wednesday, November 8, 2017, in Austin at the age of 92. She was born Phyllis Casselman on Oct. 20, 1925, to Velma Stewart and Philip James Casselman, in Milan, Kansas, and raised in Conway Springs, Kansas. Deciding to pursue a career in music, she earned B.M. and M.M. degrees in cello performance from UT Austin, where she studied under her beloved cello professor Horace Britt. She also studied at the Paris Conservatory and the Chigiano Academy in Siena, Italy. She was a UT Music faculty member from 1953 until her retirement in 2007 and was one of the first women at UT to be promoted to full professor. In addition to her private cello studio, Mrs. Young established the Texas Cello Choir and directed the renowned UT String Project for 35 years, seeing it become a world-wide model for programs that train string teachers and young string players. Her former students hold positions in major universities, schools, and orchestras in the U.S. and abroad, including the New York Philharmonic. Professor Young was President of the American String Teachers Association 1978-80 and spent additional two-year terms as President-Elect and Past President. Her first book on string pedagogy, Playing the String Game: Strategies for Teaching Cello and Strings, published in 1978, went through multiple printings and was translated into more than half a dozen foreign languages. Her second book, The String Play: The Drama of Playing and Teaching Strings, appeared in 1986, and she authored numerous articles in professional journals. She gave hundreds of invited workshops and master classes in more than 33 countries around the world and in most states of the U.S. Mrs. Young received many honors and awards for her work, including the Distinguished Service Award of the American String Teachers Association in 1984. She was honored in 2000 by Indiana University's Eva Janzen Memorial Cello Center with the title "Grande Dame du Violoncelle," and in 2002 she received the Paul Rolland Lifetime Achievement Award from ASTA and the National School Orchestra Association. She is listed in Who's Who in America and similar publications and was the subject of a doctoral dissertation done at Boston University in 2010. Beginning in 1945, for 46 years Phyllis was married to James M. Young, a World War II Air Force veteran and one of the founders of Tracor, who died in 1991 after many years of disability from multiple sclerosis. She was predeceased by her parents and a brother. She leaves a sister-in-law, Madge Casselman, and a nephew, David M. Casselman, both in Arlington, Texas, and a niece, Marsha C. Dickson, in Newark, Delaware as her primary relatives. Arrangements by Weed-Corley-Fish Funeral Home are not yet complete. There will likely be a small memorial service at Westminster, where Phyllis had a beautiful apartment for the last several years, and a future celebration of her life and career held in UT's Butler School of Music. Her inspiring work and beloved personality have touched the lives of many and had a lasting impact on thousands of musicians and music lovers around the globe, leaving the world a more beautiful and harmonious place in her wake. For those desiring, you may also access the online guest registry and obituary at www.wcfish.com.

Published by Austin American-Statesman on Nov. 12, 2017.
To plant trees in memory, please visit the Sympathy Store.
MEMORIAL EVENTS
To offer your sympathy during this difficult time, you can now have memorial trees planted in a National Forest in memory of your loved one.
Funeral services provided by:
Weed-Corley-Fish Funeral Home North - Austin
MAKE A DONATION
MEMORIES & CONDOLENCES
Sponsored by Weed-Corley-Fish Funeral Home North - Austin.
13 Entries
The Australian Strings Association would like to express condolences to the friends and family of Phyllis Young. We deeply appreciated the knowledge and love of music she shared with us during her time in Australia. Her work lives on with many fond memories of the pedagogical legacy she has left with us.
Helen Tuckey
Acquaintance
November 25, 2017
Phyllis Young was as unmissable at masterclasses and recitals as her totem animal, a giraffe, would have been. I came to Austin in 1985 for work and started cello as an adult beginner in 2002. Truly a tall, sweet, and powerful personality and a fine Midwesterner, I discover, beneath that ebullient Texas personality.
Mary Blockley
November 21, 2017
Phyllis was not only passionate about music but also about animals. She was a supporter of Animal Trustees of Austin for many years and adopted Georgia from me many years ago.

May she Rest In Peace with all of her beloved pets who have passed on. I am quite sure they were there to greet her and thrilled to be together again
Missy McCullough
Friend
November 15, 2017
I knew her casually for over 50 years and I was always glad to see her. She would always brighten my day. So gracious and friendly!

Jim Bryan , founder of Alpha Music Center (1976-2011)
Jim Bryan
Acquaintance
November 15, 2017
Some thoughts about growing up under Phyllis Young's guidance, often as a second mother.
I entered the Strings Project in its second year as a cello student. I think I was 12 yrs. old and began studying with Phyllis Young a year later. As I remember my lessons, they were in a house annex and we children were always together but had separate lessons. Our class included Judy Cline, Deirdre Malkemus, Evangeline Marko, Alice Middleman and me (Mary Eleanor Brace). We were kids and she, about 15 years older, was Mrs. Young' to us. In the lessons we learned the standard pieces; short pieces in a progression of difficulty until we got to the Golterman Concerti. Mrs. Young' would tease us by playing some of the Golterman Concerto No. 4, last movement, at some point before assigning it as the next piece to be studied and we just could not wait to begin playing it. Her enthusiasm was very contagious and three of that first class became professional musicians.
I remember Jimmy waiting in the car to take her home after lessons were finished. And, there was that chocolate bar at about 5 o'clock that she enjoyed as our lessons went overtime.
We loved hearing Phyllis Young's recital performances and the Schubert Quintet with Horace Britt.
It was a wonderful time to grow up in the 50's and her influence will be remembered always.
Mary Eleanor Brace Pitcairn
November 14, 2017
The years I studied cello in the University String Project have continued to have a profound influence on my life, my career, my hobbies, and my friends. I will be forever grateful to Mrs. Young for her vision and energy in creating such an environment where we learned about music and life. God bless and keep you, Phyllis.
Dale Farley
Student
November 14, 2017
I remember her energy, professionality, and love for music and life.
I was great to know you Phillis!
un grande abbraccio,
Barbara Bertoldi
da Trento in Italia
Barbara Bertoldi
November 14, 2017
Your were an inspiration to many. My time studying with you was important in my musical development. You were important in the development of string programs everywhere. You will be missed.
Dwayne Wasson
Friend
November 12, 2017
Phyllis was a tremendous force in the American String Teacher Association, the first female president of the organization and a terrific mentor to those of us who followed her. But she was also a wonderful and influential leader in the world of string teaching and as a cellist. I was grateful to be a roommate of hers at one of Jerry Fischbach's workshops and to see many aspects of her more personal side. So many of us will miss her.
Anne Heiles
November 12, 2017
I don't think I have room to say all I appreciate about Phyllis. She was a very patient teacher while I was at UT with my less than perfect practicing skills; she was instrumental in my learning how to manage all kinds of responsibilites due to her support of what my job responsibilities were with the Jr String Project as well as being a student of. She was so very supportive and caring to a young married who was trying to learn the ropes of it all.....even at the end, when I pulled out my cello after setting it aside for 38 years after graduation, I told her I was going to take a few lessons to help "get back on track".... Her response, "Well, don't you dare take from anyone but me". I only wish I had gotten the change.
I loved this dear lady and everything that was written in her obituary is true and well deserved.
Rest in peace Phyllis. You were definataly one of a kind and at the top of many of our lists. You will be missed.
Sandy Hayes
November 12, 2017
I am so sorry to hear of Ms. Young's death. I was a UT String Project student during the years she was there. It was a very important experience in my life. I have very good memories of that period of my life. I can certainly say that it enriched my life in many ways. May she rest in peace! Condolences to her family and friends.
Margaret J. Gomez
Student
November 12, 2017
Phylliss, we will all miss you. You were always very kind and caring to me. I have told many people that I thought of you as the "Carol Channing of the School of Music at UT." Thank you for who you were. Bob Gowdey
Bob Gowdey
Sister
November 12, 2017
I will miss Phyllis' joie de vivre, her boundless energy, her inspiring and encouraging voice, her loving kindness, her compassionate care and concern for others including her beloved husband and pets. Her beloved nature and skill as a teacher inspired so many around the world as a consummate professional, always dedicated to bringing out the best in each of us. Phyllis was my friend for over 67 years and I will treasure our shared memories in my heart forever.
Deirdre Malkemus Norton Spann
Deirdre Spann
November 12, 2017
Showing 1 - 13 of 13 results