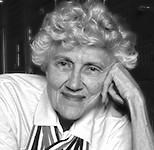 Ruth Taubert Seeger's contributions to sports, her students, and the role model she has established for thousands of Deaf children, are immeasurable. She strived to be like the famous woman athlete, 'Babe' Didrickson.

Born to Olga and William Taubert in Evan, Minnesota in 1924, it was discovered that Ruth was Deaf. Raised in Sleepy Eye, Minnesota, Ruth and her brother, Sheldon, also Deaf, attended the Rochester Institute for the Oral (close to the Mayo Clinic) and later attended high school at the Minnesota State Academy for the Deaf. Ruth was a superb athlete, excelling in numerous sporting events.

Upon graduation Ruth looked for a higher educational opportunity that would allow her to accomplish her desire to become a successful coach and help others accomplish their athletic goals. Ruth attended Gallaudet University where she participated in various sporting events as a member of the Women's Athletic Association. Upon graduation from Gallaudet University, Ruth's contributions to the world of Deaf athletes were only beginning. In 1957 she became the first Deaf American woman to compete for the United States in the track and field division of the World Games for the Deaf. She also competed in the mixed doubles tennis competition, earning a bronze medal for the U.S.

Ruth met Julius Seeger, a Texan, at Gallaudet University, and upon graduation in 1949, they married and located in Austin Texas, teaching at the Texas School for the Deaf (TSD) for a combined total of 75 years. In 1960, she gave birth to their only child - Mark Seeger.

In 2005 at the age of 81, Ruth earned her 300th gold medal at the Pittsburg National Senior Games and her 301st gold medal she dedicated to her husband Julius. In other National Senior Games competitions Ruth won first place in the 75-79 age group categories of Field Shotput, Field Discus, Javelin, Long Jump and High Jump competitions and today continues to hold the World Record for Javelin in the age category of 80-85.

The Austin American Statesman recognized Ruth as one of "Six Outstanding Women of Austin'" in 1972 and in 1988 she was inducted into the Texas Women's Hall of Fame by then Governor Clements. Upon retirement, then Governor Mark White officially commissioned her as a Yellow Rose of Texas and in recognition of her many contributions to the Girls Athletic program at the Texas School for the Deaf, the Athletic facility was named the 'Seeger Gym'. She was later appointed by Governor Ann Richards to serve as a Commissioner with the Texas Commission for the Deaf.

She leaves behind a loving son, Mark Seeger and his husband, Jeff Harper of Austin. Ruth also leaves behind a very special nephew Robert (Bob) Taubert, who she cared for as a son during his teenage years prior to his enlistment in the Navy. Bob has four sons - Dominic, Adrian, Kristopher, and Jonathan - and five grandsons and one granddaughter - who continue the Taubert family legacy. Ruth's husband, Julius, preceded her in death on December 15, 2011.

The family is most grateful to the following lifelong friends and caregivers who were with Ruth as part of our family when we learned she would be challenged with Alzheimer's Disease: Marie Poss, Kathryn Caldcleugh, Kathleen Rogers, Carrie Frazier, and Jo Bienvenu. We also would like to recognize all of the loving staff at Sodalis Memory Care in San Marcos, and Heart to Heart Hospice for your wonderful care.

The family will have a small private graveside service immediately following the memorial service.

To honor Ruth's legacy in the field of Athletics, the family has asked that in lieu of flowers, consideration be given to memorial tax deductible contributions for the Texas School for the Deaf Foundation.

Memorials and guestbook online at www.wcfish.com

To plant trees in memory, please visit our Sympathy Store.
Published by Austin American-Statesman from Apr. 20 to Apr. 26, 2014.
MEMORIAL EVENTS
Apr
27
Memorial service
2:00p.m.
St. Martin's Lutheran Church
606 W. 15th Street, Austin, TX
MAKE A DONATION
MEMORIES & CONDOLENCES
8 Entries
I always miss her and called her "my second mother" . My email address is [email protected]
And love her so much.
Dorothy L. Adamietz
April 24, 2014
So sorry to hear of the loss of Ruth. She was an exceptional woman. Mark, you will be in our prayers.
Teryl Cardella
April 22, 2014
I have never had the honor of meeting you, Ruth, but starting last month, I have been learning of your Texas-sized legend. You shall not be forgotten at all!
CB Buchholz
April 19, 2014
To my much-loved sister-in-law, Ruth. I love you and will miss you, but I know you're with Julius and you're happy. God bless!
Lawrence Seeger
April 17, 2014
I know, she is a strong coach plus power faith at god. My ex-tsd 1971 through 1977.
TRACY WOLD
April 17, 2014
Rosie and I have fond memories of Ruth and also will miss her presence. We also appreciate how much Mark and Jeff have taken loving care of both parents over the years.
April 16, 2014
She is very wonderful to teach all student sports at Texas School for the Deaf many years. she is good peace into home heaven.
Maria Walker
April 16, 2014
I will miss her twinkling eyes, her pretty smile, and her warm heart. She was a beautiful person and her spirit was inspiring.
Jennifer Berg Howell
April 16, 2014
Showing 1 - 8 of 8 results