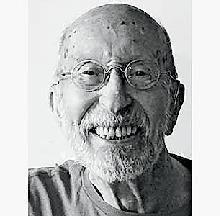 MONAS, Sidney Sidney Monas, scholar, critic, and retired professor at the University of Texas at Austin, died in Los Angeles on March 29, 2019, at the age of 94. This is not Sidney's first obituary. In May 1945 when he returned home from internment as a POW in Germany, the twenty-year old Sidney learned that his hometown paper had published an account of his death during the Battle of the Bulge. But Sid was one of the lucky few who were captured, shipped to Germany, and survived until being liberated by General Patton's army. He returned to Princeton University to resume the education that had been interrupted by the war he saw as "the fundamental uniting experience of my generation." Although by his own account Sid was never comfortable at Princeton in those Jewish-quota days, he revered his teachers and threw himself into his studies. A classmate introduced Sid to his future wife Carolyn Munro, daughter of a Princeton professor; the two were married in 1948, and they had three children between 1949 and 1954. Sidney went on to study at the Russian Research Center at Harvard and earned his Ph.D. in History from Harvard in 1955. Sidney's distinguished academic career included stints teaching at Amherst (1955-1957), Smith (1957-1962), and at the University of Rochester (1962-1969). In 1969, John Silber recruited him to UT, where he held a joint appointment in the History and Slavic Languages Departments until his retirement. He taught classes at the undergraduate and graduate level in Russian intellectual history, as well as offerings in historiography, comp lit, and even an English Department class in Shakespeare and Dostoevsky. Among his accomplishments, Sidney was a translator and essayist: His translations from the Russian include Dostoevsky's Crime and Punishment and works by Mandelstam, Zoshchenko, Punin, and Grigory Kaganov. Sidney's book The Third Section: Police and Society in Russia Under Nicholas I, was published by Harvard University Press in 1961. Sid contributed essays to many publications and was editor of the Slavic Review from 1985 to 1991. The academic life gave Sid great opportunities for travel, with sabbaticals in Rome (1959-1960), Jerusalem (1966-1967), St. Petersburg (1974), and Canberra (1977). He made many shorter trips to the Soviet Union from 1956 through the 1990s, to Israel again in 1992, and to Mexico, Ethiopia, China, and Iran among other destinations. In 1985 Sidney's wife Carol died, and in 1987 Sid married Claire Anderson, who brought him back into an active social and intellectual life, and into a loving family with her daughter Rose. Sid and Claire were frequent attendants at the meetings of the UT British Studies Seminar, hosted lively gatherings in their home in Westlake Hills, and traveled widely together. In 2012, Sidney moved in with his son Steve and daughter-in-law Maggie Megaw in Los Angeles. Sid regularly attended the LA Phil, loved dance events, and worked out with a personal trainer until recently. In his last months he enjoyed the company of his caregivers Shineen Requena and Mayola Pinelo, and Shineen's three-year old daughter Adelyn, with whom he loved watching animated movies. Sidney is predeceased by his daughter Erica and grandson Michael and is survived by his children Deborah and Stephen, his six grandchildren Noah, Grace, Ben, Hannah, Anna, and Rachel, and his five great-grandchildren Wiley, Eric, Elise, Antonella, and Peter. He treasured the gift of life and did not waste a minute of it.
Published by Austin American-Statesman on Apr. 5, 2019.
To plant trees in memory, please visit our Sympathy Store.
MEMORIAL EVENTS
To offer your sympathy during this difficult time, you can now have memorial trees planted in a National Forest in memory of your loved one.
MAKE A DONATION
MEMORIES & CONDOLENCES
5 Entries
A great Ph.D. Mentor to me at the University of Rochester.
Gilbert McArthur
July 31, 2019
Thoughts and prayers are extended to the grieving family and friends as your beloved Sidney R.I.P.
April 21, 2019
My sincere condolences to you all during this time of great loss.