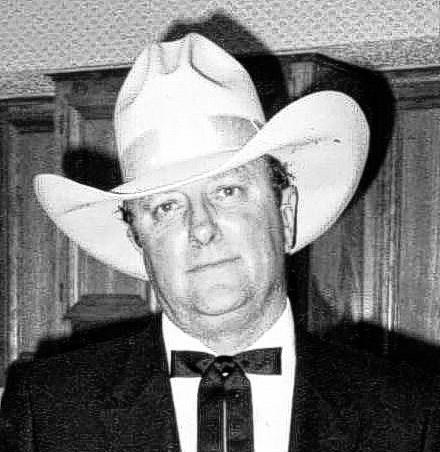 BORN
1937
DIED
2016
FUNERAL HOME
Marrs-Jones-Newby Funeral Home
505 Old Austin Highway
Bastrop, TX
WEDDLE,
William Leland "Bill"
With a character, personality, and heart as big as his beloved Texas, William Leland (Bill) Weddle entered the arms of his Lord and Savior April 19, 2016 at the age of 78.
He was preceded in death by his loving wife of 58 years Starrlene Glenda (Star) Weddle and brother Michael Weddle.
Bill is survived by his daughter Treva and her husband Thomas Wimbrow, granddaughter Melissa Amos and her husband Mickey Amos, great-granddaughter Cheyenne Amos, numerous extended family, and a multitude of friends.
Born in Monahans, Texas to Arthur Leland Weddle and Lucille Andrews Weddle, Bill was a graduate of Grandfalls High School and the University of Texas at El Paso. He lived throughout Texas and worked for many years in the trucking and oil industries before he and Star settled in Bastrop where he was elected and proudly served as Precinct 1 Justice of the Peace.
A Lifetime Member of the Houston Livestock Show and Rodeo, Bill had a lifelong love of animals, especially Doberman Pinchers Dobie, We-gi, Tsa-li (Charlie), and Olympia along with many other dog, cat, and horse fur babies. Bill and Star for many years enjoyed showing their "kids" at Dog Shows and exhibiting Star's art work at the Sante Fe Indian Market and other prestigious Native American Art Shows.
Bill was proud of his Confirmation as member of Ascension Catholic Church during Easter of 2015 and he and his family are grateful for the love, support, and prayers of his friends and the Ascension congregation.
Visitation will be from 5:00pm to 8:00pm and the Rosary will be at 7:00pm on Sunday, April 24, 2016 at Marrs-Jones-Newby Funeral Home. The funeral home is located at 505 Old Austin Highway in Bastrop, Texas.
The Funeral Service will be at 10:00am on Monday, April 25, 2016 at Ascension Catholic Church. Ascension Catholic Church is located at 802 Pine Street in Bastrop, Texas.
Following the services Family and Friends are invited to the Parish Hall for fellowship from 11:00pm to 2:00pm. William will be laid to rest 2:00pm on Tuesday, April 26, 2016 at Monahans Memorial Cemetery in Monahans, Texas.
Published by Austin American-Statesman from Apr. 24 to Apr. 25, 2016.
To plant trees in memory, please visit the Sympathy Store.
MEMORIAL EVENTS
Apr
24
Visitation
5:00p.m. - 8:00p.m.
Marrs-Jones-Newby Funeral Home
505 Old Austin Highway, Bastrop, TX
Apr
24
Rosary
7:00p.m.
Marrs-Jones-Newby Funeral Home
505 Old Austin Highway, Bastrop, TX
Apr
25
Memorial Gathering
11:00a.m. - 2:00p.m.
Ascension Catholic Church - Parish Hall
TX
Apr
25
Funeral service
10:00a.m.
Ascension Catholic Church
802 Pine Street, Bastrop, TX
Apr
26
Burial
2:00p.m.
Monahans Memorial Cemetery
Monahans, TX
Funeral services provided by:
Marrs-Jones-Newby Funeral Home
MAKE A DONATION
MEMORIES & CONDOLENCES
Sponsored by Marrs-Jones-Newby Funeral Home.
11 Entries
I'm so sorry for your loss. Please lean on God for comfort to get you through this difficult time.
April 30, 2016
Weddle's family reach out to God for the strength to endure(2Corinthians 4:7).
William Ringfield
April 29, 2016
At times like this we need a friend and there's no better friend to have then our father in the heavens who hears our Cry's of sorrow and pain. Psalms 55;22.Sorry for your loss.
April 29, 2016
Sorry for your loss. May the GOD of all comfort be with the family at this time of sorrow.
S. Washington
April 27, 2016
Dad, I love and miss you so very much. Today we will celebrate your life and tomorrow we will lay you to rest next to Mother. Rest in peace my Sweet Loving Dad. Forever, your Daughter.
Treva Wimbrow
April 25, 2016
TED GARNER
Ted garner
April 24, 2016
It was an absolute pleasure to get to know Bill during his RCIA formation at Ascension Catholic Church. My heart was full of joy when he was baptized last Easter. He came by my office every once in awhile and we had great conversations about his journey to Christ. I will miss his sweet humble heart. He doesn't know this but as a fair and just judge he saved my family. You could tell he served with fairness and compassion-he was a righteous man. I know this dear sweet man is in heaven right now enjoying the peace and comfort of Our Lord. I pray the family will find comfort during this time of loss and remember the wonderful memories.
Tessy Dorantes
April 23, 2016
What moves through us is a silence, a quiet sadness, a longing for one more day, one more word, one more touch, We may not understand why you left this earth so soon, or why you left before we were ready to say good-bye, but little by little, we will begin to remember not just that you died, but that you lived. And that your life gave us memories too beautiful to forget. It will be the little things that you will remember ,the quiet moments, the smiles, the laughter the breakfast meeting at Maxine's and Starbucks, Your conversation and love for all and although it may seem hard right now It will be these memories of these little things that help to push away the pain and bring the smiles back again. Rest in peace we will miss you >>>

Your friend Paul & Karen Grabowski
Paul Grabowski
April 23, 2016
Bill is right now making our Lord laugh as Bill walks with Him. Just last Saturday he got me and the entire nursing staff in stitches. I brought him a fish dinner and one nurse told him NO because of his blood sugar testing. . Bill then said "Nurse Sugar, "Fish is sugarless and one other thing-A little sugar and a smile go a long way , nurse". She laughed and said "you win, Bill".

Bill we will be pressing the beads and praying for you and family!

Mac and Janet McCracken
April 22, 2016
I had the great pleasure of knowing Bill Weddle for a number of years while living in beautiful Bastrop. Bill will be surely missed by not only myself but by everyone which had contact with him. My condolences to the family, and his friends in Bastrop. May god bless you Bill.
GARY MASSEY
April 22, 2016
My condolences to the family and friends of our former Justice of the Peace Bill Weddle. I had the honor of knowing him through his work with Bastrop County, the Bastrop Democratic Party and later at Ascension Catholic Church. He will be missed by many in the community. May he rest in peace as he joins his beloved wife.
Council Member Dock Jackson
April 21, 2016
Showing 1 - 11 of 11 results