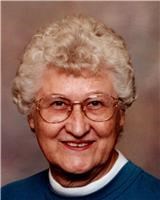 BORN
1935
DIED
2021
FUNERAL HOME
Danekas Funeral Chapel & Crematory - Colville
155 W First Avenue
Colville, WA
Alta Arline Byington, age 86, a 57-year resident of Colville, Washington, passed away on Sept. 8, 2021, in Colville.
Alta was born on Aug. 31, 1935, in Homedale, Idaho, the daughter of Arthur and Rosa (Dines) Thompson.
She spent most of her childhood on the move with her family as her father traveled for work opportunities.
Their family resided in many communities throughout Washington, Idaho and Oregon.
Alta left school early when her mother fell ill and completed her GED many years later.
She was working locally in Homedale when she crossed paths with a former schoolmate named Donel Byington. They began dating and, on Feb. 15, 1955, they exchanged vows.
Alta and Don then moved to Elko, Nevada, where they resided on a rural ranch and she assisted wherever possible.  Moving to Idaho next, she turned her focus to the needs of the home as they welcomed their first daughter, Dawn, and their son, Steven.
Don was an iron worker and for several years moved his family wherever he found work. Their second daughter, Laurie was born in Ellensburg, Washington, prior to their relocation to Tucson, Nevada.
In 1964, they purchased a ranch in the China Creek area near Colville. Alta worked the farm, raised huge gardens and cared for the home and her children. Don would return on the weekends to assist.
In 1974, they purchased a farm on Mingo Mountain, which they operated until the mid 1980s.
Alta also worked outside the home as an administrative assistant at the Statesman Examiner and Pinewood Terrace Nursing home for many years, during which she returned to school and attended college courses to better improve her skills.
Don and Alta made a final move to Marcus, Washington, where they enjoyed their time together until his passing on Dec. 13, 2000.  Alta remained there following Don's passing until her health required she move to assisted living at Buena Vista Nursing Home.
Alta was a very dignified and kind person who took great pride in making sure her family's needs were met even when times were very slim. She planted, weeded, harvested and canned all summer long to carry her family throughout the year.
Her heart compelled her to help and her home was a safe place with a warm meal to many. This included family members whom she lovingly embraced, such as Mike and Michelle.
She was honest as the day is long and saw right and wrong through a very black and white lens. Alta would speak the truth when she felt it was needed, whether asked or not. Her command presence was one that granted her lifelong respect and response anywhere she was present.
Alta was an avid reader, daring and talented snowmobiler, and spent many hours 4-wheeling.
She gave her time as a council member on Marcus City Council and was active in the planning and preparation for Marcus Cider Fest.
Alta was also a member of the Marcus Ladies Club for many years.
She never asked for anything from anyone that she couldn't do herself.
She was preceded in death by her husband, Donel F. Byington; brothers, Arthur Thompson, Glen Thompson, Martin Thompson, Doug Thompson; sisters, Linda Petersen and Genevieve Bontrager.
Alta is survived by her children, Dawn Day of Colville; Steven Byington (Lori) of Austin, Texas; Laurie Byington of Spokane, Washington; sisters, Sharon Cox (Ed), Lynette Quinn and Mary Covey all of Colville; brothers, Richard Thompson (Vivian)  Victorville, California, Fred Peterson (Gloria) of Colville; grandchildren, Steven Byington Jr. (Kelsey), Tiffany Farias (Hector), Danelle Manzanares (Bret) and Torie Brothers; great-grandchildren, Kaidance and Maddox; numerous nieces, nephews and extended family
A graveside service and vault interment took place Tuesday, Sept. 14, 2021, at the Mountain View Park Cemetery in Colville.   Pastor Shane Moffitt officiated.
Memorial contributions may be given to the Buena Vista Library Fund in memory of Alta.
Please visit the online memorial and sign the guestbook at www.danekasfuneralchapel.com.  Danekas Funeral Chapel and Crematory is entrusted with arrangements.
Published by The Statesman Examiner from Sep. 14 to Sep. 15, 2021.
To plant trees in memory, please visit the Sympathy Store.
MEMORIAL EVENTS
To offer your sympathy during this difficult time, you can now have memorial trees planted in a National Forest in memory of your loved one.
Funeral services provided by:
Danekas Funeral Chapel & Crematory - Colville
MAKE A DONATION
MEMORIES & CONDOLENCES
Sponsored by Danekas Funeral Chapel & Crematory - Colville.
0 Entries
Be the first to post a memory or condolences.