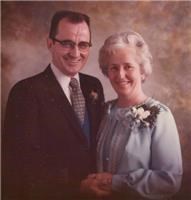 BORN
1926
DIED
2021
FUNERAL HOME
Danekas Funeral Chapel & Crematory - Colville
155 W First Avenue
Colville, WA
In the early evening of Sunday, July 25, 2021, the soul of Brownie Jean Mortlock left her body on the little blue recliner at her home in Kettle Falls, Washington, on the shore of Lake Roosevelt, to enter the presence of her Lord and Savior, Jesus Christ.
Born in Seattle, Washington, June 10, 1926, to Milton and Agnes Stapp, she grew up with two sisters, Louise Braun and Jeri Ruiz.
Brownie met her husband-to-be, Rev. Earl Mortlock, on March 3, 1945, at a USO dance in Seattle. They were engaged April 3 and married Aug. 3, 1946. Between November 1948 and January 1966, she birthed eight boys and two girls. Their names are: Leonard, Judith, David, Daniel, Gary, Richard, Peter, Rebecca, Timothy and Philip.
Her children married and Brownie had 26 grandchildren. The grandchildren married and Brownie gained 40 great-grandchildren.
If truth be told, Brownie would admit she never planned to marry a minister or have 10 children.
She became an outstanding Bible study teacher. Brownie loved her Bible (God's word) and read and studied it faithfully.
She enjoyed baseball and basketball vicariously through her husband, kids and grandkids.
She regularly watched the M's, Seahawk and Zag games.
House plants, especially cactus were scattered in her home.
She had many horses over the years and Arabians were her favorite.
At times in her life she drew house floor plans that were truly functional.
For years she did genealogical studies of our family. She was an avid reader and often recommended and purchased books for her kids.
Close relatives that preceded Brownie in death include: Earl Mortlock (husband); Milton Stapp (dad); Agnes Wertz (mom); Louise Braun (sister); Janis Mortlock (Thew) (daughter-in-law); Daniel Mortlock (son); John Ortner (son-in-law).
Brownie was buried in Reardan, Washington, alongside her husband and mother.
A private family gathering will be held in her honor. Leave messages or memories at www.danekasfuneralchapel.com.
In lieu of flowers please send a gift to: Union Gospel Mission, P.O. Box 4066, Spokane, WA 99220-0066 or to a non-profit of your choice in her memory.
Danekas Funeral Chapel and Crematory is entrusted with arrangements.
Published by The Statesman Examiner from Aug. 3 to Aug. 4, 2021.
To plant trees in memory, please visit the Sympathy Store.
MEMORIAL EVENTS
To offer your sympathy during this difficult time, you can now have memorial trees planted in a National Forest in memory of your loved one.
Funeral services provided by:
Danekas Funeral Chapel & Crematory - Colville
MAKE A DONATION
MEMORIES & CONDOLENCES
Sponsored by Danekas Funeral Chapel & Crematory - Colville.
0 Entries
Be the first to post a memory or condolences.