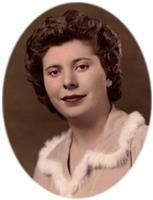 BORN
1926
DIED
2021
FUNERAL HOME
Danekas Funeral Chapel & Crematory - Colville
155 W First Avenue
Colville, WA
Levonne Fae Blackman, affectionately known to many as "Grandma B," age 94, a longtime resident of the Colville and Kettle Falls, Washington, communities, passed away on Sept. 25, 2021, in Colville, due to complications of COVID.
Levonne was born on Dec. 30, 1926, in Olivet, South Dakota, the daughter of Walter and Florence (Boegler) Gillette. She was raised in and around Olivet, where she attended school.
Levonne graduated in 1944 from Beresford High School.
She then attended college at South State Teachers at Springfield, South Dakota, and attained her Permit to Teach at a rural schoolhouse.
On May 18, 1947, she married Robert Blackman and they soon began a family.
Their young family traveled significantly within the states of Iowa and South Dakota where work was available.
Having moved over 18 times, they made a final move to the Kettle Falls area in 1964.
Levonne worked in the home raising her six children, Mike, Sherry, Dan, Patty, Gloria and Tim. As the children got older, she began to work outside the home.
Levonne was an assistant cook in the Kettle Falls schools and continued cooking for kids at the Orient School after the family moved to the ranch near Laurier, Washington. She also worked as the janitor at the school as well.
Robert's health began to decline and required they move to Colville. Levonne assisted Robert with his janitorial business until his passing in 1994.
She then took a slower approach to life and surrounded herself with her family. She babysat many of her grandchildren and loved to spoil them daily.
Levonne was a caregiver by nature and, even when she couldn't babysit, she turned her limited abilities to helping with social outreach programs for kids and adults in need.
Levonne was the matriarch of her family. She loved them with all of her heart, soul and every bit of her being. She cherished the fact they were all close and able to visit regularly.
Traveling down memory lane, the smell of home-baked bread and baked goods filled the senses of her children and grandchildren as they reflected on her daily offerings of baked goods.
Levonne's home was open to those in need, and was a regular pit stop for law enforcement as she always had a fresh pot of coffee on and cookie for the road.
Levonne was frugal and thrift-shopped at the Goodwill, Habitat for Humanity and was an avid yard saler!
When walking became difficult, her children would take her concierge yard sale shopping "drive by style."
Levonne was generous almost to a fault. She had incredible strength and fortitude that carried her family through many times of trial and tribulation.
Her greatest strength was love and the compassion she offered without reservation.
Faith, gratitude and pride in her family were what filled her heart each and every day.
Levonne is preceded in death by her husband, Robert Blackman; three sons, Dan, Mike and Tim Blackman; grandson, Casey Eslick, great grandson, Gregory Hall and son-in-law, Fred Petersen.
She is survived by her three daughters, Sherry Fox (Dale) of Colville, Patty Chester (Dan) of Colville, and Gloria Petersen; daughters-in-law, Claudia Blackman, Barb Blackman, and Jan Blackman; sister, Verlyn Voldseth of Brandon, South Dakota; brother, Curtis Gillette (Launa) of Placentia, California; 15 grandchildren, 23 great-grandchildren and six great-great-grandchildren, as well as a host of extended family.
The Memorial Service for Mrs. Levonne Fae Blackman will begin at 1p.m., Wednesday, Oct. 13, 2021, at the Assembly of God Church in Colville. Levonne will be laid to rest beside her husband, Robert, at the Mountain View Park Cemetery.
Memorial contributions may be given to either the American Childhood Cancer Organization of the Inland Northwest (ACCOIN) at P.O. Box 8031, Spokane, WA 99203 or the Union Gospel Mission.
Please visit the online memorial and sign the guestbook at www.danekasfuneralchapel.com.
Danekas Funeral Chapel and Crematory is entrusted with the arrangements.
Published by The Statesman Examiner from Oct. 5 to Oct. 6, 2021.
To plant trees in memory, please visit the Sympathy Store.
MEMORIAL EVENTS
Oct
13
Memorial service
1:00p.m.
Assembly of God Church
516 E Glen Ave, Colville, WA
Funeral services provided by:
Danekas Funeral Chapel & Crematory - Colville
MAKE A DONATION
MEMORIES & CONDOLENCES
Sponsored by Danekas Funeral Chapel & Crematory - Colville.
0 Entries
Be the first to post a memory or condolences.