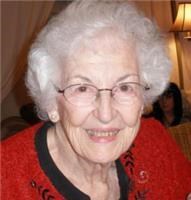 BORN
1924
DIED
2021
Jean's beautiful spirit and her great sense of humor flew across the sky on her way to Heaven on Aug. 22, 2021.
Jean was born March 25, 1924, in Stamford, Connecticut, to Ralph Hooker Mix and Ina Thresher Mix.
Jean was the third of four children born to her parents. She was preceded in death by her father and mother; her sister, Francis Bradford Mix Wheatley Stoddard; and her two brothers, Ralph Thresher Mix and John Sheldon Mix; and her nephew, Richard Mix.
Jean attended Stamford High School and graduated in 1942. She then attended the University of Connecticut from 1942-1943.
With WWII raging in Europe and the Pacific, Jean joined the fight as a Navy Wave.
She followed in the footsteps of her brothers, who were serving in the Army and Navy.
Military service ran deep in Jean's family as her grandfather, Elisha Mix, was a General in the Union Army during the Civil War.
Jean met her husband, Minard "Mike" Thompson, a wounded Marine, while she was serving at the Great Lakes Naval Hospital in Illinois.
They were married in December 1945 in Jesup, Iowa. Jean and Mike welcomed their daughter, Janice D., into the world in 1947, and their son, Minard Jr., in 1950.
The family made their home in Jesup, Iowa, where Jean worked in the U.S .Post Office.
Jean loved to do everything. She loved horses and she shared that passion with her family. She was instrumental in forming a horseback riding club in Jesup.
Jean was an avid swimmer, having grown up near the Connecticut shores of the Long Island Sound. She enjoyed water skiing, synchronized swimming, scuba diving and she was a certified swimming ind, structor. Jean swam over a mile and a half, three days a week, until she was 91 years old.
In 1974, Jean and Mike divorced but remained friends for many years.
Jean attended Hawkeye Technical College and became a Medical Records Transcriptionist and worked for St. Francis Hospital in Waterloo, Iowa until her retirement in 1986.
She bought two apartment buildings and, for years, operated the rental units.
In 2011, Jean moved from Waterloo to Lewiston, Idaho, where she shared a home with her daughter-in-law's mother, Phyllis Mahurin.
In late 2015, health problems for both Jean and Phyllis compelled their move to assisted living in Colville, Washington.
Jean suffered a stroke on Aug. 8 and passed into Heaven on Aug. 22 in Missoula, Montana.
She leaves behind her daughter, Jan (Edward) Kester of Marion, Iowa; her son, Minard (Janice) Thompson, Jr. of Colville; four grandchildren, Wade (Maureen) Feller of Colorado Springs, Colorado, Deanne Feller of Cedar Rapids, Iowa, Shannon (Shelly) Thompson of Simpsonville, South Carolina, Darcy (Brad) Matheny of Marion; three nieces, Judy (Ted) Copeland of Sarasota, Florida, Claire (Jim) Fawcett of Fountain Hills, Arizona, and Nancy (Jay) Sprout of St. Johnsbury, Vermont; nephew, Brad (Jean) Stoddard of Hot Springs, Ssuth Dakota; two great-grandchildren and one great-great grandchild.
Jean also leaves behind her loving, long-time best friend, Vicki (Dave) Plum of Dallas, Texas.
Jean will be laid to rest in the Cedar Crest Cemetery in Jesup, Iowa, near her beloved sister Francis.
Jean's sense of humor, wit and love of life will be missed by all that had the opportunity to know her.
"We are not human beings having a spiritual experience. We are spiritual beings having a human experience."
- Pierre Teihard de Chardin
Published by The Statesman Examiner from Oct. 19 to Oct. 20, 2021.
To plant trees in memory, please visit the Sympathy Store.
MEMORIAL EVENTS
To offer your sympathy during this difficult time, you can now have memorial trees planted in a National Forest in memory of your loved one.
MAKE A DONATION
MEMORIES & CONDOLENCES
0 Entries
Be the first to post a memory or condolences.