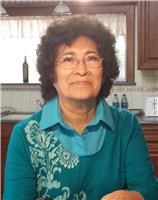 BORN
1945
DIED
2021
FUNERAL HOME
Danekas Funeral Chapel & Crematory - Colville
155 W First Avenue
Colville, WA
Mary Lucy Gonzalez, a resident of Colville, Washington, passed away on Aug. 12, 2021, in Colville at the age of 76.
Mary was born on July 23, 1945, in Hanford, California, the daughter of Frank Santos and Lucy (Miranda) Gonzalez.
Mary was raised in Corcoran, California, and left school in the sixth grade to begin working in support of her family.
She began in the cotton fields but due to her small size, her mother began teaching her how to sew and alter clothing garments.
She was incredibly talented and soon was working for clothing mercantile and department stores.
She moved to Washington and quickly became well known for her seamstress abilities.
She was called upon by clothing mercantiles and department stores throughout the Yakima Valley.
Mary opened her own seamstress store named "The Dress Makers" in Grandview, Washington, which she operated for over 40 years.
In her later years, Mary met Jerry Davidson and their friendship grew to love.
Their engagement was prolonged and marriage delayed due to the introduction and precautionary measures of COVID-19.
They continued to share in the making of memories and the combining of their lives together.
Mary's health began a rapid decline in July of this year and despite surgical intervention, her decline continued without remission.
Mary was mostly selftaught in her trade and her incredible creativity, patience, attention to detail, and unwaivering work ethic offered results that were seamless and sought after.
When she had a moment to share, Mary enjoyed many shopping outings with her sister Helen. Most of what they purchased was for each other, which brought great joy in regular gift-giving moments.
Mary loved to dance and listen to music.
She always had an attentive ear to those in need and had a joy for life that made her a happy person.
Mary was survived by her fiancé, Jerry Davidson of Colville; her three siblings, Helen Gonzalez of Grandview; and brothers, John Gonzales (Della) of Victorville, California, and Frank Gonzalez (Margarita) of Hesperia, California; and a host of extended family and friends.
The Funeral Mass for Mary L. Gonzalez will begin at 11 a.m, on Wednesday, Aug. 25, 2021, at the Immaculate Conception Catholic Church in Colville.
Memorial contributions may be given to the charity of your choice.
Please visit the online memorial and sign the guestbook at www.danekasfuneralchapel.com.
Danekas Funeral Chapel and Crematory is entrusted with the arrangements.
Published by The Statesman Examiner from Aug. 17 to Aug. 18, 2021.
To plant trees in memory, please visit the Sympathy Store.
MEMORIAL EVENTS
Aug
25
Funeral Mass
11:00a.m.
Immaculate Conception Catholic Church
Colville, WA
Funeral services provided by:
Danekas Funeral Chapel & Crematory - Colville
MAKE A DONATION
Please consider a donation as requested by the family.
MEMORIES & CONDOLENCES
Sponsored by Danekas Funeral Chapel & Crematory - Colville.
0 Entries
Be the first to post a memory or condolences.