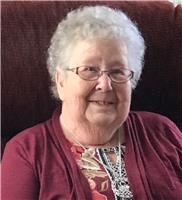 BORN
1929
DIED
2021
FUNERAL HOME
Danekas Funeral Chapel & Crematory - Colville
155 W First Avenue
Colville, WA
"I was born in Northport, Washington. Mother and Dad came from the ranch above Northport by team and sleigh. There was lots of snow and it was 4 degrees below zero.
Mother was cold and got off and walked part of the way to keep warm while she was in labor. We made it the 4 miles in time tho." (Excerpts of passages written by Nadine
in a family memory book).
Nadine was born on that cold February day to parents Thomas J. and Elizabeth E. (Wilson) Murphy. She joined an older brother, Jack. Several years later a sister, Gale, completed their family.
Nadine began her education at Fairview School which soon became Sheep Creek School, then graduated from Northport High School.
"The first time I ever saw your grandfather was at Sheep Creek grade school. He was the little dark haired boy that started to our school and sat behind me. We were in the 2nd grade in 1936."
Nadine married (the little dark-haired boy) Jack L. Midkiff on June 4, 1947, just days after her high school graduation. They started their life together in Northport where Jack operated the ferry across the Columbia River.
In the next few years they welcomed a daughter, Carol, then son, Tom, and completed their family a few years later with daughter, Barb.
"I worked summers at the New Zealand Hotel dining room as a waitress for 65 cents an hour while I was in high school."
Nadine worked at Beard's Grocery Store the first year of their marriage, then committed her full-time attention to their children, their schooling and activities, her community and neighborhood.
After the children were grown, she began working part-time at Palm's Mill, Kendrick's Mercantile and the Diamond Horseshoe in Northport; then as a Forestry Technician for the Colville National Forest.
She and Jack moved to Colville in their retirement years and enjoyed being closer to their children andgrandchildren.
Nadine will be fondly remembered for her love of family, her amazing family and holiday dinners, and her gracious hospitality to anyone who stopped by-always offering coffee and cookies.
She enjoyed writing poetry about her mother and father, her and Jack's 50th anniversary, her home friends. The poems show the depth of her family love, appreciation of nature and eternal optimism.
Nadine is survived by her sister, Gale; children, Carol Midkiff, Tom and Linda Midkiff, Barb and Don Hawpe; grandchildren, Laurie Crandall, Chad and Chrissy Buffan, Brian and Robin Midkiff, Jason and Jaclyn Midkiff, Kelly and Corey Cleveland, Justin and Kimberley Gorden; great grandchildren, Summer and Savannah Crandall, Kelsie and Cody Hotchkiss, Kassie Buffan and Cody Buffan, Lauren-Shey, Spencer and Morgan Midkiff, Jack and Wyatt Midkiff, Isabelle Cleveland, Madison and Nick Zappia, Rowdy and Blaze Gorden; and five great-great-grandchildren.
She was preceded in death by her husband, Jack; her parents, Tom and Lizzy; her brother, Jack; and a great-greatgranddaughter, Novalee.
A private family graveside will be held at the Mountain View Park Cemetery in Colville, where Nadine will be laid to rest with her husband, Jack.
The family would like to acknowledge the wonderful care and compassion provided by Hospice of Spokane, especially Nadine's personal attendants, Nurse Lynda, Bath Aid Kim and Social Services Assistant Cindy.
Memorial contributions in Nadine's memory may be made to Hospice of Spokane, PO Box 2215, Spokane, WA 99210-2215 or to a charity of your choice.
Please visit the on-line memorial and sign the guest book at www.danekasfuneralchapel.com.
Danekas Funeral Chapel & Crematory is in charge of arrangements.
Published by The Statesman Examiner from Jul. 13 to Jul. 14, 2021.
To plant trees in memory, please visit the Sympathy Store.
MEMORIAL EVENTS
To offer your sympathy during this difficult time, you can now have memorial trees planted in a National Forest in memory of your loved one.
Funeral services provided by:
Danekas Funeral Chapel & Crematory - Colville
MAKE A DONATION
Please consider a donation as requested by the family.
MEMORIES & CONDOLENCES
Sponsored by Danekas Funeral Chapel & Crematory - Colville.
0 Entries
Be the first to post a memory or condolences.