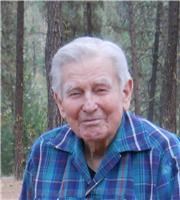 BORN
1925
DIED
2021
FUNERAL HOME
Danekas Funeral Chapel & Crematory - Colville
155 W First Avenue
Colville, WA
William Wyland Huffman, age 95, of Colville, Washington, passed away on July 4, 2021, in Colville with family at his side.
William was born on Oct. 4, 1925, in Hagerman, New Mexico, the son of William Asa and Eva (Wyland) Huffman.
His father was a pastor in the Church of the Nazarene, and William grew up with his life closely intertwined with church activities. He was known to his family and friends as "Wyland."
He was raised in New Mexico until the age of 10, when he moved with his family to Tucson, Arizona.
His father passed away later that year, and William entered a difficult time in his life growing up, attending school, and learning life without his dad.
He graduated from Tucson High School in 1943 and then sought the permission of his mother to enter the U.S. Navy during World War II at the age of 17.
William became a corpsman at age 18 on the front lines in the South Pacific, providing medical care for wounded in New Guinea and at the Battle of Leyte Gulf in the Philippines.
Having seen traumatic loss of life and limb of countless soldiers, he developed a deep desire to minister to servicemen's spiritual as well as physical needs.
As a result, William felt called to re-enter the U.S. Navy as a chaplain following WWII.
After returning from the war, he prepared for the chaplaincy by earning his bachelor's degree in 1950 at Pasadena College, California, and his Master of Divinity degree at Emory University School of Theology in 1952.
He was ordained and commissioned as an officer and chaplain in the Navy that same year.
His first assignment was to serve as chaplain for a fleet of six destroyers, including the U.S.S. Vogelsang, in the North Atlantic Ocean and Mediterranean Sea, deployed out of Norfolk, Virginia.
On Sept. 8, 1950, he married Elizabeth R. Williams in Culver City, California, and they soon began a family.
He subsequently served as chaplain on the U.S.S. Bryce Canyon, deployed out of Long Beach, California. He was stationed in San Diego, California, and Camp Pendleton, California, with the Marines, where he was the first chaplain to complete Marine cold-weather survival training.
In the years that followed, he was stationed on Guam, Fallon, Nevada, Sicily, Italy, and Newport, Rhode Island, where he attended Senior Chaplains' School at Naval War College.
In addition, along the way, he worked toward a doctorate at the University of Chicago in 1964.
During the Vietnam war, he served as chaplain on the aircraft carrier U.S.S. Kitty Hawk CVA-63, which he considered to be his most intense, yet rewarding tour of duty as he ministered to thousands of men undergoing the intense stress of war. He was greatly loved by them, and was affectionately nicknamed "The Happy Chappy."
William retired as a Captain (O-6) from the U.S. Navy on Mar. 31, 1974, and continued serving, teaching, and preaching as a guest and interim pastor in the communities he and Elizabeth resided in throughout the years.
He also served as a hospital administrator at the Churchill County Hospital. The Huffmans moved in 1977 to Nampa, Idaho, and he worked as a volunteer chaplain at the veterans' home in Boise, Idaho.
He and Elizabeth moved to Chattaroy, Washington, in 1996 to be closer to their family. He served as an interim pastor in Deer Park, Washington, before their final move to Colville in 2001 where they have resided since.
William was a kind, generous, and loving man, an affirming friend to all, who invested his life enthusiastically sharing God's love to the servicemen and families he served. He was ordained through the Church of Nazarene and ministered to all without bias.
As an attentive and loving husband, he and Elizabeth were married for 70 years.
He was an extraordinarily cheerful father, who was there to build tree houses and playhouses, and ride horses with his children.
No matter where they were as a family, he would often say it was "the best ever."
He took his family camping often, including tent camping throughout Europe.
He and Elizabeth loved to travel with their children, and made sure no stone was unturned nor place unexplored to the fullest.
He was a gifted wood worker, a talented musician, and considered himself Bing Crosby's #1 fan. His huge presence, endless optimism, and passion to serve and love God, family, country, and fellow man will be timeless in the hearts he touched.
William is survived by his wife, Elizabeth Huffman of Colville; son, Frederick Huffman (Frances "Tish") of Colville; daughter, Kathleen Jones (Douglas) of Chattaroy; son-in-law, Rick Hanson of Colville; grandchildren, Rosalee Rose of Coeur d'Alene, Idaho, Christina Huffman of Post Falls, Idaho, Felicity Huffman of Texas, Melissa Huffman, Joshua Jones of Kettle Falls, Washington, Karen Bryant of Stillwater, Oklahoma, Nathan Hanson of Kent, Washington, William Hanson of Colville, Alex Hanson of Boise, Idaho, and 25 great-grandchildren.
William is preceded in death by a grandson, Jacob Jones and a daughter, Laurie Hanson.
The funeral service for Mr. William Wyland Huffman began at 10 a.m., Saturday, July 10, 2021, at the Colville Community Church. Reverend Frederick Huffman and Reverend Dr. Douglas Jones officiated.
A graveside service and vault interment followed at the Mountain View Park Cemetery in Colville, WA. Memorial contributions may be given to the American Bible Society.
Please visit the online memorial and sign the guestbook at www.danekasfuneralchapel.com. Danekas Funeral Chapel & Crematory is entrusted in care.
Published by The Statesman Examiner from Jul. 13 to Jul. 14, 2021.
To plant trees in memory, please visit the Sympathy Store.
MEMORIAL EVENTS
Jul
10
Funeral service
10:00a.m.
Colville Community Church (UMC)
930 S. Elm St, Colville, WA
Funeral services provided by:
Danekas Funeral Chapel & Crematory - Colville
MAKE A DONATION
MEMORIES & CONDOLENCES
Sponsored by Danekas Funeral Chapel & Crematory - Colville.
0 Entries
Be the first to post a memory or condolences.