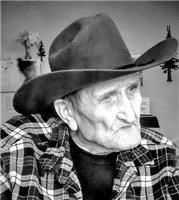 BORN
1922
DIED
2021
William (Bill) Lloyd Small went home to his heavenly family on  Sept. 20, 2021, at the age of 99.
He was the last surviving member of his family.
He was born  Sept. 1,1922, in Elkhart, Kansas, to Sherman Curtis Small and Grace Pearl  (Craver) Small; he was the third of six children.
At a very young age, Bill was interested in horses, an interest that he maintained throughout his life.
Also at a young age, he bought chickens, pigs and cows. He earned money to buy the feed by milking the neighbors cows, scraping bark from trees, selling vegetables in town and working a paper route.
He belonged to 4-H, a drama club called Mask and Mirror, and was a Boy Scout. He later served as a Boy Scout Leader for many years.
Because times were hard, Bill spent most of his childhood moving with his family following work opportunities.
They finally arrived in Paonia, Colorado, where work was steady.
Bill attended school from the 8th grade until he graduated in 1940 with a full ride scholarship in Drama and Theater.
His desire to be a cowboy was stronger than his desire for acting.
After graduation, and until he enlisted in the Marines, Bill worked and played at Ragged Mountain in Gunnison, Colorado, and on "The Muddy." He spoke of The Muddy fondly through out his life.
Bill served as an anti-air craft gunner in the South Pacific during World War II, from 1942 until 1945 when he received an honorable discharge.
He joined the Marines before being drafted because he wanted to choose his branch of service. He never spoke much about his time in the service, but he was very patriotic and loved this country.
When people thanked him for his service, he was uncomfortable and said, "I only did what was right."
Returning from the war, his main priority was finding a house and a wife to share it with, and forget about the war.
He did just that he married Maurine Long on  June 20, 1947.
In 1953, Bill and Maurine, along with their two daughters, moved to Seattle, Washington, where he worked for Boeing for several years before joining the logging industry as a faller.
In 1966, the much larger family moved to Deer Park.
Bill worked at Kaiser Aluminum for several years, but the call to be a rancher/cowboy was still in his heart.
He then moved the family to Inchelium, Washington, where they resided for several years before moving to Oroville, Washington.
Bill eventually settled in Fruitland, Washington, where he resided for over 24 years.
Published by The Statesman Examiner from Sep. 28 to Sep. 29, 2021.
To plant trees in memory, please visit the Sympathy Store.
MEMORIAL EVENTS
Sep
30
Graveside service
1:00p.m.
Hall Creek Cemetery
Cobbs Creek Lake Rd., Inchelium, WA
MAKE A DONATION
MEMORIES & CONDOLENCES
0 Entries
Be the first to post a memory or condolences.