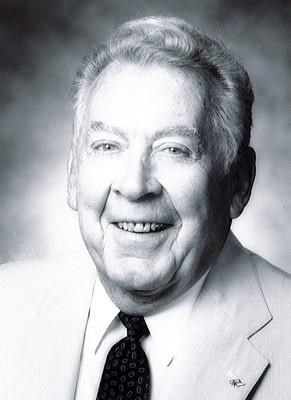 Salem, OR - Born in Grants Pass, OR, January 19, 1919. Educated in public schools and graduated in June of 1936, which was the last class to graduate from Salem High School when located at present site of Macy's. Was one of the last three sport lettermen at Salem High School in football, basketball and baseball. Attended college freshman year at San Mateo Junior College. Graduated Willamette University in 1940 and attended Willamette College of Law in 1940 and early 1941 before entering the United Sates Navy pre flight in April 1941.

Commissioned Naval aviator in 1942 and saw extended combat action as a fighter pilot aboard the U.S.S. carrier Lexington in the South Pacific. He was awarded the Navy Cross and three Distinguished Flying Crosses and shot down seven Japanese planes. He was a member of the American Fighter Aces Association. In May of 2018 he was flown back to Washington D.C. and was presented with the Congressional Gold Medal of Honor.

Returned to Willamette University College of Law and graduated in 1948. Was admitted to the Oregon State Bar January 1, 1948. For 21 years was associated as a partner with late Judge Otto R. Skopil. In 1972 the firm was Williams Skopil Miller Wyllie Beck and Parks P.C. in 1973 after Judge Skopil was appointed as a member of Circuit Court of Appeals he reorganized to Bruce W. Williams P.C. 1976 the firm grew to Williams and Spooner P.C., in 1978 it was Williams Spooner and Graves P.C., in 1983 it became Williams Spooner and Much P.C.

He was appointed as Chairman of the Liquor Control Commission in 1955. Other positions held included President of the Northwest Division of Horsemen's Benevolent Association in 1972; President of the Oregon Thoroughbred Breeder's Association, 1975-77; National Federation of Insurance Counsel President 1979-80; member of the International Society of Barristers. Was long-time trial counsel for State Farm Mutual in Salem beginning in 1952, when with Judge Skopil, the firm was active in acquisition of the properties where State Farm Company had its regional office.

He was long active in garden activities; Little League Baseball; he enjoyed fishing of all kinds; and was one of the original three Salem men who incorporated and constructed Illahe Hills Country Club.


Published by The Statesman Journal on Dec. 23, 2018.
To plant trees in memory, please visit our Sympathy Store.
MEMORIAL EVENTS
To offer your sympathy during this difficult time, you can now have memorial trees planted in a National Forest in memory of your loved one.
Funeral services provided by:
City View Funeral Home and Cemetery
MAKE A DONATION
MEMORIES & CONDOLENCES
Sponsored by City View Funeral Home and Cemetery.
7 Entries
Dear Carol,
I read today about the passing of Bruce. I am so sorry for the loss of your loving and devoted husband. The love and kindness that was shared between the two of you was a gift, and one that you shared with me. I was a lucky person to be a part of your lives as I delivered your mail. My heartfelt sorrow and prayers to you.
Sandy
Sandy Anderson
January 6, 2019
Sandy Anderson
January 6, 2019
I offer my sincere empathy to Mr. Williams' family. I hope you will please read the encouraging words at John 6:40 to receive comfort, a peaceful heart and gain the wonderful knowledge of the future prospects ahead for you and your loved ones.
Irene
December 29, 2018
So sad to read of Bruce's passing. I have picture of when I was in high school and I am holding brand new baby Darby. Special times when they lived across street from my parents off S. Myers Street. And a lovey pre wedding dinner with Carol & Bruce before my wedding to Bob Shepard. Love to the Williams family.
JoAnn Hoover Shepard
JoAnn Hoover Shepard
December 28, 2018
I am so sorry for the loss of your loved one. Please find peace and comfort in Psalms 119:76.
December 25, 2018
The world lost a great man! Rest in peace Mr. Williams. Selena Farmer
Selena Farmer
December 23, 2018
My deepest condolences to the family and friends of Bruce W. Williams. May God the hearer of prayers comfort you and give you strength to endure during this difficult time. 2 Cor 1:4
December 22, 2018
Showing 1 - 7 of 7 results