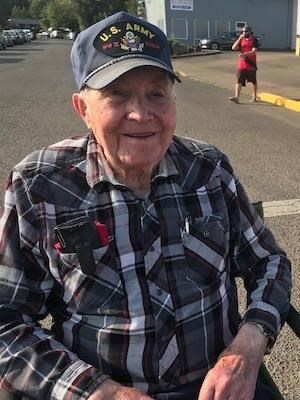 Sheridan - Edwin Milton Roten, 101, died early Thursday, January 14, (just 8 days short of his 102 birthday) at a care home near Sheridan, OR. He was preceded in death by his first wife, Florene, and second wife, Verna, and nine brothers and sisters. He is survived by a sister, Jane Postel of Ogden, UT, two children, Barbara Morley of Willamina, OR, and Robert Roten of Laramie, WY, two grandchildren, and two great-grandchildren.

He was born Jan. 22, 1919 in Willcox, AZ, one of eleven children. He grew up as a cowboy on cattle ranches near the remote town of Klondyke, AZ.

He moved to Oregon in the late 1930s. After serving in the Army Air Corp in WWII. He made a good living working at the Freres Lumber Company in Lyons, working there more than three decades until he retired. In 2005, he moved to Willamina, to be near his daughter, Barbara, who cared for him in his last years.

He was an avid fisherman and hunter, and walked every day for at least a mile, well into his late nineties. His Christian faith also sustained him his whole life. He faithfully served in the church for decades, as long as he was able to. He attended the Willamina Christian Church in his later years.

A Memorial Service for Edwin Milton Roten will be held on Sunday, May 23, 2021. It will be at 3:00 pm at the Willamina Christian Church, all are welcome.


Published by The Statesman Journal from Jan. 16 to May 18, 2021.
To plant trees in memory, please visit the Sympathy Store.
MEMORIAL EVENTS
To offer your sympathy during this difficult time, you can now have memorial trees planted in a National Forest in memory of your loved one.
Funeral services provided by:
Best Funeral Services, Inc.
MAKE A DONATION
MEMORIES & CONDOLENCES
Sponsored by Best Funeral Services, Inc. West Valley Chapel.
0 Entries
Be the first to post a memory or condolences.