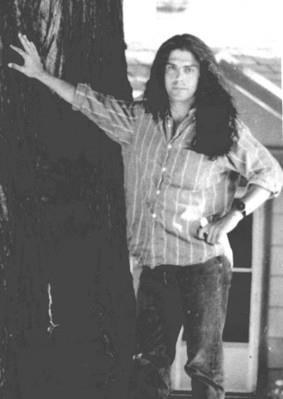 Salem` - George Russell Cook, "Georgie" 51, has finally, "come in out of rain" and rests with our father in heaven. George died on November 9th on the streets of Salem Oregon. He leaves behind many loved ones, including his mom Vicki and papa Bruce; children Elicia ,Sara and grandchild Oceania; and brothers and sisters Sharmon, Marietta, Bill, Mark, Rick, Jimmy and Anita. He is also survived by many uncles, cousins, aunts and the proud members of the Confederated tribes of Siletz. He was preceded in death by his father James, his brother Eddy and his beloved Dawn.

George loved fishing, biking, all things mechanical and above all telling his magical stories. His passion in life was caring for others and doing what he could for them. George was involved in a serious car accident in 2013 and lost part of his leg. His main goal ever since has been to get back up on that bike.

George spent the last twenty plus years of his life "Homeless". Like so many of the homeless, George suffered with mental health and substance abuse issues. The national data shows that 46% of those who are homeless suffer with these same two problems. Mental illness touches all of us in this nation. Those that suffer from these illnesses should not be disregarded as "Hopeless". Like so many millions in this country, for one reason or another George did not get the help he and others like him should be entitled to.

There will be a memorial service to honor George on Monday November 27th at 11:00 am at the Keizer Funeral Chapel. A reception will follow in the parish hall at Saint Timothy's church in Salem. The family has requested that in lieu of flowers donations can be sent to the United Gospel Mission.

On a personal note, George met the above statistics in that he was homeless for more than 20 years; struggled with serious mental illness and addictions; and chronic health conditions. Often George was referred to services, but there was not enough bandwidth in these services to meet his needs. He needed specialized service to meet his complex needs, like many other individuals with mental illness.


Published by The Statesman Journal from Nov. 19 to Nov. 20, 2017.
To plant trees in memory, please visit our Sympathy Store.
MEMORIAL EVENTS
Nov
27
Memorial service
11:00a.m.
Keizer Funeral Chapel
4365 River Road North, Keizer, OR
Funeral services provided by:
Keizer Funeral Chapel
MAKE A DONATION
MEMORIES & CONDOLENCES
Sponsored by Keizer Funeral Chapel.
8 Entries
we lost my nephew last weekend to this same pattern . I am heartbroken..He was a member of the Cheyenne- Arapaho tribe.
April 20, 2020
I have struggled tonight my dear brother. I love you! Pulling the music together, trying to keep myself together. Thinking of all the good times. The smiles, the laughter, the tears. We faught, we played, we dreamed. Dreamed as siblings do.
I went to moms today. I could not put this off any longer. It hurts. I know you , I have known you my entire life up until the day the lord took you away. You are now in, out of the rain.
Sharmon Cook-Wright
November 26, 2017
Our heart goes out to you all and we will be thinking of you, even though there are many miles between us.
Much love,
Jim and Jane
November 25, 2017
Mama-j
November 21, 2017
I love you George. I will always remember the laughter and hijinks. You worked hard and loved hard. Bless you buddy.
Mary Ann Cottingham
November 21, 2017
I never knew George and yet touched by his journey and the love I'm sure he received from his family. May we all open our hearts to those who live a challenged life and never turn a way from suffering. His love will never die and may we continue to support others. Jerry Braza
Jerry Braza
November 21, 2017
Do Not Stand At My Grave And Weep