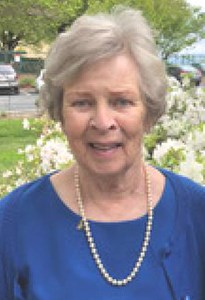 Martha, born in June, 1941, was a loving wife and mother. She was surrounded by love when she died peacefully in her home, after a long battle with metastatic breast cancer. Her strong spirit helped to make each day special even through her constant battle of health issues.

Martha grew up in Statesville, and met her future husband at Erskine College. After they were married in June of 1963, they moved to Charlotte, where Steve was a pastor. In 1968, her husband joined the U.S. Navy and they were off on a life full of adventure. In 1988, she became a civil servant working in the Navy Annex and the Pentagon. She retired in 2004 as the Public Affairs Officer for Naval Station Mayport in Florida.

Even though they lived many different places, Martha's heart was always in Statesville where her parents, Sam and Peggy Laws, had lived and she and her family would visit every year.

Martha was preceded in death by son, David.

She is survived by her husband, Steve; daughter, Lyn; brother, Sam Laws; and sister-in-law, Debi Laws.

A memorial service will be held at First Presbyterian Church of Durham at 1 p.m., Saturday, Oct. 16. Attendees are required to wear a mask.

In memory of Martha, donations can be made to Children's Hope Alliance, P.O. Box 1, Barium Springs, NC 28010; or First Presbyterian Church of Durham.

Cremation Society of the Carolinas