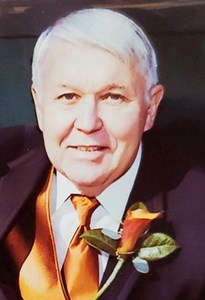 He was born in Iredell County, Feb. 7, 1947, to Samuel and Dorothy London Beam. Alex was preceded in death by his parents and his granddaughter, Eden Tilton.

Alex was a graduate of Mooresville Senior High, King's College and Davidson College. He was owner of Beam Distributors Trailer Sales and curator at Memory Lane Museum. He was a Fireman, Lions Club member, car club member, and church elder.

Funeral services will be held in Cornelius at Bethel Presbyterian Church at 3 p.m., Thursday July 22.

The family request no flowers, instead donations be made to Samaritan's Purse; or Billy Graham Evangelistic Association.

www.cavin-cook.com
Published by Statesville Record & Landmark on Jul. 18, 2021.
To plant trees in memory, please visit the Sympathy Store.
MEMORIAL EVENTS
Jul
22
Funeral service
3:00p.m.
Bethel Presbyterian Church
Cornelius, NC
Funeral services provided by:
Cavin-Cook Funeral Home & Crematory
MAKE A DONATION
MEMORIES & CONDOLENCES
Sponsored by Cavin-Cook Funeral Home & Crematory.
5 Entries
Mr. Beam was such a good person. He was a good friend to my parents. He will be missed in the community. I'm so sorry for your loss. Godspeed
Ann Moody
Friend
July 22, 2021
Daisy, Travis and family, We are sorry for your loss and are thinking about you during this difficult time. We will be praying for your family! Bryan & Tracie Persinger
Bryan & Tracie Persinger
Friend
July 21, 2021
Dear Daisy and Family, We are so very sorry about the loss of Alex. Your family is in our thoughts and prayers.
Darlene Patterson, Jeremy Patterson, Tracey Patterson
Friend
July 19, 2021
Daisy and Family, I am so sorry to hear of Alex's death. May God be with you in your time of grief. Memory eternal
Geri Garrard
July 18, 2021
Daisy and family, Keith and I are so sorry for your loss. Keith has always said Alex steered him to his career path by working with him many years ago. He always thought so much of Alex and you. He said they had many good days together on the truck. Heaven gained one of the best. May God give you a peace that surpasses all understanding , now and in the days to follow.
Keith and Debbie Roach
Friend
July 18, 2021
Showing 1 - 5 of 5 results