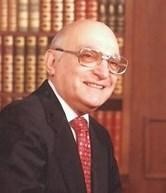 BORN
July 24, 1918
DIED
May 20, 2015
Alpern, Erwin Erwin Alpern died May 20, 2015 in St. Louis, Missouri, formerly of Oklahoma City, Oklahoma. He was a devoted and loving husband to his wife, Adell Hardin Alpern since 1949, and is lovingly remembered by his daughter Darien (Stephen) Arnstein in St. Louis and his two grandsons, Jonathan and Benjamin Arnstein in New York City. Erwin's two siblings, Shirley Lebow Hellman and A. Melvin Alpern, predeceased him. Erwin and Adell moved to St. Louis in 2007 to be closer to family, but they always remained connected to their Oklahoma City roots. Erwin Alpern was born July 24, 1918, in Pittsburgh, PA, the eldest son of Nathan Alpern and Elizabeth Abramson Alpern. His family moved to Oklahoma City in 1927, and Erwin attended Wilson grade school, Harding Junior High and graduated from Central High in 1936. He graduated from the University of Oklahoma in 1940 with a BS degree in Business Administration, and received his law degree from Yale Law School in 1946. Erwin was admitted to the Oklahoma Bar in 1942 and received his certificate as a Certified Public Accountant in 1949. He has been a long-standing member of the Oklahoma and American Bar Associations and the American Institute of Certified Public Accountants. He entered the US Army in June, 1942 and served until 1946 in the Army Finance and Army Air Corps when he was discharged as a 1st Lieutenant. He was recalled to service in 1950 during the Korean War and served as an instructor in the Army Finance department until discharged in 1952. In 1946 he joined T. Dwight Williams and Co., certified public accountants, and in 1947 opened his own law office. Erwin practiced as an attorney with Delmer L. Stagner until 1966 when he went to Washington, D.C. as assistant to the Federal CoChairman, William M. McCandless, of the Ozark Regional Commission. He returned to Oklahoma City in 1969 and practiced law and then became of counsel with the firm Spradling, Alpern, Friot and Gum through 2005. Erwin's ethics, integrity and dedication were his hallmark; he served as a role model for many young attorneys with his high standards for legal work. A life-long member of Emanuel Synagogue, where he was a member of the Board of Directors for many years, and served as a Trustee of the Endowment Fund and as a member of the board of Trustees of the B'nai B'rith Hillel Foundation Endowment Fund. He was a past president of the Oklahoma City Jewish Community Council, president of the Oklahoma City B'nai B'rith Lodge, chairman of the Oklahoma City unit of the American Jewish Committee, and president of the Oklahoma City chapter of the Zionist Organization of America. Services: Funeral services will be held on Tuesday, May 26th at 11:00 a.m. at Emanuel Synagogue, with burial service to follow. Contributions are requested to Emanuel Synagogue Endowment Fund, 900 N.W. 47th Street, Oklahoma City 73118.

To plant trees in memory, please visit our Sympathy Store.
Published by St. Louis Post-Dispatch on May 24, 2015.
MEMORIAL EVENTS
May
26
Funeral service
11:00a.m.
Emanuel Synagogue
May
26
Burial
Emanuel Hebrew Cemetery
Funeral services provided by:
Hahn-Cook/Street & Draper Funeral Directors
GUEST BOOK
7 Entries
Wonderful tribute to your Dad. He was a wonderful husband and truly dedicated to his commitments.
Ramona Alpern
May 30, 2015
I have wonderful memories of your Dad and Mom! They were always so gracious and warm whenever I was in Oklahoma City. They were a very special couple! So happy I had the opportunity to get to know both of them. Sending deepest sympathy on your loss but know Erwin's life was a blessing and to be celebrated! Sending our love to you and our condolences to the entire family. Fondly, Jan and Richard Baron
Richard and Jan Baron
May 28, 2015
My sincerest condolences to the Alpern Family. May the God of all comfort (Psalms 83:18) help you during this difficult time.
May 27, 2015
A great and gentle man. I learned a lot from him in the practice of law and will miss him. Sincerest condolences.
Scott Spradling
May 27, 2015
My condolences on your loss. I appreciated learning of his wonderful accomplishments as I never had the opportunity to know him in life.
Maia Alpern
May 26, 2015
The obituary was such a tribute to a so very sweet caring man. My parents thought the world of him . So thankful he was a part of my family's lives. May your family accept my condolences
cheryl robinson
May 24, 2015
Darien, Debbie sent me news of your Dad's death. I'll always remember the graciousness and warmth with which your folks took me in: a
(young) 20something Jewish journalist in the wilds of Oklahoma.
It never felt forced. A home far away from home. A lovely, lovely memory.
Lynn Engelhardt
May 24, 2015