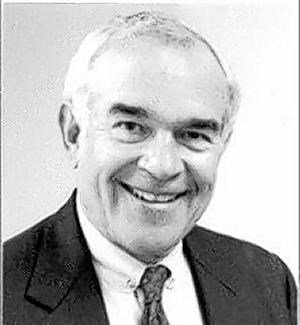 BORN
1933
DIED
April 16, 2017
Bond, Arthur D., Jr. 10/26/1933 - 04/16/2017 Born October 26, 1933 to Elizabeth Green and Arthur Doerr Bond, of Mexico, MO, Arthur D. Bond Jr. beloved husband of Molly Graham Bond (deceased) from Kansas City, MO for 58 years, passed away on April 16th. He is survived by his brother Christopher (Kit) Bond and his three children: Arthur Bond III, Graham Bond and Andrea Wilson and their spouses; Amelia Bond, Jim Profirio and Reading Wilson along with his grandchildren; Carly Bond, Tucker Bond and Maddie Wilson. Art attended Deerfield Academy and Princeton University ('55). Succeeding college, he was a fighter pilot in the U.S. Air Force. He later attended The Harvard Business School after which he and Molly settled in Cambridge, MA. where they resided for the balance of their lives. A recognized leader in the financial community, Art began his career as a financial analyst with Dewey and Almy Chemical Company and later as a Portfolio Manager and Chief Financial Officer at Massachusetts Financial Services (MFS). He was Chairman of the Board and strongly supported the New England Baptist Hospital. Art also served as Chairman of the Board at the Cambridge Trust Company for many years. Throughout his life, Art was a talented athlete and loved travelling with his wife, running, playing golf, boating and fishing with his children and grandchildren. He had a quick wit and enthusiasm for life that endeared him to many. He will be dearly missed. In lieu of flowers the family suggests that donations be made in his honor to: The New England Baptist Hospital - 125 Parker Hill Avenue, Boston Ma.02120 (617) 754-6362. http://www.nebh.org/donateonlinewww.NEBH.org/donateonline
To plant trees in memory, please visit our Sympathy Store.
Published by St. Louis Post-Dispatch on May 1, 2017.
MEMORIAL EVENTS
May
19
Service
11:00a.m.
St. Paul's Episcopal Church
15 St. Paul St, Brookline, Massachusetts
GUEST BOOK
8 Entries
My wife and I want to extend our sympathy to Art's family. I knew Art at Princeton and later as a classmate at Harvard Business School. He was a fine man and a good friend who helped us celebrate our marriage as an usher at our wedding fifty-seven years ago.
Jane and Peter Barrett
Bellevue, Washington
July 12, 2017
So sorry for your loss Andrea. I remember his helpfulness when I was at Dana Hall with you and having spent my career in Financial Planning, MFS is well know to all of us at Morgan Stanley. I hope to catch up with you sometime.
Melanie Regner
May 25, 2017
To the Bond Family-Sending our condolences! Roger S. passed along this news today and I am sorry for the loss of your Dad. Thinking of you,
Krysia Gallagher
Krysia Gallagher
May 19, 2017
My thoughts are with your family. It was a nostalgic loss for me - your mom, Molly, and I grew up across the street from one another and were dear friends as children. I did not know that she, too, was gone. Please accept my prayers.
Joe Ann Kratchman
May 3, 2017
How sad to read of Arthur's passing. My strong thoughts and prayers are with all of you and him! I was privileged to provide investment research to Art and all of his great associates for 30 plus years. MFS has long been a superb organization and I treasure the friendships I have had over those many years. Art was one of the best. The picture shows again that great smile which was always there. He was one of the classiest fellows I ever met, incisive, friendly, and an astute investor. So many of the older group have gone from us. But it brings joy to us to recall some of the memories of them. As an aside I grew up in Brookline and the church , St Paul's, I'm fairly certain, was built by my father's family many , many years ago.