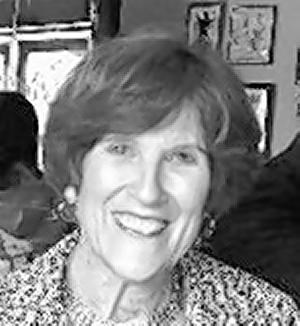 ABOUT
John Burroughs High School
FUNERAL HOME
Gerber Chapel
23 W Lockwood Ave
Webster Groves, MO
Kimball, Carol Lobb Carol Kimball died peacefully on December 15, 2016. She was born December 25, 1939, in Rochester, Minnesota. She was raised in Madison and Milwaukee, Wisconsin. Carol studied in Geneva, Finland, and Paris and graduated from Smith College before earning a Master's degree at the University of Chicago. During 33 years of marriage Carol and her husband, David, lived in Chicago, Milwaukee, the Netherlands, and England, before settling in St. Louis in 1980. Carol was on the faculty of John Burroughs School for almost 20 years as a librarian. She served on the board of Opera Theatre of Saint Louis for over 30 years and as President of the Opera Guild for three years. Among her most significant contributions was founding Opera Theatre?s docent program, now in its 27th year, which allowed her to share her love of opera with teachers and students across St. Louis. Carol also served on the board of the Alliance Francaise de Saint Louis. She was a life-long sports fan, especially of the Green Bay Packers, a talented tennis and paddle tennis player, and an ardent dog-lover. Carol was the daughter of the late Mary Montgomery Lobb and John Cunningham Lobb, wife of the late David W. Kimball, Jr. and mother of Mary M. Kimball (Daniel Fey) of Seattle and David C. Kimball (Laura Arnold) of St. Louis. She was the sister of the late Josephine Lobb Adamson Clark (Bruce) and sister-inlaw of the late Elizabeth Kimball Wanders (Hans). She is survived by five grandchildren, four nephews, three great-nieces and three great-nephews. Carol delighted in her family and was a loving and understanding presence in their lives. In lieu of flowers, please send donations in Carol's memory to Opera Theatre of St. Louis at www.ExperienceOpera.org. Services: Noon on January 17, 2017, at Emmanuel Episcopal Church, 9 South Bompart, Webster Groves, MO GERBER CHAPEL
Published by St. Louis Post-Dispatch from Dec. 27 to Dec. 28, 2016.
To plant trees in memory, please visit the Sympathy Store.
MEMORIAL EVENTS
To offer your sympathy during this difficult time, you can now have memorial trees planted in a National Forest in memory of your loved one.
Funeral services provided by:
Gerber Chapel
MAKE A DONATION
MEMORIES & CONDOLENCES
5 Entries
I learned of Carol's death around Christmas time. Life was so hectic then that I can't remember if I acknowledged your announcement.

We were close friends in Comstock House for four years and kept up ever after. In addition to Christmas newsletters, I frequently visited my elderly mother in St. Louis, and we got together for lunch.

Carol was so intelligent and serene. I really miss her.

Louise Franklin '61
Atlanta
April 3, 2017
Carol added such much-needed calm, wisdom, humility, and kindness to the Burroughs community while she worked there and continued to bless us with her suggestions, observations, insights, and friendship at our faculty book club after she retired. I enjoyed hearing about her family and extensive, active life beyond JBS, as well. We have been missing her already. If I feel a loss, I imagine yours is so much greater, but I am certain that her family members have many, many fond memories that will continue to enrich their lives. Please accept my condolences on her passing.
Susan Dee
January 7, 2017
My sympathy goes out to the family during your time of grief. May God's loving-kindness comfort you and help you through this difficult time. (Psalm 119:50,76)
A. M.
December 30, 2016
So sorry for your loss, Mary and family. She was so loved by many. You are in our thoughts and prayers.
Arlene Maminta Browne
December 28, 2016
Sorry for your loss may you draw comfort from Gods word at Hosea 13:14. L Ohio
December 27, 2016
Showing 1 - 5 of 5 results