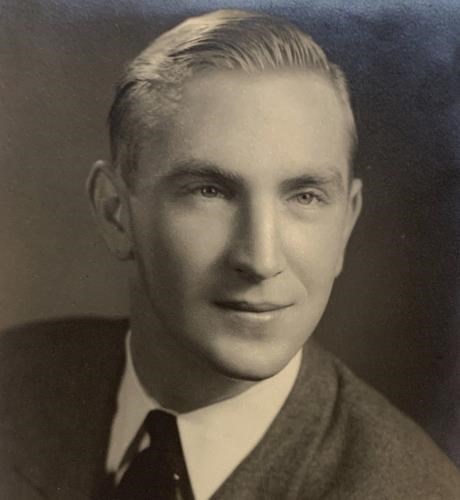 Dan was born in Michigan on January 2, 1925. He moved to Webster Groves, MO with his family as a young child & was a Webster Groves High School graduate. He then attended Georgia Tech University before joining the United States Army as a paratrooper in World War II. Dan proudly served his country in the European Theater, taking part in the Battle of the Bulge. He was a Purple Heart recipient and received 5 bronze stars. After the war, Dan completed his civil engineering degree at Washington University in St. Louis. An avid golf & tennis player, Dan was playing tennis in the Senior Olympics well into his late 80's. A sports fan through & through, he deeply missed both the baseball & hockey 2020 seasons.

He was preceded in death by his parents, Newbold & Helen (nee Colter) Pierson, his brothers Colter & Aaron, & sister Margaret.

In lieu of flowers, the family asked the donations be made to the Greater St. Louis Honor Flight, who treated Dan to a most monumental & impactful trip in 2019.

To plant trees in memory, please visit our Sympathy Store.
Published by Post - Dispatch on Jul. 15, 2020.
MEMORIAL EVENTS
No memorial events are currently scheduled.
To offer your sympathy during this difficult time, you can now have memorial trees planted in a National Forest in memory of your loved one.
GUEST BOOK
4 Entries
Rest In Peace, dear Uncle Dan. My namesake, my hero.
Daniel Pierson Hatcher, Maj. US Army (ret)
Family
August 8, 2020
Jeff, Tracy, Scott,

So very sorry to hear of the passing of your father. I remember him (I recall he was our Cub Scout Webelo leader and taught me how to properly tie a square knot) and your mother very fondly, particularly all the good times we had playing as kids on Crest Court, and spending our summers out at Cool Dell pool. One of the things I laugh about to this day is the time Jeff, Scott, and I were playing up in the woods that overlooked Craig Drive, after a St. Louis snow. One of us (who will remain nameless) made a huge snowball and tossed it into the air with perfect timing for it to land right in the middle of the roof of a VW microbus passing by. I can't imagine what a sound that made inside that VW but, by the time the driver stopped, we were all approaching Woodbine as fast as our little 10-year old legs would carry us. Again, very sorry for your loss, but your father sure lived a full and distinguished life.
John Barthelmass
Friend
July 18, 2020
What a great man and hero! The family should be so proud! Hugs to all of you. Heaven has a wonderful new angel !
Terry and Ritch Vernon
Friend
July 16, 2020
I didn't know Daniel, but I know his wonderful daughter Tracy who is a loving and caring person. I am sure she got that from her parents. So sorry for your lose Tracy, we love you. Jim and Joan Belcher.
Jim Belcher
Friend
July 15, 2020