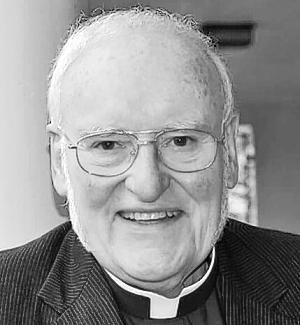 FUNERAL HOME
Lupton Chapel - St. Louis
7233 Delmar Blvd.
St. Louis, MO
Salmon, The Right Reverend Edward Lloyd, Junior The Right Reverend Edward Lloyd Salmon, Junior, a longtime bishop in the Episcopal Church, died on June 29, 2016 after a lengthy battle with cancer, at the age of 82. Bishop Salmon, a Phi Beta Kappa graduate of the University of the South, in Sewanee, TN (C'56), and Virginia Theological Seminary (T'60), had his first job taking care of three small missions in Northwest Arkansas. He built the church in Rogers into a parish, and then moved to Fayetteville to be the assistant at St. Paul's; when the then-rector retired, he became rector. After 11 years in Fayetteville, he accepted a call to be the rector of the Church of St. Michael and St. George, in St. Louis, Missouri. Ten years later, he was elected on the first ballot to be the 13th bishop of the Diocese of South Carolina, a position from which he retired after 18 years, in 2008. He came out of retirement several months later to serve as the interim Dean of Nashotah House Theological Seminary, in Nashotah, Wisconsin, then moved to Chevy Chase, Maryland, to become the interim rector of All Saints' Church. From there, he returned to Nashotah House and became the 19th Dean and President; he retired from that position in January 2015. During his 55 years in ordained ministry, he served on many boards, including: Kanuga Camp and Conference Center, which he chaired for a term; Sewanee: The University of the South, where he also served a term as regent; Nashotah House Theological Seminary, where he was chairman for thirteen of his 22 years on the board; and The Anglican Digest, where he was chairman for 41 of his 44 years on the board. He is survived by Louise, his wife of 43 years, daughter Catherine, son Edward III (Theresa), and three grandchildren: Fiona, Celia, and Edward IV. He is also survived by family members from Natchez, Mississippi: sister Sarah, sister-in-law Virginia, niece Amelia (Ben), nephew Burl (Bob), and great nephew Gibson. Services: The funeral will be held at the Church of St. Michael and St. George, 6345 Wydown Boulevard at Ellenwood, Clayton, on Thursday, July 7 at 7:00 p.m.; a reception will follow in the Great Hall. There will not be a visitation; however, for those who wish to pay their respects or say a prayer, there will be a vigil kept at the Church of St. Michael and St. George, beginning at 5:00 p.m. on Wednesday, July 6 and ending at 5:00 p.m. on Thursday, July 7. In lieu of flowers, memorials may be sent to The Anglican Digest, 805 County Road 102, Eureka Springs, Arkansas 72632-9705. Any clergy wishing to vest and process at the funeral should be vested in cassock, surplice, and white stole. A SERVICE OF THE LUPTON CHAPEL

Published by St. Louis Post-Dispatch from Jul. 3 to Jul. 6, 2016.
To plant trees in memory, please visit the Sympathy Store.
MEMORIAL EVENTS
To offer your sympathy during this difficult time, you can now have memorial trees planted in a National Forest in memory of your loved one.
Funeral services provided by:
Lupton Chapel - St. Louis
MAKE A DONATION
MEMORIES & CONDOLENCES
8 Entries
My most sincere condolences. Bishop Salmon had a profound influence on me on terms of what it means to be an Episcopalian. He will be missed, but never forgotten. Betsy (Minnis) Hayman
July 11, 2016
When I saw Fr. Salmon recently, I told him who I was and he remembered me. I think that is a testimony to the caring person he was. Also, when I informed him of my mother's death, he said, "I wish you would have told me. She was a wonderful person". I was very touched by his kindness and his recollection of my mom. My condolences to all the Salmon family.
Kathy Krause
July 8, 2016
Ed stood by me at a very crucial time in my life. He gave me the courage to speak my truth regardless of the outcome, simply because it was the right thing to do. While the situation didn't turn out as I intended, it was the making of me, giving me a degree of personal autonomy and integrity that has stood me in good stead for the last thirty years. I will always be profoundly grateful for Ed's presence in my life.
Betsy Fordyce
July 6, 2016
One of my favorite memories of this gentle man is of him visiting our home during early sixties because "nobody else is still awake!" Another is being blessed to care for Louise during labor & birth of their first child. Heaven is a more welcome home with you in it, blessings to all.
Martha Barnes
July 6, 2016
Bishop Salmon was very good to my husband in his transition from the Roman Catholic priesthood to priesthood in the Episcopal Church. He was a fine leader. I imagine the funeral liturgy for him will be one for the ages. Grieve for his passing but celebrate his long and necessary life. The Rev. Dr. & Mrs. Raymond Potter, Sacramento, California
July 3, 2016
Prayers are going up for Catherine and the other members of Bishop Salmon's family at this time of loss. I know this is a loss for the Church also, as Bishop Salmon contributed so much. May his soul and the souls of all the departed through the mercy of God rest in peace.
Magdalena Aders
July 3, 2016
Bishop Salmon, may you Rest in Heaven. Wonderful Man...

Dr. Stacey Settle.
July 3, 2016
And Jesus said, "Let not your hearts be troubled. Believe in God; believe also in me. In my Father's house are many rooms. If it were not so, would I have told you that I go to prepare a place for you? And if I go and prepare a place for you, I will come again and will take you to myself, that where I am you may be also." John 14:1-3
Tiffany Tergesen
July 3, 2016
Showing 1 - 8 of 8 results