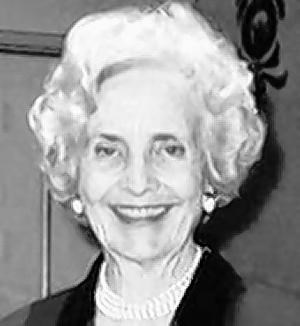 Schlafly, Eleanor Lyons a prominent Catholic civic leader and activist, died on October 31, 2018 . She was 98. Miss Schlafly was born in St. Louis on December 21, 1919, the fourth child and only daughter of John Frederick and Eleanor Lyons Schlafly. Like her, her parents and her brothers, Fred, Daniel, and Robert, all of whom predeceased her, distinguished themselves in a variety of civic causes. She graduated from Villa Duchesne in 1938 and, after studying two years at the Manhattanville College of the Sacred Heart in New York, graduated from Saint Louis University in 1942, one of the very few women in her class. Miss Schlafly was one four special maids of honor at the 1939 Veiled Prophet Ball in St. Louis. In 1945, she served in the American Red Cross at Fort George Wright Hospital in Spokane, Washington, providing arts, crafts, sports therapy, and counselling for wounded soldiers. She continued to volunteer for the Red Cross in St. Louis after the war. Miss Schlafly lived in New York from 1950 until 1956, where she worked for the Assembly of Captive European Nations, dedicated to freeing Soviet-ruled countries from Communist rule. In 1958 she co-founded the Cardinal Mindszenty Foundation in St. Louis with her brother Fred Schlafly, her sister-in-law Phyllis Schlafly, and Father Stephen Dunker, C.M, as an independent Catholic organization to oppose Communism and to promote traditional religious, family, social, and patriotic values. Under her leadership from 1958 to 2012, the Cardinal Mindszenty Foundation organized conferences, workshops, trips, and benefit dinners, published brochures and newsletters, broadcast a radio program, and took public stands on many contemporary issues. By 1969, the Foundation had several thousand members in 42 states. The culmination of Miss Schlafly's and the Foundation's work came in 1974, when Cardinal Mindszenty personally visited her home in St. Louis. Miss Schlafly was active in many other civic and charitable causes. She was president of the Villa Duchesne Alumnae and received the Très Bien Award honoring the school's distinguished alumnae. She was active in the Junior League, was a member of the Desloge Hospital Guild, the St. Louis Symphony Society, the Catholic Women's Club, and the Saint Louis University Women's Council, and served as a director of Cardinal Glennon Children's Hospital. She was honored as a St. Louis Globe-Democrat Woman of Achievement. Miss Schlafly excelled in several sports: riding, tennis, swimming, softball, figure skating, and field hockey. In 1940, she was selected to play for the St. Louis Field Hockey Club against the United States Field Hockey team. She continued ballet lessons until her later years. She had a spirit of adventure and travelled extensively in the United States, Europe, Russia, and Latin America. She was devoted to her many relatives and friends, especially her 14 nieces and nephews, whom she entertained at parties, took on special trips, and welcomed into her home for extended stays. Every year, she was the gracious hostess of a traditional family Christmas Eve party in the longtime family home in Ladue. Miss Schlafly impressed everyone throughout her life as a vivacious, strong-minded, intelligent, witty, articulate, charitable, proper, ardently Catholic lady. She had both a regal manner and a contagious laugh. She is survived by 12 nieces and nephews: Daniel Schlafly, Jr. of Clayton, Ellen Shafer of New York, NY, Thomas Schlafly of St. Louis, John Schlafly of Alton, IL, Nancy Luke of Hoosick Falls, NY, Robert Schlafly of Glendale, Dr. Bruce Schlafly of Des Peres, Roger Schlafly of Santa Cruz, CA, Liza Forshaw of Ladue, David Schlafly of Ladue, Andrew Schlafly of Far Hills, NJ, and Anne Cori of Ladue, as well as numerous cousins, great-nieces, great-nephews, great-great nieces and great-great nephews. The family of Eleanor Schlafly wishes to thank the sisters and staff at Mother of Good Counsel Home for their dedicated care in her final years. Services: A funeral Mass will take place on Friday, November 9 at 10:00 a.m. at Annunziata Church, 9305 Clayton Road, St. Louis, MO 63124. In lieu of flowers, donations would be appreciated to Mother of Good Counsel Home, 6825 Natural Bridge, St. Louis, MO 63121; or the Carmelite Monastery, 9150 Clayton Road, St. Louis, MO 63124. Kriegshauser Brothers
To plant trees in memory, please visit our Sympathy Store.
Published by St. Louis Post-Dispatch on Nov. 4, 2018.
MEMORIAL EVENTS
No memorial events are currently scheduled.
To offer your sympathy during this difficult time, you can now have memorial trees planted in a National Forest in memory of your loved one.
GUEST BOOK
0 Entries
Be the first to post a memory or condolences.