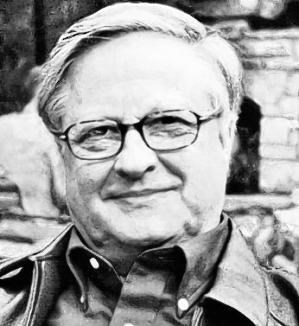 Guyton, Fred F. Jr. Fred Fleming Guyton, Jr. passed away peacefully on September 28, 2018 after a 7- month battle with cancer. Born February 2, 1938 in Memphis, TN, Fred is survived by his wife Beverly (Estes), his children Annie Dee Seal (Robert), Elisa Jane Roth (William), Josephine Rose Kendrick (Russ), Frank Gardner Guyton (Nikki), Daniel Thomas Guyton, Kelly Elizabeth Guyton and David Fleming Guyton; 10 grandchildren, Katherine, Elizabeth, Josephine, Jack, Lauryn, Mason, Olivia, Avery, Ben and Henry. Son of the late Fred F. Guyton, Sr. and Josephine Rose (Bryant) and brother to the late Jane Cooper. Fred received a Bachelor of Architecture from the University of Illinois College of Fine & Applied Arts in 1961. Upon graduation, Fred received a special Fellowship from the Center of Inter American Housing and Planning and spent one year as one of the first Peace Corps volunteers in Bogota, Columbia before his induction into the U. S. Army. As an officer, with a combat Engineer Battalion, Fred served as a helicopter pilot for three years. After discharge from the Army, Fred moved to St. Louis, Missouri where he began his career as an architect. On October 1, 1967 he and Bill Peckham began a planning and architectural practice that is now known as Peckham Guyton Albers & Viets, Inc. (PGAV). In 1975, Fred became Chairman of PGAV, a position that he held until January of 2010. Fred continued to work at the firm until his death. Under Fred's leadership PGAV earned many regional and national awards for outstanding architectural, zoological, and entertainment design and in many ways changed how thoughtful architecture enhances the destination experience. PGAV continues today as a world-class architecture firm with projects expanding the globe. During Fred's 35 years as Chairman of PGAV, he led the development of a remarkable number of landmark projects in North America, Europe, South America, and Asia. Among these are: - Busch Gardens Williamsburg & Tampa - Williamsburg, VA, Tampa, FL - Anheuser-Bush World Headquarters - Saint Louis, MO - Multiple projects at SeaWorld Adventure Parks - San Diego, San Antonio, Orlando - Big Cat Country, Fragile Forest and Penguin Puffin Coast, Saint Louis Zoo - Saint Louis, MO - Monsanto World Headquarters Renovation - Saint Louis, MO - Universal Studios Theme Parks - The Georgia Aquarium - Atlanta, GA - Discovery Cove - Orlando, FL - Port Aventura - Salou, Spain - Space Command Headquarters, Peterson AFB - Colorado Springs, CO Fred was licensed to practice architecture in 35 states and a member of the National Council of Architectural Registration Boards, the American Institute of Architects and the Missouri Council of Registered Architects. Fred was active in civic works and provided leadership and fundraising with many organizations including past-Chairman of the University of Illinois Foundation board and Life Director, Trustee for the St. Louis Science Center, past-President and Board member of the Cystic Fibrosis Foundation, Director of St. Louis Mercantile Bank, and Director of the Forum for Contemporary Art. Fred was proud to be a St. Louisan and was appointed by a succession of St. Louis Mayors to a number of posts. Including Chairman of the St. Louis Beautification Commission, Chairman of the Building Code Review Commission, and member of the Forest Park Advisory Board. Fred was an amateur historian, photographer, and classic car hobbyist and on the Board of Directors of the Classic Car Club of America, Classic Car Club Museum and the CCCA Spirit of St. Louis Region. He presented numerous cars at car shows around the country, including the Easter Concurs D'Elegance at Forest Park and Concurs D'Elegance at Pebble Beach, CA. Fred was also a member of the International Brotherhood of Magicians since 1956. Fred was warm, gracious, and had a wonderful sense of humor. He was beloved by his family and friends and will be missed by all. Services: The funeral service will be conducted at First Congregational Church of St. Louis, 6501 Wydown, on Wednesday, October 3 at 10:30 a.m. Interment Bellerive Cemetery. The family will receive friends at The Lupton Chapel, 7233 Delmar, on Tuesday, from 4 p.m. until 8 p.m. In lieu of flowers, contributions may be made to the St. Louis Zoo or the Classic Car Club Museum at Hickory Corners, MI. A SERVICE OF THE LUPTON CHAPEL

To plant trees in memory, please visit our Sympathy Store.
Published by St. Louis Post-Dispatch from Sep. 30 to Oct. 1, 2018.
MEMORIAL EVENTS
No memorial events are currently scheduled.
To offer your sympathy during this difficult time, you can now have memorial trees planted in a National Forest in memory of your loved one.
Funeral services provided by:
Lupton Chapel - St. Louis
GUEST BOOK
22 Entries
Fred was the warmest, most generous person I have ever known. He made the world a more beautiful place and I am honored to have known him. I am so saddened by his loss. My condolences to his family.
Philip Alderman
Friend
January 16, 2019
I met Fred when I worked at PGAV in the 70's and was that a fun/exciting place to be then. Fred came up to Chicago occasionaly and charmed us with his storytelling and great camaderie. Our condolences to his family.
Sherry Carroll-Denise
October 29, 2018
To the whole big extended Guyton family, wishing you peace as you deal with the very sad loss of Fred. He was such a fun-loving person and his smile and laugh made anyone's spirits lift. He will be very missed.
Jeanne Philips-Roth
October 4, 2018
Fred is already reconfiguring Heaven to a more Star Friendly experience..Count on it!
Can't wait to see what his spiritual genius may create without limitation..God Bleass Fred Guyton and his wonderful Joy in this World. To the Guyton Clan..how lucky are you to have shared this World with such a Spirit? Prayers..
Joe Finn
October 4, 2018
Annie and Bob
I am very sorry for your loss.
Rick Yackey
October 3, 2018
Annie, Bob and family - so very sorry for your loss.
Tom Abraham
October 2, 2018
We are saddened to learn of the passing of Fred, but grateful for his service to our nation with the Peace Corps in Colombia.

Our Condolences,
The National Peace Corps Association
October 2, 2018
Fred had a love for life, a love for people and a love for great cars. He was down to earth and sincere, willing to talk to and help anyone who asked. A huge void will be left in many civic and collector car organizations with his passing.
Duane Wesche, Pierce Arrow Society, CCCA
October 1, 2018
To the family, I'm so sorry for the loss of your love one, may the loving support of your family, friends and prayers sustain you through this very difficult time. Isaiah 57:15
October 1, 2018
Our condolences to the Guyton family. May your memories and happy times with your Dad/Fred help you through this time.
Irwin and Sue Anne Darack
Irwin & Sue Anne Darack
October 1, 2018 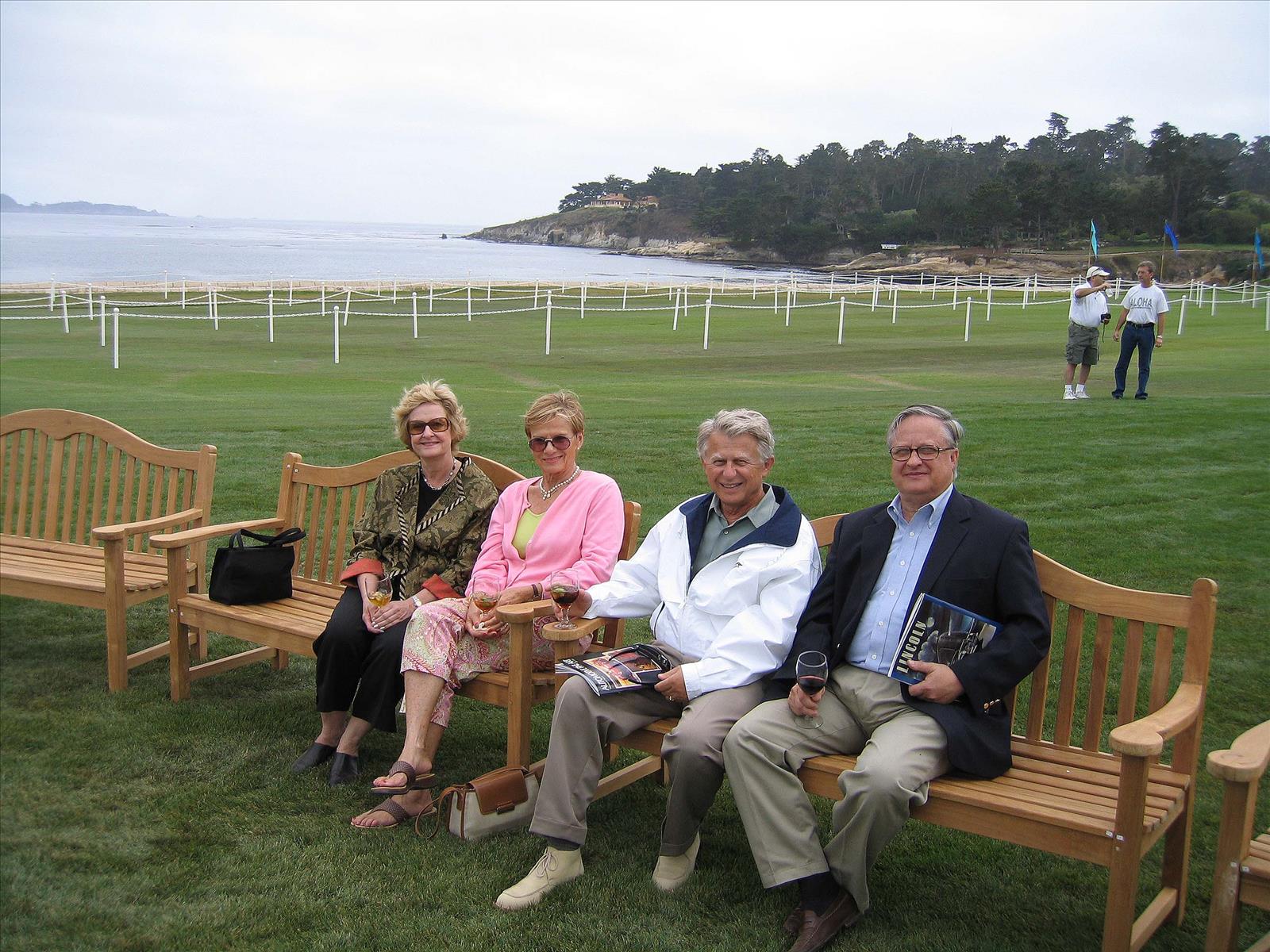 Fred and I were friends for more than 50 years. As undergrads at the U of I and members of the fencing team we were a constant source of mischief and pranks. We shared a love of classic cars, books, art and life in general. In later years Fred involved me in the Univ of Illinois foundation and we spent great times visiting each other, with me and my wife in California and in St Louis at the Westmoreland house. Fred loved life and all who knew him loved Fred.

We send his family our deepest condolences on their loss.
Abbey/Gabriela Silverstone
October 1, 2018
Fred was a kind and unassuming gentleman who gave of himself in so many, many ways. Humble, caring, funny, raconteur......these are but a few words to describe this incredible man. He was a gift from God that we all wish could have remained with us a little longer.
John Lowell
October 1, 2018
With a deep feeling of emptiness, I send my condolences to his family and my sincere gratitude for Fred having entered my life in 1961. We met at Fort Belvoir, VA, where we both were in training at the Basic Engineer Officer Course. Fred, knowing that he was at least two years away from entering the practice of architecture, already had a beautifully prepared folio, ready to apply for his first job. After our time in the army, time passed with him in St. Louis and me in Alabama. Life changed, and I moved from Alabama where I had my own architectural practice and joined PGAV in 1983. He made me the manager of the St. Louis office, but destiny took me to Chicago after three years. Fred and I remained friends, along with our mutual friend, Mike Kearney from our days at Ft. Belvoir. My short time with PGAV was one of the happiest periods of my life, and Fred gets the credit for trusting so much in me with the day-to-day operation of the firm. I will always remember the man who knew so much and shared so much with his fellow men and women.
Gaines Hall
October 1, 2018
It was a pleasure to be in the company of Fred. He loved life and the people in it. Thank you for allowing me to sample a small portion of your extraordinary life. Dave Stephens---HCCM, CCCA, Pierce-Arrow Society, St. Louis Theatre Organ Society.
Dave Stephens
October 1, 2018
I meet Fred at a retirement party for his wife Beverly Estes.He was truly and amazing guy he will be truly be missed by everyone who's life he has touched in this world so farewell for now Fred until we meet again in heaven.
David Minor
October 1, 2018
Fred was an outstanding man with a heart of sincerity for people -- in particular, those who held a common interest with him. He made life deeper and more enjoyable for countless people. God bless his loved ones at this time of loss.
Dr. Gerald Perschbacher
October 1, 2018
I learned so much from Fred Guyton, not just about architecture and business, but about life. My sincere condolences to his family and friends.
Laurie Sperling
October 1, 2018
I have wonderful memories of Fred: with my husband of 40 years, Ed Sweetnam, and George Albers I traveled to Dallas to open a PGAV office and extend PGAV's Architectural sphere. Fred and the firm he built had heart--that is becoming very rare in our profession today.
Cynthia Faw
September 30, 2018 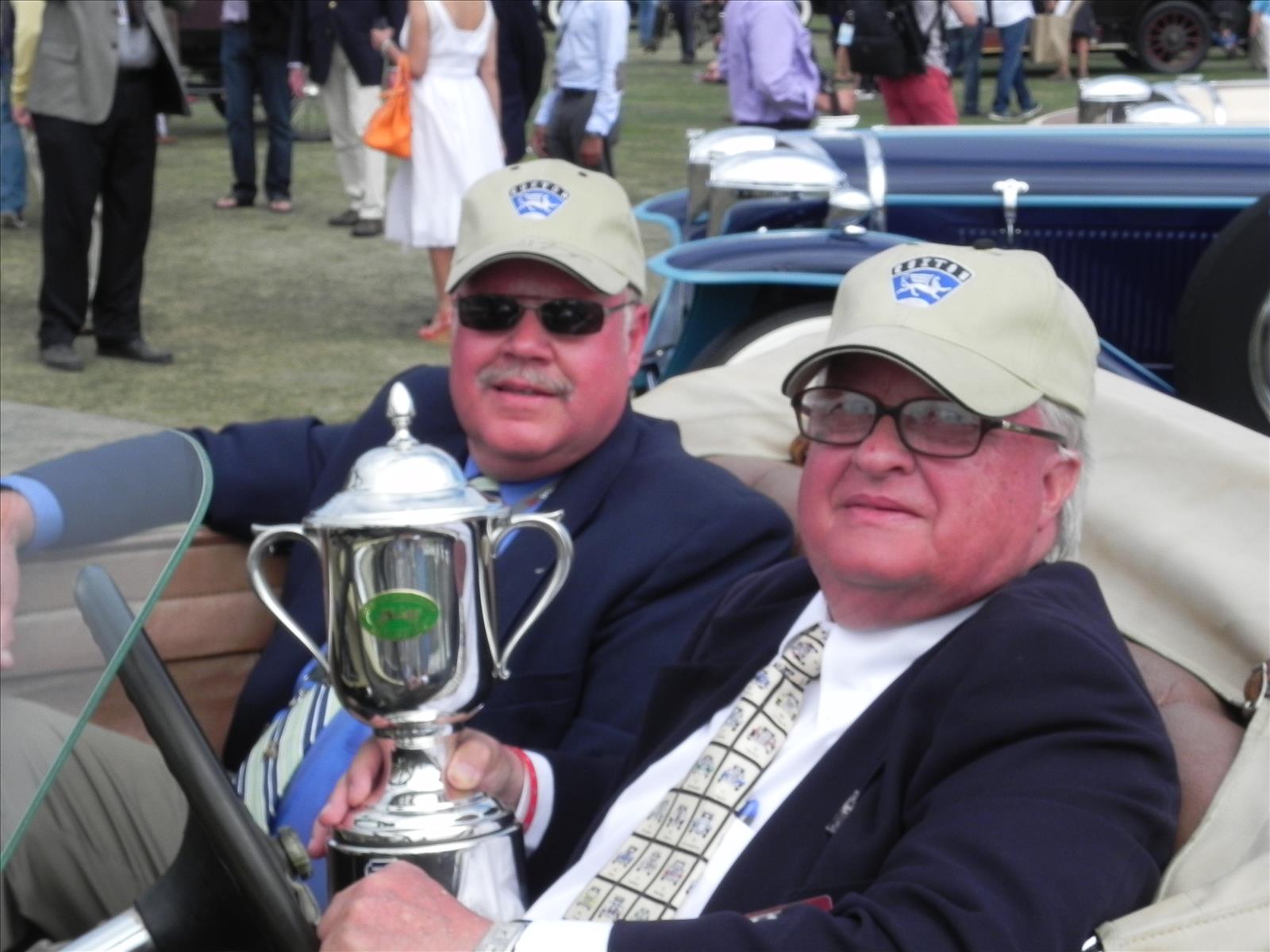 Jeff Buckley
September 30, 2018
I only met Fred when I started to work for PGAV back in 2012 but I still was able to hear many great stories from him. I had the pleasure of helping him box up some of his stuff up for a few weeks last year at PGAV. During that short time Fred told me some great stories about his time at PGAV. I will miss those stories, his laugh, and the way only he could tell them.
John Wilmas
September 30, 2018
Dear dear friend: You made my world so much greater. Laughter, interesting talks, parties at your garages, a few beers and Cardinals games. Miss you isn't a big enough word. Mike & Jo Kearney
Mike Kearney
September 30, 2018 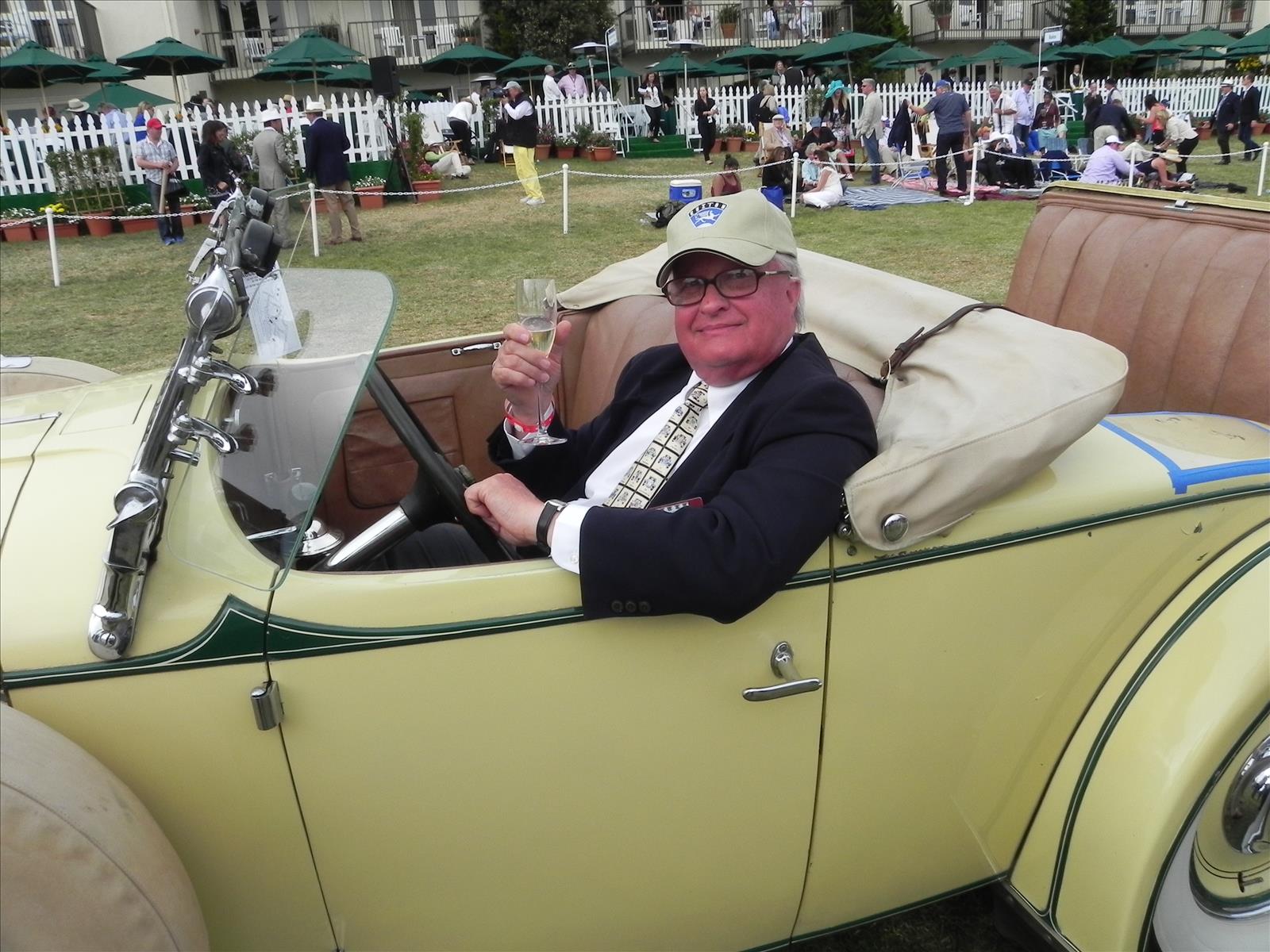 What a great guy and gentle soul. He was always willing to help you out and interested in what you had to say. As a retired A-B employee we shared many stories together. A car collector that had a great eye on the classics Fred was a delight to be around with. As a fellow member of the Moon Car Club he opened up his place for our meets when we sere in St. Louis. He will be missed by many.
Jeff Buckley
September 30, 2018