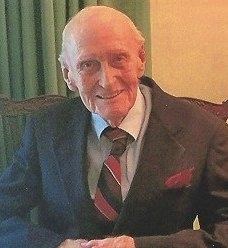 Dr. James T. Chamness died February 25, 2021 at his residence in St. Louis, MO. Born in Carlinville, Illinois he was admitted to Princeton without the necessity of entrance exams, having been considered well prepared scholastically. He became editor of the "Bric a Broc" year book - joined Elm Club and served on the junior prom committee. After 3 years at Princeton he was given early admission to the University of Pennsylvania - the oldest and first medical school in America and in the western hemisphere. After graduating from Medical School, Princeton bestowed on him a Princeton degree.

He served in the U.S. Army as Chief of Surgery at the American Hospital of Paris giving him the opportunity of making acquaintance with leading French Surgeons. Returning to civilian life in St. Louis he took further training to become board certified in Plastic and Reconstructive surgery. He retired at age 60 - with the strong conviction nobody should be subjected to an "old" Surgeon.

He enjoyed his remaining years at his homes in Florida and North Michigan and occasional various resorts elsewhere. He was fortunate enough to have traveled extensively to most places in the world and made many friends abroad.

To plant trees in memory, please visit our Sympathy Store.
Published by St. Louis Post-Dispatch on Mar. 7, 2021.
MEMORIAL EVENTS
No memorial events are currently scheduled.
To offer your sympathy during this difficult time, you can now have memorial trees planted in a National Forest in memory of your loved one.
Funeral services provided by:
Lupton Chapel - St. Louis
GUEST BOOK
1 Entry
My parents Dr. Jim and Kay Murphy were good friends of Dr. Chamness and thought very highly of him. My Great Aunt Margaret Murphy was his High school principal and teacher at Carlinville High School. Having lost her father tragically at age 8 yrs old, her Mother valued education and instilled that quality into Margaret. Small world! So sorry for your loss and God bless. Maripat
Maripat Monterubio & Dr. Fred Monterubio
March 14, 2021