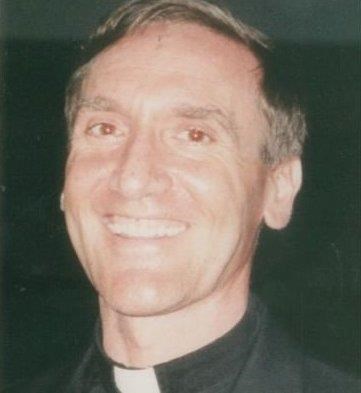 on May 13, 2020 from Covid-19 and underlying infirmities, fortified with the Sacrament of Anointing of the Sick. Beloved son of the late James T. and Virginia M. (nee Belgeri) Edwards; dearest brother and brother-in-law of Jeanne and Michael Hevesy; dear nephew, cousin, special friend of Gracemarie and Jim Miller, Mary and Howard Matthews and the "Prayer Group" who have supported each other and prayed together for 35 years, confessor, spiritual advisor and described by many friends as a holy priest. Born on August 15, 1950, Fr. Edwards was ordained on May 22, 1976 and served as associate pastor at St. Charles Borromeo, St. George, St. Clement of Rome and St. Ann parishes. He served as a pastor at St. Ann and St. Elizabeth of Hungary parishes until autumn 2008 when he became ill. He was diagnosed with Hodgkin's Lymphoma and Paraneoplastic Cerebellar Degeneration, the cancer-related cause of the balance, speech and fine motor skills deterioration, afflictions he bore gracefully. In April 2010, Fr. Edwards moved to Regina Cleri, the retirement home for priests. He began saying Sunday Mass at St. Justin Martyr parish chapel where the congregation ran from 5 to 25 people. He said Mass for the Daughters of St. Paul every Wednesday morning and after a few years began saying weekly Mass at St. Joseph Apartments and Mary Queen and Mother Center. He served as spiritual director to the Office of Apostolic Services. Fr. Edwards loved to sing and include music in his liturgies. In high school he began performing in the annual Catholic Youth Apostolate musicals, continuing until a few years ago. Almost no one in the crowd at a St. E's September Fest recognized him impersonating Elvis. For the last few years, he enjoyed singing with the St. Joseph Apartments Songbirds. Fr. Edwards, a Jeopardy fan, was always welcomed on Trivia teams since he seldom forgot anything he had learned and was a Cardinals fan who knew the team's history. Thanks to SSM Health St. Mary's ICU doctors and nurses for their care and accessibility.

Services: Private burial at Resurrection Cemetery with Mass and a Celebration of Life at a later date. Memorial donations to the Daughters of St. Paul, 9804 Watson Rd., (63126) or a charity of one's choice. A SERVICE OF KUTIS AFFTON CHAPEL, 10151 Gravois.

To plant trees in memory, please visit our Sympathy Store.
Published by Post - Dispatch on May 17, 2020.
MEMORIAL EVENTS
No memorial events are currently scheduled.
To offer your sympathy during this difficult time, you can now have memorial trees planted in a National Forest in memory of your loved one.
Funeral services provided by:
Kutis Funeral Home, Inc, Affton Chapel
GUEST BOOK
9 Entries
I sometimes couldn't hear parts of the homilies from the back of St. E's. This had never been a concern before (water under the bridge), but when he spoke I needed to hear it. I arranged to record and post on line each homily which, I believe more than just me, was of benefit to those hospitalized, home bound or otherwise infirm, and which Father Edwards humbly allowed as a benefit to others. Now, I can no longer find "Hear the Homily" on the St. E. web site. I wish all Fr. Edwards' homilies had been compiled as a resource. He was worth listening to.
CHARLES
Friend
July 5, 2020
Father Edwards was the source of miracles for my family and me. My husband was brought into the Church because of the example and preaching of Father Edwards. Father Edwards performed our marriage. He was my regular confessor. I was honored to serve on St. Elizabeth of Hungary's parish council when he was the pastor there. I saw him exhibit both Christian charity and steady leadership in his role as pastor. He truly listened and valued our input but he never used us to shirk or hide his responsibility.
Mary Ann Harter
May 22, 2020
We really enjoyed everything you did at the lake every Labor Day weekend. You will be missed.
Amy
Acquaintance
May 20, 2020
Father Edwards is what I would call a holy priest. His vows meant everything to him. I won't forget seeing him in plays and being on the same trivia team.
Jack and Kathy Cody
Friend
May 18, 2020
Fr. Edwards was a wonderful and dedicated priests. His knowledge and apparent photographic memory always amazed me. One time I recall him giving a sing homily with rhyming lyrics all without notes. Say some prayers for us, Father!!!
Jim DeNatale
Coworker
May 18, 2020
He was a fantastic priest. He loved to write liturgical music for children! He was great at it. He always had a smile on his face. My faith is stronger because of Fr. Edwards.
Ann
Friend
May 18, 2020
Father Edwards was a very prayerful priest, who loved to support people and say just the right thing when a person was troubled or unsure. No doubt, he converted many people with his kind ways.
Millie Kimmick
Friend
May 17, 2020
Fr. Jim was a good priest, and I'm sorry to hear of his passing. He appears to have borne his sufferings with prayer, dignity, and grace. May his soul rest in peace.
Brian Notzon
Acquaintance
May 17, 2020
He radiated Gods love. A great privilege to know him.
Bill Otto
Friend
May 17, 2020