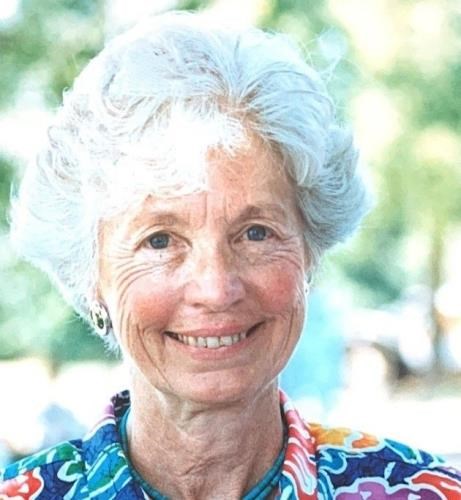 Passed away on Saturday, May 9, 2020 from complications of Covid-19. A lifelong resident of the St. Louis area, in 1943 she graduated from Kirkwood High School and then went on to earn a bachelor's degree from the University of North Carolina at Chapel Hill in 1947. Following her graduation in 1947, Joan became an advertising copywriter and publicist in the retail sector and wrote about everything from home appliances to shoe wear. Later, in 1962, she married the love of her life Jean Goodson, and together they built a small but perfect mid-century house, designed by local architect Ted Berger, with a modest cornfield and giant vegetable garden set on 40+ acres off Des Peres Road. For the next four decades until Jean's death in 2003, this home on Goodson Road enjoyed scores of elegant dinner parties, garden parties, and two weddings, as well as enthusiastic visits from children who fished in the pond, and communed with cats, dogs, horses, and a Mexican burro named Whirlaway.

Jean Goodson was president of the International Hat Company and often travelled abroad to shop for straw and ribbon. Joan often accompanied him on these trips, and together they visited China twice in the mid 1970s, shortly after Nixon restored diplomatic relations with the country. Over the years, Joan travelled frequently with Jean to places like Mexico, Ecuador, and India. She also went on a memorable trip to Germany organized by the Saint Louis Art Museum to visit studios of several contemporary German artists.

Joan's pride and dedication to our city, along with her passion for its cultural institutions, led her to actively support the Saint Louis Art Museum, Symphony, Repertory Theatre, Opera Theatre, Frank Lloyd Wright House, Landmarks Association, and Missouri Botanical Garden. She was also honored to serve as a founding Board Member and support the Contemporary Art Museum St. Louis.

Joan's dedication to friends, beauty, and nature was reflected in everything she did. And she was optimistic, smart, and funny with a frank curiosity that never failed to surprise and delight.

Services will be set for a later date. If desired, memorial contributions can be made to the Contemporary Art Museum St. Louis, 3750 Washington Blvd., St. Louis, MO, 63108, camstl.org, or a charity of choice.

To plant trees in memory, please visit our Sympathy Store.
Published by Post - Dispatch on May 24, 2020.
MEMORIAL EVENTS
No memorial events are currently scheduled.
To offer your sympathy during this difficult time, you can now have memorial trees planted in a National Forest in memory of your loved one.
Funeral services provided by:
Lupton Chapel - St. Louis
GUEST BOOK
0 Entries
Be the first to post a memory or condolences.