Eash, Lester E. age 95, on Wednesday, April 16, 2014; preceded in death by his beloved wife of 57 years Daisy A. Eash, loving father of Susan (Roger) Stewart, Sally (Kent) McMillen, John (Marie) Eash, grandfather of 7, great-grandfather of 11, uncle, great-uncle, cousin and friend to all he met. Born in 1919 in Jet, OK, Les moved to Goshen, IN at age 4. It was during that time working on his father's farm that he saw the Akron dirigible and became fascinated with aviation. After high school, he moved to Wichita, KS to live with his brother and attend Friends University. While in school, he worked for Stearman Aircraft (now Boeing) and Coleman Stove as a draftsman. After leaving school, he worked for several companies and eventually moved to St. Louis to work for Curtiss-Wright when he met Daisy. After marriage and closure of Curtiss-Wright, he and Daisy spent a short time in Toledo, OH working for WillysOverland and then returned to St. Louis for a job opportunity at McDonnell Aircraft Co. in 1945. Les worked on various aircraft programs at McDonnell Aircraft including the Banshee, Voodoo, and Phantom. One of his most memorable assignments was the designer and operator of the trapeze mechanism for the XF-85 Goblin parasite strike fighter that was designed to be carried in the bomb bay of a B-29 bomber. His last assignment at then McDonnell Douglas was Project Engineer for the DC-10 wing subsystems. This assignment led to a transfer to the Douglas Co. location in Long Beach, CA in 1976. After retirement from McDonnell Douglas in 1978, he went to work for Parker Hannifan as a Program Manager and then fully retired in 1980. While in California, he received a patent for the Champopper, a device used to open and retain the cork from a champaign bottle. He and Daisy returned to St. Louis in 1987 to enjoy time with family and friends. Les enjoyed singing in his church choirs and barbershop choruses, bowling, golf, Dixieland jazz music, returning to Indiana for High School Reunions, leading volunteer groups and spending time with family and friends. Let his faith, friendship and rolling with the punches philosophy be an inspiration for us all. Services: Please join the family in celebrating Lester's life by attending a memorial service at St. John's United Church of Christ in St. Charles, MO on Friday, 9 May at 7:00 p.m. Lester donated his remains to the Washington University School of Medicine. In lieu of flowers, donations may be made to St. Johns United Church of Christ Music Program in his memory.
Published by St. Louis Post-Dispatch on Apr. 22, 2014.
To plant trees in memory, please visit the Sympathy Store.
MEMORIAL EVENTS
To offer your sympathy during this difficult time, you can now have memorial trees planted in a National Forest in memory of your loved one.
MAKE A DONATION
MEMORIES & CONDOLENCES
10 Entries
Les was an outstanding mentor for our son, Corey, as he went through confirmation at St. John UCC. What an exceptional example he set. Corey was lucky to have his guidance and friendship.
Kristin Whiteside
May 9, 2014
So many wonderful memories of your dad at Grace Church, Woerner School, Cub Scouts and of course "The Holidays of Holly Hills" production. Les was a hard worker, a gentleman and a good friend. Our thoughts and prayers are with your family.
Cal and Joan Yeckel
April 27, 2014
As a young couple, my husband and I purchased our first home on Christy Dr from Daisy and Lester in 1976. We knew the minute we walked through the home that this was the house for us. It was nice to meet Daisy and Lester on our second visit to the home. Several times over the years we lived there we would catch Lester driving by to look at the house and we sensed how much he loved the home. We would always invite him in to take a look at the home where he had spent so much time raising his family. We moved after living there 22 years and I too have to go back to take a look at the old Eash / Beermann home on Christy Dr.
It seems that Lester had a wonderfully happy and blessed life.
Carol & Phil Beermann
April 22, 2014
Les it was a pleasure knowing and working with you. We had a lot of good times working and in retirement at your dinners in Miss Sheries' Cafe. We will miss you smiling face.
Paul Adams
April 22, 2014
Les and his son John were our honored guests last summer, as we celebrated the 65th anniversary of the XF-85 Goblin maiden flight. It was a genuine pleasure to hear Les talk about his experiences working on the project. Our heartfelt condolences go out to John and the Eash family.

Dan O'Hara
Missouri Aviation Historical Society
April 22, 2014
Sue, your Father was aa joy to be around. We met him thru the Sages He always had a smile. I remember meeting him at a Billy G. crusade. He will be missed. Jack & Rosalee Buehne COTM
April 22, 2014
John,
My wife and I extend our heartfelt sympathy to you and your family on the lost of your father. I can't help but recall the years working for your Dad and all he did in helping my career at McDonnell. My time on the DC10 program working for him has been embedded deeply in my memory as the best years working at McDonnell. Your Dad was a joy working for and so was the social time I had the pleasure of spending with him. Your Dad was one of a kind, a hard working, fun loving guy that was admired by all he came in contact with in his life. Everyone will miss him.
In this time of grief, may the glow of God's love light your way, and may the warmth of His embrace give you peace and comfort.
Jim Greco
April 22, 2014
I knew Les in 1952 when he was a group leader in design and I was in the strength department working together on the F3H Demon. I always liked working with him and our time together. Was glad to see him at the XF-85 Goblin Air Museum Recognition Dinner.
Jack E. Down
April 22, 2014 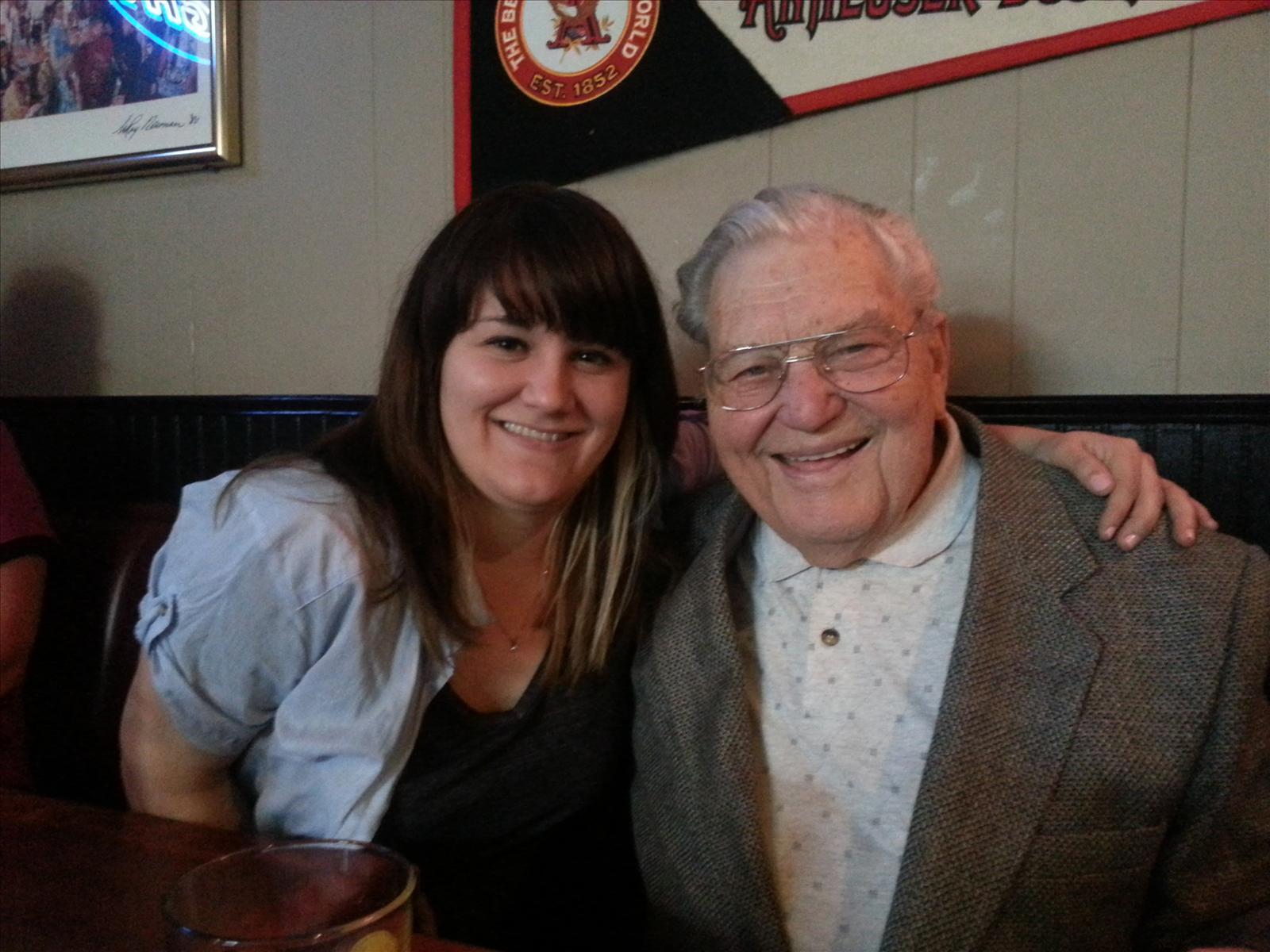 Grandpa, I will cherish all of the lovely memories I have of you for the rest of my life. I know Grandma Daisy is taking good care of you in Heaven like she always did. Thank you for raising your kids to be amazing parents to us all. I love you and miss you so much!
Christy Eash
April 22, 2014
Les was a good friend to my parents, a good husband to Daisy, a good father, grandfather and great-grandfather, and a good influence to his children's friends including me. I am fortunate to have known the Eash family, Les will be missed but will always be remembered.
Mike Curran
April 22, 2014
Showing 1 - 10 of 10 results