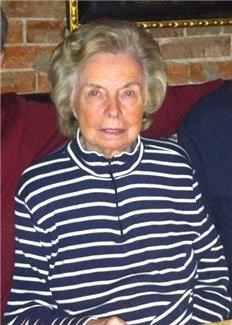 Abernathy, Marjorie Ellen Chapman
96,of St. Louis, Missouri, departed this life on Tuesday, February 7, 2017.
She passed away peacefully at her home with family at her side. Born the 6th day of February, 1921, to Sylvia and William Hall Estle of Conesville, Iowa, "Marge" was raised with her siblings on her family's modest farm. Her early life was painted by the brush of Depression-era agrarian living and the gumption bred in spades by the family-centric peoples of the upper midwest. A gifted storyteller, Marge often shared memories of a home lacking in the luxury of electricity or plumbing, that was however full of love and the determination to succeed. She earned a lifelong aversion to tomatoes due to hours spent picking them by the bushel and selling them door-to-door in the city for 10 cents a pound. She fondly spoke of receiving her first store-bought dress when she was in high school. Her father's family had always placed a high value on education, and so upon completing high school, Marge entered the University of Iowa. It was while there that she met William Austin Chapman.
Bill Chapman was studying accounting when he, as she would later recall, "pursued me for about a year and a half before I'd go steady with him." The two were married in 1940 as Bill began his career with Arthur Andersen in Chicago. He was offered the opportunity to transfer to a new office for the firm in St. Louis, Missouri, and the young couple began the next chapter in their lives in the suburb of Ferguson. Marge gave birth to three children, Janis (Jan), Robert (Bob), and Virginia (Ginny), and dedicated her time to raising her children. She later decided to obtain a degree in education at Harris-Stowe Teachers College in St. Louis. She worked as a substitute teacher in the Ferguson School district. They became active members of Pilgrim Congregational Church in St. Louis. Bill Chapman, meanwhile, had been offered an opportunity that would change the course of his career, and ultimately the legacy of the Chapman family. A small, family-owned manufacturing firm called Barry-Wehmiller, asked him to join their company. Chapman took the risk, accepted the offer, and left Arthur Andersen to join the company he would eventually purchase from the Wehmiller family. Despite the struggles of Barry-Wehmiller Bill faced for several decades, Marge focused on family, volunteering, and occasional joined him on business trips.
They moved to Chesterfield, Missouri in the mid 1960's where she spent countless hours in the garden and manicuring the lawn that would perfectly frame myriad family memories in the coming decades. Bill Chapman passed away from a heart attack in 1975, leaving control of the company to his son, Bob, who has since built the company, through more than 80 acquisitions, into a 2.5 billion dollar company headquartered in Clayton. In the years following her husband's death, she became a passionate collector of folk art, a spirited traveler, a part-time resident of her beloved New York City, and a dedicated and devoted grandmother. She volunteered for years at St. Luke's Hospital and spent time on the board at Deaconess Hospital, and, 25 years by the side of her son, Bob, on the board of Barry-Wehmiller. She found love again, marrying Thomas S. Abernathy, a close friend and fellow member of Pilgrim Congregational, in 1995. Tom proved a perfect compliment to Marge, and the two touched many with a generosity as heartfelt as it was legendary. The couple donated their time, experience, stories, laughter and tears to anyone willing to listen. Their touch and support has been felt by multiple generations inside and outside of their families. Spending time with them at one of their favorite restaurants - from I Fratellini in Clayton, to Sportsman's Park in Ladue - was an event rife with life lessons, family news, history, and of course a hefty serving of laughter. It was a practice they continued as a couple well into her 95th year, forging meaningful relationships with the restaurant staff members that inevitably fell in love with them over the years.
Marge, Grandma Chapman, GiGi. She was a special soul with the ability to engage with and listen to friends and family with a degree of empathy and understanding that wrapped around them like a blanket. She had boundless energy, a sharp wit, impeccable style, and a laugh that could change the course of a day . Beloved wife, mother, grandmother, great grandmother, friend, confidant, benefactor: she was all of these things and more.
Marge is survived by her husband and constant companion, Tom; her children, Janis Merrill, Bob and Cynthia Chapman, and Ginny and David Jontes; her sister, Emily Estle Townsley; and her loving grandchildren and great grandchildren. Her legacy is etched in a foundation built on family dedication, love, support, and the generosity she embodied, that is reflected and expressed by her growing family. A true matriarch, she once said she was most proud of her family and the stability, love and support she afforded her children, her grandchildren, and their children. She expressed immense gratitude for being "so lucky" to have lived long enough to watch them benefit from her generosity in meaningful ways. She will be dearly missed, a sentiment shared so eloquently by her husband, Tom in a poem he wrote in her honor:

Marges are made so sparingly
Not many are made, only a few
And are assigned so selectively
One was selected for you.

It seems to leave a vacuum
That we can quietly fill
With memories-Ah! Memories
That linger with us still.

Services: A private service will be held in September at the dedication of Chapman Plaza in Shaw Park in Clayton. This gift of the Chapman family will grace the corner of Brentwood and Forsyth and provide a beautiful and welcoming setting for gatherings and reflection. Chapman Plaza will be an enduring symbol, forever tying Marge's legacy of generosity to the St. Louis community that the Chapman family has called home for more than 70 years.
In lieu of flowers, a contribution to Our Community Listens, a 501(c)3 organization focused on strengthening communication skills and promoting deeper understanding between the people in our communities, can be forwarded to Barry-Wehmiller Cos., Inc., attention D. Osterholt, 8020 Forsyth Blvd.,
St. Louis, MO 63105.
A SERVICE
OF
THE LUPTON CHAPEL

I write to express my sympathy to the three of you for the death of your mother. She was a remarkable woman, who managed to navigate a number of eventful moments with strength and dignity. You were fortunate that she was with you for such an extended period.

And I was fortunate in knowing Marge, and having her share her love for her extended family.

p.s. I am using this impersonal forum because I do not have addresses for Janis and Ginny, and because my words are meant for each of you.
March 3, 2017
To the Family of Marge Estle Chapman -
I was very saddened to learn this past week of your Mom's recent passing. While it has been over 30 years since we shared a family bond, my remembrances of the times I got to spend with her... at Grandma's & Gramps' house in Letts, as well as during my stays at your folk's home in Chesterfield... are happy one's that I treasure and hold close. Although she wasn't exactly my Aunt, for a period of time I felt privileged to think of her as one. Taking me to Cardinals games, talking about the Hawkeyes, and giving me rides in the red convertible sports car are things I will never forget. I also recall the sail boat. Through the eyes of a young boy in the mid-to-late 60s & early 70s, Marge was fun, cheerful, cool, and pretty, which is how she forever lives in my memory. I will always be grateful for her kindness. With deepest sympathy...
Jeff Shellabarger
February 25, 2017
Tom - it is over 30 years since we worked together, however, I feel for you and your loss and wish you well. Your experience and counsel was welcome and appreciated. I hope your years with Marjorie were happy and fulfilling.
David Hanson
February 20, 2017
Tom I'm so sad to hear of Marjorie's passing. My thoughts and prayers to you and family.
Shelva Ludwig
February 17, 2017
Love you Mom!
Virginia Jontes
February 16, 2017
Our prayers and sympathy's are with Marge's family and her husband Tom Abernathy (my former boss at HBE)
Bob Preis
February 16, 2017
Peace, Mrs. C
Linda Roy
February 13, 2017
Here's to beautiful brick patio's, going back to school, Pepsi not Coke, packing up my college room, when I was in the hospital and putting up with the pesky kid from across the street.
Marge was a wonderful, strong woman, I'll never forget her
Linda Roy
February 13, 2017
Bob, Sorry to hear of the passing of your Mother. She was a great lady.
Bert Brady
February 13, 2017
To the Family and Friends of Ms. Majorie Ellen Chapman Abernathy.

The Harris-Stowe State University Family offers you our deepest sympathy in the loss of your loved one, Ms. Majorie Ellen Chapman Abernathy.

While we know that this is a difficult time and experience for you all, please find strength in the love and support that surrounds you.

Please accept this letter of condolence in acknowledgement of your loss, and be comforted in knowing that earth has no sorrow that heaven cannot heal. Our thoughts and prayers are with you!

The Harris-Stowe State University Family
Camille Brooks
February 13, 2017
I will miss you Mom! You were fun, full of life, and taught me everything I know! You will forever be in my heart and in my thoughts everyday! Love, Ginny
February 12, 2017