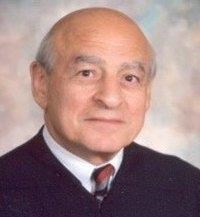 The Honorable Paul J. Simon passed away peacefully on Monday, June 6th, 2021, in his home surrounded by his children, grandchildren and great-grandchildren. He was born in St. Louis on July 10th, 1933 to Samuel and Sarah Simon (Webbe). He met the love of his life Mary Jane Meyer and they were married in 1955. They were happily married for 65 years.

He attended St. Vincent De Paul grade school, followed by St. Mary's High School. He earned his undergraduate degree from Washington University and his law degree from St. Louis University Night School. He proudly served as a Missouri State Representative, Deputy Coroner, Special Assistant Attorney General, as well as an Attorney in private practice. He became President of the St. Louis Board of Alderman serving one term from 1975 - 1979. Despite many supporters encouraging him to run for Mayor, he was nominated to serve on the Missouri Appellate Court, Eastern District. He served until his retirement in 2004 at the age of 70 and served for several years as the court's settlement judge. He was a member of St. Raymond Maronite Cathedral and St. Gabriel Church in St. Louis, served on the Board of the Gene Slay's Boys and Girls Club and many other charitable associations, including the Sisters of St. Paul.

Dad, we can't thank you enough for the man you were and the morals you instilled in all of us. You showed us so much love and never expected anything in return. You were the model of God's Grace and treated everything with fairness and kindness. You helped raise us to be responsible adults with unconditional love and lead by example. You were the strong shoulder to cry on and the father that listened. You allowed us to stumble but were always close enough to catch us. To say that we loved you would be an understatement - but to say that we will miss you would be a greater understatement. We Love you Dad.

Judge Paul J. Simon was preceded in death by his wife Mary Jane (Meyer), his son Paul Jr. (Janice), his father Samuel and mother Sarah Simon (Webbe) and his sister Theresa (McDermott). He is survived by his sons Sam (Laurie) and Jim (Ann) and his daughters Jayne Simon Vollmer and Joan (Chris) Saracino. Dad will also be fondly remembered by his numerous grandchildren and great-grandchildren.

In lieu of flowers, memorial donations in memory of Judge Paul J. Simon may be made to The Paul Simon Jr Foundation, 345 Marshall Avenue - Lower Level, Webster Groves MO 63119

To plant trees in memory, please visit our Sympathy Store.
Published by St. Louis Post-Dispatch on Jun. 10, 2021.
MEMORIAL EVENTS
Jun
11
Visitation
4:00p.m. - 8:00p.m.
Kutis Funeral Home, Inc, St. Louis City Chapel
2906 Gravois Avenue, St. Louis, MO 63118
Jun
12
Funeral service
10:00a.m.
St. Raymond Maronite Cathedral
931 Lebanon Drive, St Louis, Missouri 63118
Funeral services provided by:
Kutis Funeral Home, Inc, St. Louis City Chapel
MAKE A DONATION
MEMORIES & CONDOLENCES
12 Entries
During my service as chief assistant to both Mayors Cervantes and Poelker I have the pleasure and privilege to serve with Paul as both a State representative and as President of the St Louis Board of Alderman. I have the resolution I was given by the Board of Alderman with his signature when I left St, Louis to become City Manager of Portland Maine. It has been on the wall of my office for all these years...because I so respected him as a public servant. My sympathies to his family. There was no one more committed to public service than Paul,,,,,,,,,,may he rest in peace.
AJ Wilson
Work
June 18, 2021
Jane I am so sorry for your loss your family is in my prayers. So lucky to have him for so long. God bless you love Chris and Rich Chibnall
Christine Chibnall
Friend
June 11, 2021
Condolences to The Simon Family. Rest In Peace Your Honor.
Jim Kleinschmidt
June 11, 2021
Judge Simon was a true gentleman, kind, considerate, and caring. Although I did not know him well he always treated me and everyone else as a friend. I recall many years ago while I was walking downtown a voice called out behind me "Harvey" I turned and saw that it was Judge Simon. He recognized me from behind! He was a wonderful gentleman.
Harvey Friedman
Other
June 11, 2021
So many reasons to admire this man...not least among them are his gifts to be empathetic and encouraging. Love and our deepest condolences to the entire Simon family. Guy & Bob
Guy Slay
June 11, 2021
On behalf of St. Mary´s High School and its faculty, staff and students, both past and present, we extend our most heartfelt sympathy to the family of the Honorable Judge Paul J. Simon, an alumni of ours. Know too, that we share in your sorrow and grieve for your loss. Although gone from this life, the "Dragons" from St. Mary´s will forever keep our former classmate in our prayers. Danny Slay/ Member - Board of Directors St. Mary´s High School Alumni Association
St. Mary's High School
June 11, 2021
Paul Simon was a model gentleman. Ever since I first met him, I wanted to be like him. I was thrilled when Paul was appointed to the Court of Appeals. He belonged on the bench, because no person had more integrity nor a greater sense of justice. I especially appreciated Paul´s devotion to his Catholic Faith. I will always cherish the retreats we made at White House Retreat. May Paul join his beloved wife in the glory of heaven.
George Kerry
Friend
June 10, 2021
Paul was one of the finest men I have ever known. His life was one of complete honor and decency. It was often said that one could not say enough good things about him! No one better lived the gifts and the fruits of the Holy Spirit than Paul Simon.
Martie Aboussie
June 10, 2021
A Man For All Seasons
Jim O'Herin
Other
June 10, 2021
My deepest condolences to the whole Simon family on the loss of your father. My father, Jack Dunsford, thought the world of him, and we heard his name often in our family. Sincerely, Clare Dunsford
Clare Dunsford
June 10, 2021
My condolences to the Simon Family. Paul Simon always returned my calls for advice, guidance and help. His demeanor and respect for people earned his title, Most Honorable Person. Forever Grateful, Ron Auer
Ron Auer
June 10, 2021
I live away from St Louis and cannot pay respects in person. He was the perfection of a Jurist. Kind, tolerate, savvy, and smart. He solved people´s problems as if they were his own. I had the Honor to appear before him on many occasions. The first thing he asked about were my partners and he knew EVERYONE by name. May he rest in peace
Gary Sarachan
Work
June 10, 2021