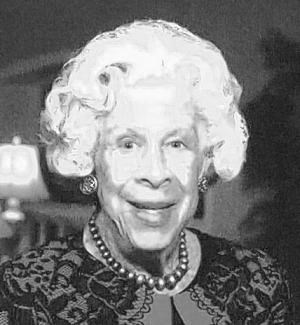 DIED
July 25, 2017
McDonnell, Priscilla Robb Priscilla Robb Pris McDonnell died peacefully on Tuesday the 25th of July, 2017 surrounded by family. She was less than two weeks shy of her 95th birthday. She is survived by her son William Randall Randy McDonnell (Veronica); daughter Robbin McDonnell MacVittie (Paul); grandson William Sanford MacVittie (Amanda) and great-grandson Paul Liam MacVittie. Priscilla was the widow of Sanford Noyes Sandy McDonnell, former Chairman and CEO of McDonnell Douglas. Priscilla was a founding member of Opera Theatre of Saint Louis and had tirelessly supported it since 1975. She was district chair of the St. Louis District of the Metropolitan Opera National Council, President of the Saint Louis Symphony Orchestra Volunteer Association and Community Music School. She had served in leadership positions on the boards of The Arts and Education Council, the Bach Society, the Community Music School, the Washington University Friends of Music, the Saint Louis Art Museum, The Sheldon, The National Society of Arts and Letters, Care and Counseling and The Wednesday Club. She served as a soloist at the Ladue Chapel for twenty-five years and sang her father's songs in a Carnegie Recital Hall Concert in NYC. Priscilla was Variety Club Woman of the Year in 1988 and received the Missouri Historical Society's Thomas Jefferson Award in 2004. She was a Globe Democrat Women of Achievement in 1973 and would also receive The Arts & Education Lifetime Achievement in the Arts award, the St. Louis Symphony's Green Room Award and the Cathedral Concert's Great Music Award. She would also receive an honorary degree from the University of Missouri at St. Louis. She never met anyone she didn't like and will be missed by so many. Services: A Memorial Service will be conducted in the Sanctuary of Ladue Chapel Presbyterian Church, 9450 Clayton Road, Ladue, on Saturday, August 5th at 10:30 a.m. A reception will follow the Service. In lieu of flowers, Memorials appreciated to CharacterPlus, the organization that her husband Sandy founded in 1988. The address is CharacterPlus, 1460 Craig Road, St. Louis, MO, 63146. A SERVICE OF THE LUPTON CHAPEL

To plant trees in memory, please visit our Sympathy Store.
Published by St. Louis Post-Dispatch from Jul. 30 to Aug. 3, 2017.
MEMORIAL EVENTS
No memorial events are currently scheduled.
To offer your sympathy during this difficult time, you can now have memorial trees planted in a National Forest in memory of your loved one.
Funeral services provided by:
Lupton Chapel - St. Louis
GUEST BOOK
18 Entries
I was privileged to meet Pris thanks to her dear Sandy - two people who walked the world in grace, modesty and compassion. Sending sincere condolences to the many who will miss her deeply.
Diane Greenspun
September 15, 2017
Randy and family,
My condolences on your mothers passing. I remember her as a very sweet lady who was always dressed perfectly and made the best hot cocoa!
May your memories of her comfort you in the coming days.
Sheri Loewenstein-Slawin
August 14, 2017
Teaching the "Shepherd Class" during church with Pris about 20 years ago at Ladue Chapel was such fun! I will always remember her kindness and patience as a teacher to the young children.
Anne Cross
August 6, 2017
I'm so sorry to just find out of your Mom's passing. I know she so was so well loved by everyone that she knew including myself and of course Mel. Our prayers are with you and your family. I am out of town or I would have been at the service.
Joni Loewenstein and family
Chesterfield, MO
Joni Loewenstein
August 4, 2017
Such an elegant lady. My condolences to Randy and the rest of the family.
Jack Abercrombie
August 4, 2017
Sending condolences, thoughts and prayers to the McDonnell family. May your special memories comfort you during this time.
Jacqui Poor
August 4, 2017
Lauren Kaplan
August 4, 2017
Miss Priscilla was a patient of ours. I always addressed her by name and that seemed to impress her that I knew her when she came in. Eye Care Assoc will miss her.
August 3, 2017
So very sorry for your loss. She was always cheerful, kind and pleasant. Her smile lit up,the room. Your family will be in my prayers.
Alan Brainerd
August 3, 2017
Pris was an elegant and vivacious woman who will be missed by everyone that had the pleasure of knowing her. My mom, Joan, and I will be out of town for the service but we will always have the fondest of memories of Pris.
Gary Wendt
August 1, 2017
Your mother was such a joy and a Godly woman of great example and reputation. I am sorry I will be out of town and unable to attend her memorial service.
Tim Finley
July 31, 2017
Sadly, from Terry Culver. My letter follows in mail.
July 30, 2017
Randy and family please know the Codasco Class of 70 sends our thoughts and prayers.
Wm J Tim Gillespie
July 30, 2017
Randy and family please know the Codasco Class of 70 sends our thoughts and prayers.
Wm J Tim Gillespie
July 30, 2017
Your mother was an incredible person. She made a huge impact on my life. Her zest for life and her commitment to family helped me through some tough times in my life. She is my rock star.
Tim Gillespie
July 29, 2017
What an amazingly gifted and generous woman your Mother was who left us with her legacy which is an inspiration to all. My love, thoughts and prayers are with you now and always. Katherine Allred
Katherine Allred
July 28, 2017
It was a great privilege to have known your gracious Mother. I wish I could be with you for the celebration of her life. I send you much Love and Light to you,Robin - Terry Coleman
July 28, 2017
A long and gifted life that should be celebrated! May your mother Rest In Peace with your dad Sanford now! They flew the world together with style! Bob Cook
Robert Cook
July 28, 2017