10/25/1938 – 02/21/2021. Thomas Joseph Lynch, 82, died Sunday, February 21, 2021 at Friendship Village of Sunset Hills, MO. Tom had been resting comfortably overnight and passed away fatigued of advanced cancer. He continued to show resilience while enjoying his family, connecting with friends, golf, tennis, watching sports & music instruments including the accordion. He was known to be genuinely the friendliest of humble men and generous with his time, stating "Every Day is a Blessing!"

Tom was born, October 25th, 1938 to Robert T. and Juliana (Franta) Lynch in Chicago, IL. He valued caddying at Medinah Country Club, affirming how it set the foundation for the rest of his life. Tom later earned his degree at Northwestern University on an Evans Scholarship and remained actively involved for many years as a Western Golf Assoc., WGA, Director. He was a disciplined business man who in 1972, along with Justin Williamson (brother in law), purchased Midwest Systems and River Roads Distributing from Earl M. Winkle (father in law), founded in 1942.

Services: A celebration of life will be scheduled once family and friends are able to travel safely. In lieu of flowers, memorial contributions may be made payable to Evans Scholars Foundation, 224-260-3763, 2501 Patriot Blvd., Glenview, IL 60026, or at:

To plant trees in memory, please visit our Sympathy Store.
Published by St. Louis Post-Dispatch on Mar. 2, 2021.
MEMORIAL EVENTS
No memorial events are currently scheduled.
To offer your sympathy during this difficult time, you can now have memorial trees planted in a National Forest in memory of your loved one.
GUEST BOOK
11 Entries
I'm so sadden by your loss and the passing of my friend. I remember the time that Tom sold me a Penn Mutual life insurance policy that I still have today and its' grown in value. I remember Tom and you at our class reunions and his sadness at not making our 60th. reunion. Our memories of Tom will last forever.
Robert Meale
March 23, 2021
Linda/Family, Tom took me under his wing in 2008 when I first met him in 2008 at the Bellerive ES Selection event there. We just happened to be sitting at the same table at the post-selection meal and I mentioned to him that I thought his questions for the candidates were insightful and substantive. That always stuck with me, and so did Tom (LOL!) when he found out I was a fellow ex-patriated NU ES alum! What a great, great man and his support of, and passion for, the ES program was second to none. I am so sorry for your loss.
Ken Jones
March 8, 2021
We met almost 64 years ago when we were freshmen at the Evans Scholars House at Northwestern University. It has been a lifetime friendship. I admired Tom for his dedication to promoting the Evans Scholarship, a life changing charity program. Tom led a life of good deeds and was a leader. It was a courageous fight the past couple of years, and a great job of putting your life in order. RIP my friend. You are missed.
Jack Townsend
March 7, 2021
The words everyone has expressed are so true...bigger than life itself, touched many lives, generous with his time to help others. Wherever he went he was engaged, full of energy and life, and genuinely interested in everyone. Thank you for sharing your memories and well wishes for our family.
Rick Lynch
March 5, 2021
I am saddened to hear of Tom´s passing. I met Tom at a Sunset Tennis Center clinic that we both regularly attended. He was always the perfect gentleman and a joy to be around. I am so sorry for your loss.
Kim Bohnenkamp
March 4, 2021
To the entire Lynch family the Wegmann family extends our deepest condolences. My siblings and I met Mr. Lynch when we caddied at Sunset Country Club. He was such a kind hearted man, such a joy to talk with, and truly cared about each and every one of the caddies there. May he Rest In Peace with the Lord in Heaven!
Adrianna Wegmann
Acquaintance
March 3, 2021
To Linda and the entire Lynch Family - Please accept our sincere condolences from the entire Evans Scholars family. Tom's impact on the Mizzou Evans Scholars was significant and the number of Scholars and caddies he helped over the years will not be forgotten. We will greatly miss Tom's sense of humor and his inimitable laugh. Thank you for all you did friend and Rest in Peace Tom!
Pat Reilly
March 2, 2021
I knew Tom through Evans Scholars. He was a wonderful gentlemen to converse with and a fun golf partner. May he rest in peace.
James Davies
March 2, 2021
Linda, We share your deep loss for the most loving and giving man we know. Tom was bigger than life itself, and he enjoyed and shared his time with all. He will always be remembered for his outgoing, jovial personality and his unending love for you, his friends and family, music, Sunset Hills, and last but not least GOLF. Tom touched many lives in his 82 years and has definitely made this world a better place. To the ultimate Looper, rest well my friend and always leave an opening in your eternal foursome for an old friend. With love and respect, Tom and Dawn Musich
Tom Musich
March 2, 2021
My thoughts and prayers are with you and your family
Anna Lopez
March 2, 2021 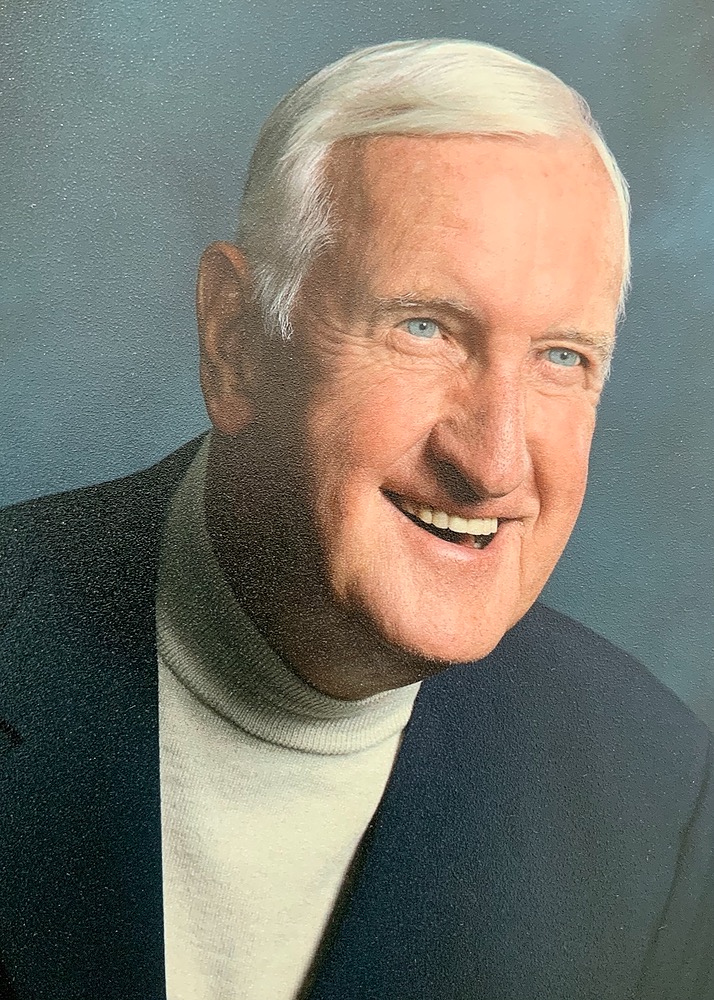 My father in law, Tom, was the most generous spirited man I´ve met. I´m proud of the son he raised to be the man I love & married. Tom will be missed but never forgotten.
Carrie Lynch
March 2, 2021