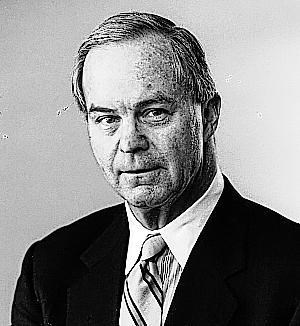 Bush, William H.T. Bucky a longtime resident of St. Louis, died Tuesday, February 27th at the age of 79 near his winter home in Hobe Sound, Fla. He was an accomplished businessman, a lover of music and sports, and a devoted father and grandfather. He was a true Point of Light, giving generously of his time and resources to many causes and institutions. He loved a good story. He loved a good song. He loved a St. Louis Cardinal victory. He loved his country and his church. But his family always came first, including his beloved wife of 57 years, Patricia Lee Redfearn, who preceded him in death on November 10, 2015; his children and grandchildren; and his very large extended family, all of who adored him.

He threw his heart and soul into the political campaigns including those of his brother, President George H. W. Bush and his nephews, President George W. Bush and Governor Jeb Bush. Born July 14, 1938, in Greenwich, Conn., the youngest son of Prescott and Dorothy Walker Bush, he graduated from the Hotchkiss School, in Lakeville, Conn., in 1956,and earned a B.A. from Yale University in 1960. He served in the United State Army as an engineer before joining the Hartford National Bank in Hartford Conn., where he eventually became Executive Vice President in charge of corporate and commercial banking. But it was St. Louis - the hometown of his mother and maternal grandfather, George Walker where he and Patty moved to raise their family and set down deep roots.

In 1978, Mr. Bush joined the Boatmen's National Bank of St. Louis as President and was member of the Board of its parent holding company, Boatmen's Bancshares, Inc. In 1986, Mr. Bush cofounded the financial advisory firm of Bush-O'Donnell & Co., which provided investment management and financial advisory services to corporations and individuals both in the United States and abroad. He remained the company's CEO until his death. He loved community banking and the opportunity to spend time working on people's personal, professional and non-profit passions. He was highly valued as a corporate board member serving as a director of Maritz Inc., Lord Abbott, Blue Cross Blue Shield of Missouri and Wellpoint amongst others. He also served on a large number of nonprofit and civic boards, including as chairman of the Board of Trustees of Saint Louis University from 1985 to 1992; chairman of the Missouri Botanical Gardens from 1991 to 1993; and president of the Municipal Opera Association from 2005 to 2006. He also served on the boards of the Repertory Theater of St. Louis, The St. Louis Zoo, the Arthritis Foundation, the St. Louis area Council Boy Scouts of Missouri and the St. Louis Symphony.

Despite his deep commitment to his work and his community, Mr. Bush always had time for fun. He was a wonderful entertainer and storyteller, and an accomplished guitar player and pianist. He remembered an endless playlist of songs, from Tom Leher and Gilbert and Sullivan, to the Beatles and Jim Croce, to the Oakridge Boys. He mastered accents, re-wrote lyrics, and pulled all into song. He told great jokes, appropriate and otherwise, and reveled in making thoughtful and memorable toasts. He also was known as a sportsman and loved nothing more than family battles on the tennis court, the golf course or even the backgammon board. The perfect day in his life was a battle on the courts in the morning, a golf match that came down to the last hole in the afternoon, and an evening of laughter and song with friends and family. As a man of great faith he loved the church and especially the choirs. He deeply understood the role of music in worship and found great joy working with churches on revitalizing the choirs and their work. He appreciated the classic great works in the hymnals and certainly had his favorites.

In 2009, he was appointed a Commander Brother of the Most Venerable Order of the Hospital of Saint John of Jerusalem by HM Queen Elizabeth II. He believed in the goodness of humanity and looked for it in everyone who crossed his path. He sought joy and laughter every day.

Services: Funeral services will be held first in Florida, on Friday, March 23rd, 4:30p.m. at Christ Memorial Chapel, Jupiter Island. A second service will be held in St. Louis on April 14th, at 2 p.m. at St. Peter's Episcopal Church in Ladue.
Published by St. Louis Post-Dispatch on Mar. 4, 2018.
To plant trees in memory, please visit the Sympathy Store.
MEMORIAL EVENTS
To offer your sympathy during this difficult time, you can now have memorial trees planted in a National Forest in memory of your loved one.
MAKE A DONATION
MEMORIES & CONDOLENCES
38 Entries
God is a God of all Comfort and he will Comfort the Family's..My condolences...
October 21, 2019
The death of the president, reminded me of my good friend Bucky some 50 years agoj. We both lived in Grenwich, he worked for Hartford and I was his client...he from Yale and I from Harvard graduated in the same year and were both on a fast track in our respective organizations. His warmth and sincerity produced a solid friendship that I deeply cherish as one of the highlights of my business career.
Bob David
December 3, 2018
I remember Bucky from the 50's when he was a student at Hotchkiss where my father
was headmaster.
Jean Chappell
Acquaintance
December 2, 2018
In loving memory of a wonderful person. We will love you and miss you always. Continue restful heavenly peace!
Camella Ford
December 2, 2018
Dear family of Bucky Bush. He was one of my earliest clients (for sales training) when he was at Hartford National and then at Boatman's. He was among the very few who modeled caring deeply about clients, client's needs, and his sales force. Many spoke those words but few lived them. He was candid, caring, honest and a great learner and listener. Plus he and I loved Jim Croce. I lost track of him over the years but have good memories of a decent and high integrity person. The same went, by the way, for his older brother, Prescott, whom i knew well in New York City and Greenwich. Gerald Jones. Hingham MA.
Gerald Jones
April 18, 2018
Ironically Bucky has been in my thoughts lately. Only learned today of this sad news. He was a great friend, a generous "boss," brilliant conversationalist and extraordinarily kind person. I was blessed to have known you. Rest in Peace Dear Friend.
Judy Hinrichs
March 27, 2018
Round the Bend And Through the Narrow,
Bucky paddled on Straght as an Arrow.
And on this day, as we celebrate his life,
We know his guide again, is Patty, his wife.

With sorrow, joy and especially celebration, we portage on grateful to have lived in the same community with Bucky and Patty these many years.
A Keewaydin friend.
WmC Tom Bitting
March 23, 2018
From George Capen Bitting to Bucky's family - Bucky was a younger friend of mine ever since we went to Keewaydin Camp together in the late 1940's, always a 'good man,' thankful for all his blessings, part of a great and proud American family, with good and strong St Louis roots. God Bless You, Buck, R.I.P.
George Bitting
March 22, 2018
Condolences to the Bush family.
R D
March 12, 2018
My condolences to the Bush family
Ronald Markland
March 8, 2018
It's always sad to hear of someone's passing please accept my sincere condolences to the Bush family and may all of your fond memories of William be etched into all your hearts and minds.
March 8, 2018
My deepest sympathy goes out to the family. May the true God comfort your broken hearts. Psalms 50:15 says to call and God will deliver in the day of distress.
March 8, 2018
My condolences to the Bush family
Nicholas Grosse
March 7, 2018
Every time I crossed paths with Bucky he evoked all of the fine traits of the Bush family. He was a gentleman and had a great sense of humor. I hold him and his entire family in high esteem because of he way he led his life and this world is a lesser place with his absence. I send my sympathy and condolences to all together with a reminder that Bucky is not really gone. He has simply gone ahead.
Walter Lamkin
March 7, 2018
Grief can be so hard, but our special memories help us cope. Remembering you and your loved one today and always.
March 7, 2018
MY CONDOLENCES.
March 7, 2018
Not only in Missouri but all across this nation we will miss Bucky for his humble kindness and constant willingness to help others. His life will remain as an inspiration to those who knew him. All of us will draw from his generous spirit to improve our own performance. May God comfort his family at this time of loss.
John Ashcroft
March 7, 2018
May God bless you and your family in this time of sorrow.
G. Freeman
March 6, 2018
A warm and kind and generous citizen of St. Louis! May God grant eternal happiness to Bucky and consolation to the Bush family. -- Joe Duggan, St. Louis
March 6, 2018
Condolences to the family.
March 6, 2018
To the Family. So sorry for your loss. R.I.P.
Rocky Scirocco
March 5, 2018
May it comfort you to know that God as well as others care about your loss.

My prayers are with your family.

Sorry for your loss, may the lord of peace give you strength,comfort and healing as you go through this transition.
March 4, 2018
Bush Family, Friends,

Our condolences to the family at this difficult time. Cherish his memories. May the God who gives peace be with all of your_RO.15:33
March 4, 2018
Rest in peace.
You all are in my
Thoughts and Prayers.
G. H.
March 3, 2018
So very sorry for your loss of William H. T. Bush. Cherish all your good memories and all the advice he gave you all. May God give you the strength you need at this most difficult time. Deepest sympathy.
March 3, 2018
Rest in Peace
Scott Chamberland
March 3, 2018
Godspeed William....
Harry Simpson
March 3, 2018
While words fail to capture the pain of losing a loved one, we look forward to the time when words will capture the joy of having our Heavenly Father return our dear one to us. My prayers are with you and your family.
March 3, 2018
Showing 1 - 38 of 38 results