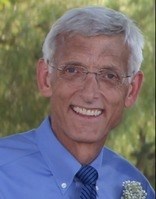 BORN
1953
DIED
2021
FUNERAL HOME
N.H. Scott & Hanekamp Funeral Home
1240 Waukegan Road
Glenview, IL
Chadwick Todd Raymond
Ames - Chadwick Todd Raymond was born on January 4, 1953, in Ames, IA, to Virgil and Solveig Raymond. He graduated from Roland-Story High School in 1971. He earned a Bachelor of Science from Iowa State University and a Master of Arts in Library Science from the University of Michigan.
Chad was Director of the Lincoln Township Library from 1977 to 1981, the Addison Public Library from 1981 to 1985 and the Executive Director of the Northbrook Public Library from 1985 to 2015. Chad was passionate about serving his community, promoting library services and legislative work to improve and support public libraries.
During his Northbrook Public Library tenure, Chad was dedicated to supporting and encouraging the staff as well as the Friends of the Library. In addition, he helped the library board champion major renovations and expansions throughout his career. Chad was particularly proud that in 2012, the library was chosen as one of the top 100 workplaces by the Chicago Tribune. On a personal note, library highlights included the 4thof July parades, staff in-services and the Annual Library Art Show. He was always first on the scene in inclement weather, and in heavy rain was often seen watching the water rise in the creek as if he could will it not to flood.
Chad was a Rotarian for thirty-nine years and had the privilege to serve on the Membership Committee and as President of the Rotary Club of Northbrook. He was a lifetime member of the Northbrook Civic Foundation and had good memories of running the Brat Booth at Northbrook Days. Over the years, he served in various churches as pastor liaison, usher, youth mission trip leader and Habitat for Humanity volunteer in Mexico. He humbly served as an assistant chaplain at Skyword Ministries at O'Hare International Airport. He adopted the Rotary's motto, Service Above Self, as his own.
After retirement, Chad enjoyed travelling and spending time with his wife, Nancy, who he met in Sunday School as a boy. She was truly the love of his life, and he was the love of hers. He enjoyed hobbies that included reading, exercise, motorcycles and trips to the family farm in Iowa. He was a registered parliamentarian and liked to read the dictionary in pursuit of interesting words. He caught a serious case of Go Blue Fever during his days at the University of Michigan that lasted for the rest of his life. He was a great listener and could engage easily with a stranger or a friend. In parting he was known to say, "Have a good life!"
In the last years of his life, he battled serious medical issues. He exhibited great courage. He faced these challenges never with a complaint and always with a smile. Despite illness and pain, Chad never lost his gentle and kind spirit. His uplifting optimism, silver lining outlook and humility will be treasured and missed.
Chad passed away on Monday, January 11, 2021, at his home in Northbrook at sixty-eight years of age. A gathering was held with immediate family at his home. He was cremated, and his ashes will be spread at his beloved farm in Iowa. Due to COVID restrictions, no additional services are planned.
Chad is survived by his wife, Nancy; two sons, Jason (Melissa) of Libertyville and Lucas (Kristen) of Grayslake; four grandchildren, Hayley, Jake, Lucas and Maddux; two step-grandchildren, Lily and Collin; a brother Scott (Carolyn) of Ames, IA; two brothers-in-law, Bruce (Jo) Mortvedt of Story City, IA; Tim (Deborah) of Wilton, NH, a sister-in-law, Jane Morgan of Mooresville, NC; five nieces, Amy, Teri, Anna, Emily and Jessie; two nephews, Karl and Ryan and twelve great-nephews.
Chad was preceded in death by his parents and two nephews, John Raymond and Samuel Mortvedt and great-nephew Elias Schaefer.
In lieu of flowers, memorials may be made to Smile Train (www.mysmiletrain.org), Skyword Ministries(www.moodychurch.org/skyword-minitries/) or Shelter Box USA, PO Box 5055, Santa Barbara, CA 93150 (in memo line: Ambassador Donna Lee Gulley Northbrook Rotary 6440) or www.shelterboxusa.org/donate
Published by Story City Herald from Jan. 14 to Jan. 20, 2021.
To plant trees in memory, please visit the Sympathy Store.
MEMORIAL EVENTS
To offer your sympathy during this difficult time, you can now have memorial trees planted in a National Forest in memory of your loved one.
Funeral services provided by:
N.H. Scott & Hanekamp Funeral Home
MAKE A DONATION
MEMORIES & CONDOLENCES
Sponsored by N.H. Scott & Hanekamp Funeral Home N.H. Scott and Hebblethwaite.
2 Entries
I just learned of Chad's passing today, Nancy. I'm saddened by the news. I was fortunate enough to be Chad's assistant at the Northbrook Public Library for two years. He was a consummate professional and a compassionate leader. Above all, he was a gentleman in every way and I was a better person having worked with him. My prayers for Chad, for you, and your entire family.
Tony Siciliano
Work
July 27, 2021
Nancy,Jason, Luke So sorry to hear of Chads passing. Please know you will all be in our prayers. Jeanne and Greg Eisinger
Jeanne Eisinger
January 22, 2021
Showing 1 - 2 of 2 results