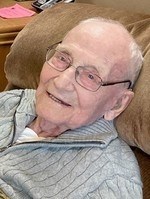 BORN
1922
DIED
2021
FUNERAL HOME
Soderstrum Funeral Home - Story City
618 Lafayette
Story City, IA
Ernest W. Anfinson
Nevada - September 23, 1922—May 20, 2021
Ernest W. Anfinson passed away peacefully at Rolling Green Village in Nevada, Iowa, on May 20, 2021. Graveside services will be Saturday June 5, 2021 at 10:30 am at Garner Townshop Cemetery in Council Bluffs. He was born September 23, 1922, son of the late Nora and Elmer T. Anfinson of West Union, Iowa. Among his survivors are his sister Lorraine Biermann and her husband Daryl of Eldorado, Iowa.
Ernie married Martha Lou Pelisek on March 21, 1948. They had five children: Peggy Schlegel and husband Bob of State College, Pennsylvania; Bill Anfinson and wife Darlene of Carter Lake, Iowa; Polly Lukens and husband Keith of Story City, Iowa; Dr. Ted Anfinson of Denver, Colorado; and Marilyn Sands and husband Jeff of Aurora, Illinois. He is also survived by eight grandchildren: Aaron Anfinson, Eric Lukens and wife June, Daniel Lukens, Joey Anfinson, David Sands, Dacia Sands, and Nathan Sands; three stepgrandchildren: Jessica, Michael, and William Baer; two great-grandchildren: Bethany Rose and Jeremiah Lukens; and many loving nieces and nephews. He was preceded in death by wives Martha Lou Anfinson and Jackie Wadsworth Anfinson and by daughter-in-law Christy Anfinson.
Ernie lived at Cedar Place in Story City from 2016 to the present. While there he became a member of the Story City Lions and Bethany Lutheran Church in Ames, Iowa.
Published by Story City Herald from May 28 to Jun. 3, 2021.
To plant trees in memory, please visit the Sympathy Store.
MEMORIAL EVENTS
Jun
5
Graveside service
10:30a.m.
Garner Townshop Cemetery
Council Bluffs, IA
Funeral services provided by:
Soderstrum Funeral Home - Story City
MAKE A DONATION
MEMORIES & CONDOLENCES
Sponsored by Soderstrum Funeral Home - Story City.
5 Entries
Ernie was the finest, kindest, man I have ever known. He had a deep commitment to all of his family and a deeper joy for life. He gave of himself and never judged anyone. He made my life richer during the time I knew him. He made this world better.
Sandy Hess
Friend
June 12, 2021
Ernest was my neighbor as I was growing up in Carter Lake. I moved out of my parents house and bought a house across the street which still meant Ernie was my neighbor. He was the best person ever, he was ALWAYS ready to help if needed. We had many a chats over the fence. He was a special pwrson.
Carla Wilson-Hunter
Neighbor
June 9, 2021
Thank you for your Service May you be Granted an Honorable and Restful Peace
Francis Durham VFW Dist 10 Chaplain
Other
June 1, 2021
Ernie was my neighbor for well over 20+ years and we were friends. Ernie was the nicest, most honest and dedicated man and his smile, laughter, advice and compassion was most endearing. I will never forget how he and Jackie were such good Friends to us nor how much we loved him for all of his ways. Rest In Peace Ernie.
Christy Elmasri
Friend
May 30, 2021
May God's promise found in John 6:40, of the hope to see our loved ones again, comfort your heart and give you peace, strength, and hope in the days ahead.
J.
May 27, 2021
Showing 1 - 5 of 5 results