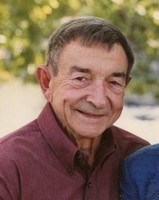 BORN
1928
DIED
2021
FUNERAL HOME
Soderstrum Funeral Home - Story City
618 Lafayette
Story City, IA
Jim Taylor
Story City - Jim Taylor, 92, died Saturday May 1st, 2021 at Bethany Manor in Story City from a well lived life and a worn-out body. A graveside funeral will be held at the Roland Cemetery in Roland Friday May 7 at 11 AM.
Jim was born November 3, 1928 in Dubuque Iowa to Ervin and Rosine Taylor. Jim grew up in Dubuque, Iowa City and Des Moines and graduated from Dowling Catholic High School.
In 1948 he married Margaret Ann Mulstay and to that marriage had 5 children. In March of 1973 he married Marjorie Ann (Inman) Amos. They lived in Shipley, Nevada, and Ames they found their forever home in Roland.
Jim was a carpet installer and owned Taylor Carpet Service. It is still almost impossible to drive anywhere in Story County without seeing a home or building he installed carpet within. He could size up a room without a tape measure and throw a roll of carpet to seamlessly make any wall-to-wall carpeted room look great. Over the course of his career, he taught many men the trade of carpet installation and was always proud of those who made it their vocation.
Things Jim enjoyed… being outdoors, whether that meant working in his garden or doing any kind of yard work, bowling a great line, playing a round of golf, where he was specifically proud of his short game. He always rooted for Freddie Couples or Phil Mickelson. Jim loved the Chicago Cubs, so 2015 was a really great year for him. Where the Chicago Cubs had his heart, he like to let his family choose his other teams. He could be a Hawkeye or a Cyclone, depending on who he was talking to. As for college football, the UNI Panthers recently surpassed all others, as he was looking forward to watching his great grandson play. He long ago gave up his pro football team and morphed into a Dallas Cowboy fan. Jim's interests all took a back seat to anything his grandchildren were doing. Due to them he spent many years sitting on bleachers, in gyms, football games at the Cub or Norsemen stadiums, or in a lawn chair at softball games. He could even be found in the auditorium on occasion watching a musical or play. Jim was always his grandkids' biggest fan.
Jim is survived by his sister Claire Russell of Cedar Rapids who celebrated her 100th birthday this year, 3 daughters; Rosemary (Dick) Allen of Nevada, Iowa, Debbie (Jim) Rexroat of Hawaii, Diane Perry of Des Moines; two sons Jim Jr (Suzie Ellerbrock) of Ohio, and John Michael (Stephanie Perry) of Texas. One stepson, Craig Amos of Ames and one stepdaughter, Ann (Boyd) Brodie of Roland. Grandchildren; Brad (Kristin) Amos of Virginia, Bryce (Sherry) Amos of Carlisle, Katie (Bill) Conway of Florida, Brian (Katie) Rexroat of Oregon, Debbie (Frank) Flowers of North Carolina, Mark Perry (Kellie) of Des Moines, Tina (Blair) Lane of Ohio, Ryland and Colton Taylor of Texas, Kelly Amos of Arizona, Josh Amos of California, Kristin (Zac) Hayward of New Zealand, Dan Brodie of Ames, Emily (Jonnie) Paton of Grand Cayman Island and 12 great grandchildren.
He was preceded in death by his parents; his wife, Marjorie; two brothers Bob and Bill Taylor; brother-in-law Bernie Russell, sister-in-law Pat Taylor, and his stepson Bob Amos.
Jim was a man who believed in second chances and willingly gave them. His mantra in life became simply…. God, grant me the serenity to accept the things I cannot change, the courage to change the things I can and the wisdom to know the difference.
Soderstrum Funeral Home is entrusted with arrangements.
Published by Story City Herald from May 5 to May 13, 2021.
To plant trees in memory, please visit the Sympathy Store.
MEMORIAL EVENTS
May
7
Graveside service
11:00a.m.
Roland Cemetery
Roland, IA
Funeral services provided by:
Soderstrum Funeral Home - Story City
MAKE A DONATION
MEMORIES & CONDOLENCES
Sponsored by Soderstrum Funeral Home - Story City.
0 Entries
Be the first to post a memory or condolences.