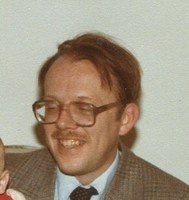 BORN
1942
DIED
2021
FUNERAL HOME
Soderstrum Funeral Home - Story City
618 Lafayette
Story City, IA
John Carlson
Story City - John Paul Carlson, 78, of Story City, Iowa died of cancer on February 19th, 2021 at Bethany Life in Story City. John was born on 7/3/1942 in Minneapolis, Minnesota, the eldest of Paul and Ruth (Smith) Carlson's 6 children. John spent his early childhood in Minneapolis and moved with his family to the Seattle area while he was in grade school. He earned his bachelor's degree from Washington State University and a PhD in biochemistry from the University of Utah. While working as a postdoctoral fellow at the University of Minnesota John met Nancy Malm at Grace University Lutheran Church. They were married there in 1980. Their son Carl was born in 1983 and the family moved to Des Moines, Iowa that year.
Following brief teaching appointments at Luther College and Drake University John joined the faculty at Grand View College (now Grand View University) in 1984 and taught chemistry there until his retirement in 2005. In 1993 the family moved to Story City and joined St. Petri Lutheran Church. John was an active member and particularly enjoyed singing in the choir. He loved music, loved to read and had a remarkable memory, especially for history.
John is survived by his wife Nancy, son Carl, brothers Tom and Roger, sisters Mary Carlson and Liz Larcom, brother in laws Craig Larcom, Fred Feiertag and Ted Malm and mother in law Elisabeth Malm. He was preceded in death by his parents, sister Anne Feiertag and sister in law Nancy Chinander.
Memorials may go to St Petri Lutheran Church or to the family who will direct them to support education at Grand View University.
Soderstrum Funeral Home is entrusted with arrangements
Published by Story City Herald from Mar. 26 to Apr. 1, 2021.
To plant trees in memory, please visit the Sympathy Store.
MEMORIAL EVENTS
To offer your sympathy during this difficult time, you can now have memorial trees planted in a National Forest in memory of your loved one.
Funeral services provided by:
Soderstrum Funeral Home - Story City
MAKE A DONATION
MEMORIES & CONDOLENCES
Sponsored by Soderstrum Funeral Home - Story City.
0 Entries
Be the first to post a memory or condolences.