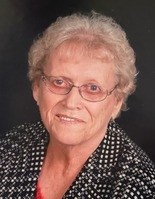 BORN
1936
DIED
2020
Martha Mehl
Story City - Martha Mehl, 84, passed away peacefully on November 6, 2020 at Mary Greeley Medical Center after a long battle with Alzheimer's disease and health complications.
Martha was born in Tysnes, Norway on March 2, 1936 to Johannes and Anna Hjelmeland. She was one of five siblings including a brother, Harold, and three sisters: Klara, Judith, and Solveig.
Martha married the love of her life, Kaare Mehl, on April 1, 1961 in Rosendal, Norway. Two months later the couple decided to move to America. They settled in Story City, Iowa where they have been happily married for 59 years.
Martha and Kaare raised two children, Jeanie Stephens and Jon (Michelle) Mehl. Family and friends experienced the meaning of unconditional love and anyone who knew Martha and Kaare knew that they were soulmates.
Martha enjoyed knitting Norwegian sweaters, and baking. Over the years, she attended many Roland-Story sporting events. She also enjoyed morning coffee with her friends and church family. In later years, you could find Martha and Kaare sitting out in their driveway every night enjoying the weather during the summer months.
She is survived by her husband, Kaare Mehl; a daughter, Jeanie Stephens of Story City; a son, Jon (Michelle) Mehl of Story City; three granddaughters Monica Mehl, Krista Mehl, and Kari Stephens; her brother, Harold (Signegy) Hjelmeland of Norway; and many nieces and nephews.
She was preceded in death by her parents and her three sisters; Klara, Judith, and Solveig.
The family would like to thank the staff at Mary Greeley Medical Center and Bethany Life for the exquisite care Martha received in her final days.
In lieu of flowers, a memorial has been established in her name. The family asks that donations be made to Immanuel Lutheran Church and Bethany Life, both in Story City, Iowa.
A visitation will be decided on a later date.
Online condolences may be left at www.schroederfuneral.com
Schroeder-Stark-Welin Funeral Home
Published by Story City Herald from Nov. 9 to Nov. 18, 2020.
To plant trees in memory, please visit the Sympathy Store.
MEMORIAL EVENTS
To offer your sympathy during this difficult time, you can now have memorial trees planted in a National Forest in memory of your loved one.
MAKE A DONATION
MEMORIES & CONDOLENCES
1 Entry
Martha was a wonderful woman. She was also my babysitter 55 years ago when my family lived in the basement of the Mehl's home. She knitted the most remarkable sweaters I have ever seen. I know this sounds cliché but the world truly was a better place with her in it...and now Heaven is.
Ron Ridgway
Friend
November 9, 2020
Showing 1 - 1 of 1 results