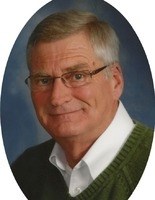 BORN
1950
DIED
2021
FUNERAL HOME
Boeke Funeral Home
201 E. Minnie
Radcliffe, IA
Terry Lee Thompson
Terry Thompson, age 71, of Story City, IA, passed away on Saturday, February 27, 2021, at the Mercy Medical Center in Des Moines, IA.
A flowing visitation and funeral service was held on Thursday, March 4, at the Immanuel Lutheran Church in Story City. Burial followed in the Story City Cemetery.
Terry Lee Thompson was born February 24, 1950 to Milford and Margaret (Anderson) Thompson in Webster City, Iowa. He was the third of four sons.
Terry was confirmed into the Christian faith at St. Paul's Lutheran Church in rural Jewell, Iowa, just two miles from his family's farm.
He attended school in Randall, Iowa until the seventh grade, then transferred to South Hamilton Community School in Jewell, where he graduated in 1968. While in Randall he attended daily Bible classes as part of their curriculum. In high school he was active in football and wrestling, but his true talent and love was music. He enjoyed performing in musicals such as "South Pacific", "My Fair Lady" and the "Music Man" and earned music All State awards his junior and senior years. Terry also sang with his three brothers at many social events in the community. Terry attended Ellsworth Community College in Iowa Falls, Iowa and Mankato State in Minnesota.
In 1969 he met, Linda Golf, the girl of his dreams on a blind double date. On September 16, 1972 they were married at Our Savior's Lutheran Church in Radcliffe, Iowa. To this union two children were born: Jason Lee and Lisa Renee. They built their home and enjoyed life in Story City, Iowa.
Terry's career was in agriculture related businesses including Farmland Industries, where he worked in sales and marketing. He traveled throughout Iowa and the Midwest. Because Terry was the type of person who 'never met a stranger', he excelled at his job. He was valued by many. While Terry retired in 2016, he never really left the job as he continued to work part-time at the Co-op. He loved his work and the people there so much.
Terry enjoyed life to the extreme – especially with his family and friends. Fishing with his brothers, children and grandchildren, friends and business associates was a particular favorite pastime. He was also a great cook and loved serving his family.
He was a long-standing active member of Immanuel Lutheran Church in Story City where he willingly shared his leadership skills. He served two terms as church president, as well as serving as a deacon and trustee.
Terry passed away Saturday, February 27, 2021 surrounded by his loving wife and children at Mercy Medical Center in Des Moines, Iowa at the age of 71 due to a heart attack.
Those left to cherish his memory include his wife of 48 years, Linda, his son, Jason; daughter, Lisa (Chris) McIlrath; grandchildren, Tyler and Ellyson Thompson; Adam, Heston, Myles and Laura McIlrath; his mother, Margaret Thompson; brothers and sisters-in-law Bruce (Lori), Dennis (Pat), and Douglas; brother-in-law and sister-in-law Bruce and Phyllis Coburn; nieces and nephews, Eric (Brooke) Thompson, Kylie (Michael) McDonald, Mark (Kelly) Thompson, Brian (Pauley) Thompson, April (Jamie) Ward, David Thompson, Kara (Michael) Schacherer, Sara (Jason) Martin, and Bryce (Katy) Coburn, and many great-nieces and nephews.
He was preceded in death by his father, Milford in 1994, his father-in-law, Philip Golf in 1998 and mother-in-law, Rhoda Golf in 1993.
Memorial contributions may be directed to the family for a memorial fund to be established.
Boeke Funeral Home of Radcliffe is in charge of the arrangements.
For more information and online condolences go to:
www.boekefuneralhomes.com
Published by Story City Herald from Mar. 26 to Apr. 1, 2021.
To plant trees in memory, please visit the Sympathy Store.
MEMORIAL EVENTS
To offer your sympathy during this difficult time, you can now have memorial trees planted in a National Forest in memory of your loved one.
Funeral services provided by:
Boeke Funeral Home
MAKE A DONATION
MEMORIES & CONDOLENCES
Sponsored by Boeke Funeral Home.
0 Entries
Be the first to post a memory or condolences.