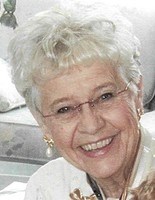 BORN
1929
DIED
2021
FUNERAL HOME
Hohner Funeral Home
1004 Arnold St
Three Rivers, MI
Doris J. Younts
Three Rivers - Doris J. Younts, 91, of Three Rivers, went to be with the Lord on Tuesday, July 13, 2021, with her loving family at her side.
Doris was born in Three Rivers on September 11, 1929, the daughter of the late Jasper and Carrie (Wallace) Jarratt.
Doris was a kind and loving woman whose gentle nature and warm smile made her a joy to be around.
She remained a lifetime resident of Three Rivers, and was always proud of her home and community.
On June 27, 1947, she married Jesse Younts who preceded her in passing in 1983. Together they raised three wonderful children and made a happy home. In 1987, she remarried Roy Engelbrecht who also preceded her in passing in 1993.
Doris was a hard worker and believed in being active in her community. In addition to her work as clerk at the St. Joseph County Road Commission for 20-plus years, she was a 4-H leader for many years, served on the Three Rivers Area Hospital Board of Directors, and was Chairman of the St. Joseph County Parks and Recreation Board.
When not serving others, Doris enjoyed spending time in her flower and vegetable gardens, and would always share the harvest of her labor with those around her. She was a wonderful cook and baker, and holiday meals were always best at her home. Her greatest joy however always came from spending time with her children, grandchildren and great-grandchildren. She was active in their lives, and leaves many happy memories for them to treasure.
Doris is survived by three children, Linda (Michael) Davis, William (Louanne) Younts and Gary (Connie) Younts; eight grandchildren, Matthew (Angela) Pakula, Elizabeth (Jason) Tisch, Paula (Ernest) Hawkes, Benjamin (Nichole) Younts, Scott (Cassandra) Younts, Carrie (Mark) Martin, Michelle Roberts, and Dawn Younts; two step-grandchildren, Michael Davis Jr., and Elizabeth O'Malia; 25 great-grandchildren, Claire and Katherine Pakula, Samuel and Jarratt Tisch, Isabelle, Ernest IV, Pauline, and Isaiah Hawkes, Avian, Mayleen, Rilyn, Keturah, Madison, Jordan and Ellery Younts, Selena and Chase Martin, Tyler, Aayla and Jacob O'Malia, Camdyn Davis, Hannah Roberts; a sister, Shirley Lockwood; several nieces, nephews, cousins, and great friends.
She was also preceded in passing by two siblings, Thomas "Jerry" Jarratt and Ethel Bernice Dobrowski.
A service to celebrate her life will be held on Tuesday, July 20, 2021 at 11:00 a.m. at the Hohner Funeral Home, 1004 Arnold St., Three Rivers, with Pastor Brian Lutz officiating. A visitation will be held at the funeral home on Monday, July 19, 2021 from 5:00-7:00 p.m. Interment in Riverside Cemetery.
Memorial contributions may be made to the Smile Train for Cleft Palates. Envelopes are available at Hohner Funeral Home in care of her arrangements.
Online condolences may be shared at www.hohnerfh.com.
Published by Sturgis Journal from Jul. 16 to Jul. 17, 2021.
To plant trees in memory, please visit the Sympathy Store.
MEMORIAL EVENTS
Jul
19
Visitation
5:00p.m. - 7:00p.m.
Hohner Funeral Home
1004 Arnold St, Three Rivers, MI
Jul
20
Service
11:00a.m.
Hohner Funeral Home
1004 Arnold St, Three Rivers, MI
Funeral services provided by:
Hohner Funeral Home
MAKE A DONATION
MEMORIES & CONDOLENCES
Sponsored by Hohner Funeral Home.
0 Entries
Be the first to post a memory or condolences.