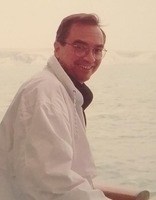 BORN
1939
DIED
2021
FUNERAL HOME
Dutcher Funeral Home - Coldwater
440 W Chicago St
Coldwater, MI
James Lawrence "Larry" Ives
Sturgis and Coldwater - James Lawrence "Larry" Ives, 81, long time resident of Sturgis and Coldwater, passed away peacefully on July 1, 2021 surrounded by family at Parkview Hospital, Fort Wayne.
He will be cremated in accordance with his wishes. A celebration of Larry's life will be held on Saturday, July 17, 2021 at Dutcher Funeral Home in Coldwater from 11:00 – 1:00 pm.
Larry was born in Highland Park, MI on October 30, 1939 to Leland and Elizabeth Hazel (Rowe) Ives and grew up in Romeo, MI. Larry attended John Carroll University, Wayne State University, and graduated from Western Michigan University with a degree in Accounting. He married Martha (Gompf) Ives on June 20, 1964 in Detroit. Their marriage ended in divorce in 1990. Larry moved his family from Royal Oak, MI to Sturgis in 1967 to open an office for the accounting firm of Doren, Mayhew, Grobe & McNamara. He later worked for Key Industries, owned Larry's Funderland toy store in Sturgis, and for many years was the proprietor of James L. Ives, CPA, an accounting practice serving businesses and individuals in southern Michigan and northern Indiana. Larry married Linda (VanDeWalker) Ives on December 21, 1993 in St. Thomas, USVI. Larry and Linda lived in Coldwater and spent many happy years together traveling and enjoying a variety of activities.
Larry had many enjoyments throughout his life. He raised Black Angus cattle on a small farm and remodeled a farmhouse. He coached the Sturgis First National Little League baseball team for several years and navigated the team to a surprising tournament championship in 1976. He was an avid fisherman and kept a fishing boat on Lake Michigan, providing family and friends many weekends and summers of enjoyment and wonderful memories. Larry was a skilled card player and a lifetime member of the Elks. He also owned several harness race horses over the years. He and Linda enjoyed country dancing, spending time with friends, and overseas travel. Larry was a devoted husband and father, and he had a wonderfully dry sense of humor. With strength, endurance, and good cheer Larry lived with Type I diabetes for over 50 years and with a diagnosis of Multiple Sclerosis for over 20 years.
Larry is survived by his wife Linda Ives of Coldwater, son Tom Ives of Dallas, son Mark (Karla) Ives of Indianapolis, grandson Will Ives of Dallas, nephew Dennis (Sue) Ives of Romeo, sister-in-law Merrilee Johnson, and brother-in-law Michael D. Miller. He was preceded in death by his parents, his brother Duane Ives, sister-in-law Catherine Ives, an infant brother, a cousin Dick Higgins, and a nephew Darrell Ives.
The family suggests those wishing to make a memorial donation in Larry's memory consider the Branch Area Food Pantry https://branchareafoodpantry.com. www.dutcherfh.com
Published by Sturgis Journal from Jul. 13 to Jul. 14, 2021.
To plant trees in memory, please visit the Sympathy Store.
MEMORIAL EVENTS
Jul
17
Celebration of Life
11:00a.m. - 1:00p.m.
Dutcher Funeral Home - Coldwater
440 W Chicago St, Coldwater, MI
Funeral services provided by:
Dutcher Funeral Home - Coldwater
MAKE A DONATION
MEMORIES & CONDOLENCES
Sponsored by Dutcher Funeral Home - Coldwater.
2 Entries
Thank you coach Larry for being a great coach, and I had a blast of a time playing for first national bank little league baseball. Thank you and God bless you in heaven.
Scott Magnus
August 9, 2021
Larry and I grew up together in Romeo and had many happy events in our lives. From 1960/62 we shared an apartment in Detroit while Larry worked for Kroger and I worked for GM Photo on W.Grand Blvd. His wedding and my wedding were held on the same date in 1964 and we never saw each other after that date. It is nice to learn that he led a full productive life. I will carry many fond memories of him as long as I live. Sincerely, Jim Tyler
James R. Tyler
Friend
July 19, 2021
Showing 1 - 2 of 2 results