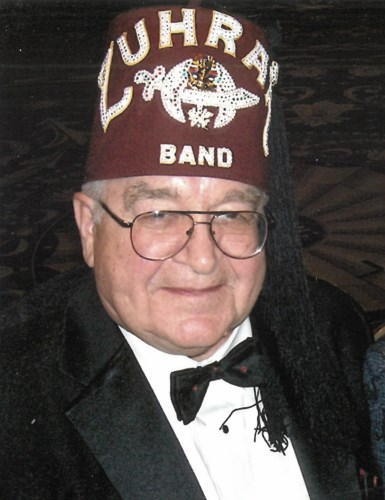 Son of Alfred A. and Lena J. (Enninga) Rausenberger. Jim graduated from Fulda, MN high achool in 1956. Attended Wartburg College in Waverly, IA. Served with US Army in Germany, 1961-1964. On June 2, 1961, he was united in marriage to Karen L. Weck of Slayton, MN. He was employed with IBM, Intel, and Control Data for 30 years. In 1988, he was united in marriage to Marva M. Bourassa-Taylor. He was employed in the Clark, SD school system. In 2001, they moved to Aberdeen, SD, he was employed at Kesslers Market. In 2009, he retired and move to St. Louis Park, MN.

Jim's great love was playing his saxophone. He played with "Osman Shrine Band" in St. Paul, the Yelduz Shrine Band in Aberdeen, SD, and Zhurah Shrine Band in Minneapolis. Jim also played in the Minneapolis Post Office Band and Synod Senior Band of ELCA Lutheran Church in St. Louis Park. Jim was an active member of Christ the King Lutheran Church, Bloomington, MN. He also enjoyed being with family and friends. Jim was a wonderful and loving man.