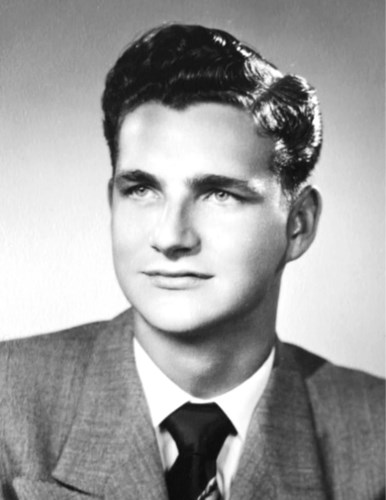 Dale had a long broadcasting career, having worked for radio and television stations in Dickinson and Fargo. His longest broadcasting tenure was with KOVC in Valley City, ND, where he was general manager. Dale popularized KOVC's Noon Show and became known as the "Voice of the Valley." Dale was an active community volunteer, having served as Valley City mayor and school board president. He also served on the Blue Cross/Blue Shield and League of Cities Boards of Directors. Dale was also a veteran of the Korean War.

Dale and his wife of 70 years, Beverly, most recently resided in Apple Valley and he remained active with the Summerhill Coop, the Minnesota Zoo, and the Medora Foundation. Always curious, Dale never shied away from a meat and potatoes menu and was immensely proud of his Norwegian ancestry.

A Celebration of Life is scheduled for November 20 at 2:00 pm at Grace Lutheran Church, Apple Valley, MN and for April 30, 2022, in Valley City, ND. Memorials made to American Legion Post 1776, or Bethlehem Cemetery.

Published by Sun This Week from Oct. 27 to Nov. 10, 2021.
To plant trees in memory, please visit the Sympathy Store.
MEMORIAL EVENTS
Nov
20
Celebration of Life
2:00p.m.
Grace Lutheran Church
Apple Valley, MN
MEMORIES & CONDOLENCES
4 Entries
Randy and family, I was so sorry to hear of your dad's death. I know it has been years since we have been in contact, but we travel from Hawley to Valley City once a week to visit my mom in the care center. As I come down the hill, I many times think of having grown up on 9th Avenue S.W. in Valley City and all the memories of the neighborhood games. All of those memories are a lifetime ago. My dad has been gone thirteen years and the pain of missing him will never, ever go away. Loving and loss are both part of life, but the loving is so much easier and makes loss so much harder. Your family is in my thoughts and prayers as your family deals with the loss of your dad.
Bobbi (Johnson) Siegel
November 23, 2021
To Beverly and family our sincere condolence on Dale's passing. We always enjoyed visiting you and Dale at the Leonard Olson farm etc. You and your family are in our thoughts and prayers. Joyce and Punk
Joyce (olson) Dahl and Francis Dahl
Family
October 29, 2021
Our thoughts and prayers for Beverly and the rest of the family, we just lost our last uncle Don Liebing who was also a Korean War veteran. It doesn´t seem that long ago when we were eating picnic dinner at Leonard Olson´s farm - Anderson family picnic- love to you from all the Flach´s and God´s blessing forever.
Dave Flach
Family
October 29, 2021
Randy, Rob and family. I am sorry to hear of your father´s passing. I will keep you in my thoughts and prayers.
Tom Berg
October 29, 2021
Showing 1 - 4 of 4 results