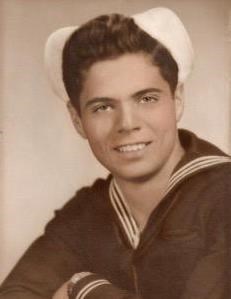 FUNERAL HOME
Landmark Funeral Home
4200 Hollywood Blvd
Hollywood, FL
ANTHONY J. LOCONTO, 93, of Hollywood, passed away September 15, 2021. Originally from Boston, Massachusetts, he spent his youth in Cambridge, Massachusetts, and attended St. Francis Seminary and later Boston University. Tony proudly served in the United States Navy and later became a letter carrier for the U.S. Postal Service. He was a proud member of the National Association of Letter Carriers, Branch 1071, for over 50 years. Tony was married to the love of his life, Mary Jane (Broughton) from 1952 until her passing in 1999. Anthony is survived by his sons Anthony, Jr. and Ronald, daughter, Mari-Jayne (Henry) Kozerski, brothers Frank (Phyllis), Robert (Pam) and Richard (Jayne) and three grandchildren Daniel, Alison, Kevin and his dear friend Barbara Crosta.

The family will be receiving friends on Tuesday, September 21, 2021, from 5:00 to 8:00 pm. Prayer service will be at 7:00 pm all at Valerie Panciera's Landmark Funeral Home. Following a 10:00 am Mass on Wednesday, September 22, 2021, at Nativity Catholic Church in Hollywood, Anthony will be laid to rest in Our Lady Queen of Heaven Cemetery in North Lauderdale.

The family would welcome donations in our father's memory to the Jimmy Fund at :