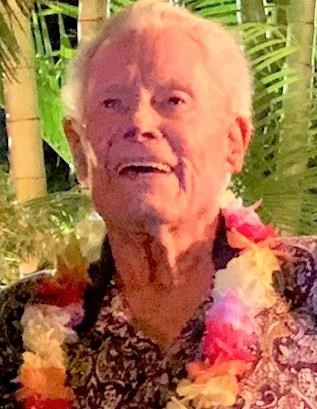 James proudly served as a Military Police Corporeal in charge of POW's in the U. S. Army during the Korean War from December 11, 1950, until his Honorable Discharge on December 1, 1952, having been awarded the Korean Service Medal and United Nations Service Medal.

In approximately 1953, James embarked with a couple of his buddies on an adventure to Fort Lauderdale, Florida, embracing all that this fine city has to offer and became a City of Fort Lauderdale Beach lifeguard. Not soon after, he met the love of his life, Geraldine Marcella Gallatin. They were married in 1954 and blessed with four children, Jamie Ashley, JoAnn Greenwald, James, Jr., and Jeffrey Morgan.

James pursued a variety of employment endeavors after his lifeguard days … truck driver for the Pepsi Cola Company, working in the pool service industry (even owning his own pool service company - Morgan's Pool Service), setting up banquets for Bahia Mar Hotel (from whom he finally sought his retirement) and worked part-time during his retirement as a stock clerk for Winn Dixie.

In their free time, James and Jeri enjoyed traveling throughout Florida, with multiple stops at their favorite spots, Disney World Parks and St. Augustine; and going to the movies, dining out, and scouring shops to enhance their love of Department 56 and Beenie Baby collectibles. James loved setting up elaborate Department 56 Christmas village displays for all to enjoy. He loved watching western shows and movies, and was a diehard University of Miami Hurricane football fan, and a University of Florida girls' softball fan. Always keeping James company were his multiple sweet feline companions which he spoiled rotten.

We are comforted knowing Dad is now reunited with our loving Mom, and our brother, Jeff, Dad's brothers, Allen (Tink) Pratt Morgan and Robert (Bobby) Kent Morgan, and nephew, Allen (Buddy) Pratt Morgan, Jr. (deceased). Surely, The Canes and The Gator Girls can hear them all the way from Heaven on game days!! Dad is survived by his children, Jamie Beth Ashley, JoAnn Grace Greenwald, James B. Morgan, Jr. (Rosie), and grandchildren, Phillip Ashley (Nicole), Hailey Rose Burke-Morgan, Charles Medina (Nichole), Steven Medina, Ryan Greenwald, Bubba Greenwald; great grandchildren, Sophia and Christopher Medina, and Dallas, Kayla and Daniel Ashley; his very special niece and nephew, Barbara and Scott Sibila, as well as nieces Randee Ketzel (Eric) and Mary Jones (Eric) and their children, Samantha and Eric Ketzel, and Trevor Jones; and his favorite sister-in-law, Carole Jean Salvino Morgan. A special acknowledgment of appreciation is made to Stewart and Wendy Johnston, Jill McCormick, all Dad's friends at "Angelo's" Andrews Diner for all of the kindnesses extended to Dad, and to his Wilton Manors' friends and neighbors for their thoughtfulness.