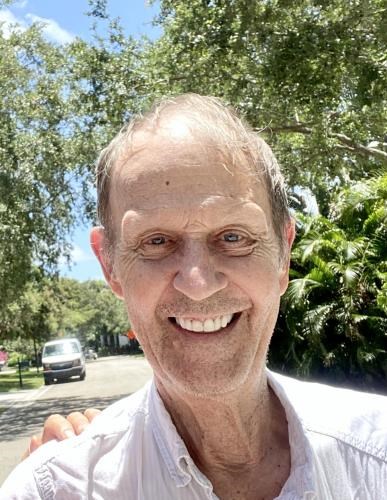 BORN
1948
DIED
2021
Jeffrey Davenport West, of Stuart, Florida passed away at Memorial Herman Hospital in Houston, Texas on September 24, 2021 after a long battle with cancer. He was born in New York City in 1948 and grew up in Teaneck and Englewood, New Jersey. He was the oldest of four sons to parents Davenport and Patrica Salter West.

Jeff attended the Dwight Englewood School in Englewood, NJ and the Choate School in Wallingford, Connecticut. Jeff earned a BA at the University of North Carolina at Chapel Hill 1971 and an MA from the Tuck School of Business at Dartmouth University 1972.

Jeff had a lifelong love of the ocean, sailing, and fishing, which he acquired from summers on Cape Cod, Massachusetts. In the 1960s, as a member of Stone Horse Yacht Club, he became a well-respected competitive sailor.

He was first employed by the Xerox Corporation in Rochester, NY. He and his family purchased a farmstead in Sodus, New York.  Much sweat and love went into the renovation of the house and property, which was fondly called Crumble Farm.

In the 1980s, Jeff was hired by OAK Investment Partners, a venture capital investment firm based in Westport, Connecticut. There, living with first wife, Valerie Kinnicutt and young son Davenport, he was able to return to his favorite hobbies, boating and fishing. He became especially interested in pursuing billfish through charters with well-known captains fishing on the edge of the continental shelf and offshore canyons.

Eventually, Jeff took a new job opportunity with OAK to move his family to Atherton, California, spearheading their Silicon Valley investment initiatives in the eighties.  After many successful years in California, he decided to make the move to fulfill his ultimate life dream. He moved to St. John, US  Virgin Islands and started an independent sportfishing enterprise, taking advantage of the one of the prime billfishing areas in the world. His 48' Garlington sportfishing boat, "Courtesan," was well known in the Caribbean sportfishing circuit. Jeff's fishing adventures took him to many exotic destinations, including Venezuela, where he married Kay Allen Breese in 1997.

He had no lack of eager visitors to his paradise in St. John. Jeff and his wife Kay hosted many family events and holiday parties over the years at their compound in Chocolate Hole. Although Jeff's mother loved visiting, she made it earsplittingly clear that she was not fond of the 45 degree incline jeep-ride up and down the mountain.

After many years, he and his family left the Virgin Islands and moved to Cape Cod where he renovated several houses, and also acquired his real estate license. Eventually, he made a final move to Florida in 2004. Of course, never able to take a rest from his entrepreneurial spirit, he purchased an historic residential property called EdenLawn Plantation near his home in Stuart, Florida.

Jeff is loved and will be sorely missed by his family and friends. He will live with us always as beloved husband, father, brother, and friend.  He was often a mentor and certainly imbued his love of the ocean to his son Davenport.  Above all, we will remember him as our fearless "Captain."
Published by Sun-Sentinel on Nov. 30, 2021.
To plant trees in memory, please visit the Sympathy Store.
MEMORIAL EVENTS
To offer your sympathy during this difficult time, you can now have memorial trees planted in a National Forest in memory of your loved one.
MAKE A DONATION
MEMORIES & CONDOLENCES
2 Entries
Our deepest condolences on Jeff´s passing. May God bless you and your family in this time of sorrow. Rest In Peace Jeff.
Louis and Cynthia Warner
Family
December 7, 2021
A well-lived life. Rest In Peace, Jeff.
Nina West
Family
December 2, 2021
Showing 1 - 2 of 2 results