Stephen Joseph Ladika
Ladika, Stephen Joseph, of Boca Raton, passed away peacefully on August 24, 2011 at age 83. He is survived by his sister Mary Schihl, his two loving children Heidi Ladika-Cipolla and Matthew Ladika, four grandchildren, as well as many nieces and nephews. Steve was born in Buffalo, N.Y. on March 24, 1928. He completed his education at St. Bonaventure University. Having heard God's call early in his life, Steve was ordained a Catholic priest on June 7, 1952, in the Diocese of Buffalo. After serving the Church faithfully for 13 years, Steve was granted leave from the priesthood and married Maryann Denz on August 23, 1965. Newly married, Steve and Maryann moved to Boca Raton, FL, to start a family. In January of 1968, Steve started work at Boca Raton Community Hospital as Personnel Director. He steadily progressed to Vice President of the hospital. In April of 1977, after the tragic loss of Frank and Pat Dawson, Steve was made President and Chief Operating Officer of Boca Raton Community Hospital. He passionately served in this position until March of 1988. In 1989, he was named Trustee Emeritus, until his full retirement in 1990. The next 15 years were quietly shared with his beloved wife Maryann, children and grandchildren. When Maryann passed away on Nov. 19, 2004, the loss of his soul mate was very painful. But Steve's great faith in God helped pull him through. Steve had a love for life and people, and was blessed to have so many good friends. He touched many lives with his generosity and good humor. We hope he touched your life in a positive, memorable way. A Mass of Christian Burial will be celebrated Tuesday, August 30, 2011, at 11 a.m. in St. Joan of Arc Catholic Church, 370 S.W. Third Street, Boca Raton, FL. Memorial contributions to be made in lieu of flowers to Boca Raton Regional Hospital Foundation (BRRH Foundation), 745 Meadows Road, Boca Raton, FL 33486. Glick Family Funeral Home is in charge of arrangements.

Published by Sun-Sentinel from Aug. 26 to Aug. 27, 2011.
To plant trees in memory, please visit the Sympathy Store.
MEMORIAL EVENTS
To offer your sympathy during this difficult time, you can now have memorial trees planted in a National Forest in memory of your loved one.
MAKE A DONATION
MEMORIES & CONDOLENCES
13 Entries
Heidi,
So sorry for your loss, after seeing you in North Carolina, I wondered how your father was and after losing my father just months ago, I understand how great the loss is. My thoughts are with you and your family.
Lois Pasapane
September 2, 2011
Dear Heidi & Matt,
Although we've never met I want to express my condolences to you and your family on the passing to eternal life of your beloved dad. I was the organist at that church when he was the associate pastor. He was a gentleman of the first class and we had some good laughs from time to time.
He touched my life in a special way. I have fond memories of him!

Anthony Woronowski, Sautee,Georgia
Anthony Woronowski
August 31, 2011
Dear Ladika Family,
So very sorry to hear of the loss of your Dad - I remember him fondly as Associate Pastor at St. John the Baptist in Alden, NY - I was in grade school and I always thought he looked like Perry Como - we were all very happy for him when he met your mom and began a new life in Florida - we hope that the fond memories of both your parents will help you at this sad time.
Darlene Dahl
August 30, 2011
I have many favorite memories and stories about Steve and Maryann but the most recent took place only a couple of weeks before his surgery.
He called me as he did many times and said "what are you doing?" I am taking you to lunch and then we are going to look at Mercedes Benz automobiles?" I told him I needed to go to Home Depot and he said great there is one accross the street from the dealership. If you know Steve he always got the results he wanted. So, off we went.
He demanded we stop at Home Depot first and then proceeded to the Dealership. Within 5 minutes he had 3 salesman vieing for his attention. We viewed every show room convertible both pre-owned and new. He decided to work with a ex Navy Seal salesman and surrendered the keys to his car so they could value his car.
After an hour of negotiating, I discovered why we were there. Steve had been planning for some time to trade in his car and purchase a new E-350 convertible for his "peaches & cream" Heidi. He said she would look great behind the wheel of a cream colored fun mobile.
After two and half hours I received a call from Heidi wanting to know where her dad was and what he was doing. I told her and she gave me explicit orders, "Do not let him purchase that car". I have dedicated my entire 45 year career to sales and marketing and the toughest sale I ever made was getting Steve to NO on the purchase of that car.
I loved him and will miss him and hope to join him and Maryann in heaven.
Jim Giancola
August 30, 2011
Heidi and Matt - Will always remeber your Dad as a great person and friend. One of the few that always had his door open to visitors. Some famous Steve quotes: "I didn't ask you if you were alright, I asked you do you want to drink!" "Take Charge PAUL!" "Big Burly Dan" "Sunk of a Ditch" A great man - In my thoughts and prayers -
Dan Flanagan
August 29, 2011 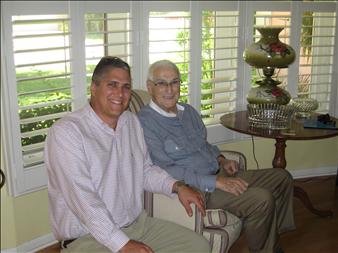 Mary Alice
August 28, 2011
Heidi and Matt - I will never forget the incredible strength and support the Ladika family provided my family upon the passing of my mother and stepfather, Pat and Frank. Please know that you are in our thoughts and prayers. Steve, Maryann, Pat and Frank are together now and we can cherish the wonderful memories we have of them!
Mary Ann Sandell Forrester
August 27, 2011
Dear Heidi, Matt, family and friends,

What a guy! Steve surely was generous about sharing his love for life and had many friends because he was a friend to many.
I laugh when recalling times of he and I laughing, at who knows what, until tears rolled down our faces. There were quite a few of those times, thankfully!
There’s no question he touched my life positively and I have many, many happy memories I’ll carry with me forever and also know others, who will do the same.
When I think of not seeing Steve again, my memories lessen my sadness and return me to that wonderful spiritual connection within of being with Steve Ladika, as I believe he would want it to be, for everyone he loved.
I hope you’ll find peace and joy in your memories as well.
Jesus, Mary and Joseph; Steve, “The Big Guy”, is on his way, hold on to your hats! You’re going to have some fun with a great and wonderful spirit!
Maryann, I hope you have them prepared!
Ed White
August 27, 2011
Heidi and Matt, we would like to express our condolences. Your dad was my cousin and I have fond memories of growing up with him in Buffalo/Lackawanna, NY. He was a good man. He and you are in our prayers. Mary (Klemenich) Grgas
Mary Grgas
August 27, 2011
I would like to express my sincere condolences to Matt, Heidi , and the entire family. May your love and fond memories help ease your loss.
I had the privilege of working closely with Steve at BRCH during the 70's. He was one the kindest and finest gentleman that I have ever met......both at work as well as away from the office. We shared many enjoyable and hilarious times and I will treasure them always.
Rest in peace my friend.
Dave Wood
August 27, 2011
Heidi and Matt,
You have our deepest sympathy for your father.
To let you know we are Steve's cousins from Buffalo, N.Y.
and will keep him in our prayers. God bless him and you both.

George and Lillian Loncar
August 27, 2011
Heidi and Matt,
Please know that your family is in our prayers. Your father was a man of strength, love, and humor. May God grant you peace and comfort.
Tracey Sandell Wagner
August 27, 2011 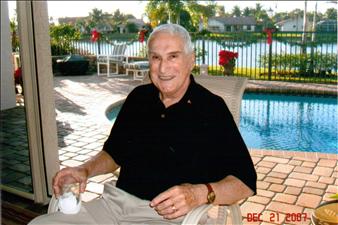 I would like to take a moment to express my sadness after hearing that Steve had passed away. I was so happy to have seen him a couple years ago at a small get together of former employees of Boca Raton Community Hospital. Steve gave me my first job as Personnel Assistant. I remained with the Hospital for 9 years. During that time Steve and Maryann were so wonderful to me. Often, I would babysit Matt and Heidi. Maryann held a bridal shower for me when I became engaged. Steve bought me my first drink on my 21st birthday! But more importantly, he was the most kind and wonderful man and there was nobody I admired more. I remember and appreciated his fatherly talks on our drives down to Miami for Hospital Association meetings. Now matter how busy he was he always made time. I am glad to have had the opportunity to see him again before he passed away to have told him how important he was in my life. I will never forget that big grin and wonderful laugh. He was loved by so many people, including me.
Malia Hoffstot
August 26, 2011
Showing 1 - 13 of 13 results