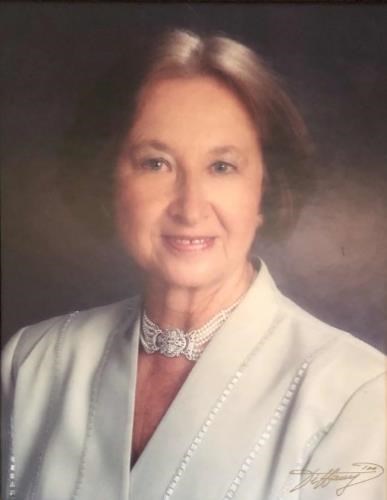 Veronika and George settled in Fort Lauderdale in 1972, following their purchase of Industrial Plastic Products, Inc. in Miami Lakes. They successfully managed the company for over thirty years until it was sold in 2006. When they weren't working hard at the company; they were playing hard in the community they loved, and were actively involved in a host of community organizations. Veronika was an active member of the US Navy League Fort Lauderdale Council, and supporter of its Spruance Sea Cadet Program, Seafarers' House at Port Everglades, Naval Air Station Fort Lauderdale Historical Association, Symphony of the Americas, The Opera Society, and the Royal Dames of Cancer Research.

Born in Kiev, Veronika at the age of 6 escaped Russia during World War II with her parents in 1944. Her Father, Boris Baranow, a prominent metallurgical engineer and scientist, taught at the University of Berlin, and later at the war's end, worked with the American forces occupying Germany. Her family later immigrated to Buenos Aires, Argentina, where she completed her studies, and became a freelance photographer and had her own studio. Even then she was involved with charitable organizations, especially for Russian immigrants exiled from the USSR. Veronika also sang with the renowned Russian Choir in Buenos Aires for many years.

During one of her charitable events, a Russian Ball, she met a young dashing Brit recently arrived in Buenos Aires following distinguished war service in the Royal Air Force, and he stole her heart. In 1964, they followed their dreams, and along with their daughter Tatiana and two poodles, moved to the United States. George's experience as a plastics engineer took them to Troy, New York, Pittsburgh, Pennsylvania, New Jersey and ultimately, Fort Lauderdale, Florida.

Above all else, Veronika was devoted to her family and to the country she adopted and made her home. She had a zest for life, and travelled the world with George, her children and later her grandchildren – cruising and travelling to China and Russia with them. She was always on the go, and her strength and stamina inspired all who touched her.

A private family church service will be held. In lieu of flowers, to honor Veronika Thorne, donations can be made to the Fort Lauderdale Naval Sea Cadet Program. Checks in support of the new Sea Cadet Building should be made payable to: NLUS Sea Cadet Building Fund, PO Box 350625, Fort Lauderdale, FL 33335-0625. Please indicate on the check that this is a donation in honor of Veronika. There is also a form to donate online with a credit or debit card at www.ftlnavyleague.org/veronika

Condolences may also be shared at www.fredhunters.com.
Published by Sun-Sentinel from Jul. 30 to Jul. 31, 2021.
To plant trees in memory, please visit the Sympathy Store.
MEMORIAL EVENTS
To offer your sympathy during this difficult time, you can now have memorial trees planted in a National Forest in memory of your loved one.
MAKE A DONATION
MEMORIES & CONDOLENCES
2 Entries
Valerie and family, I´m so sorry for your loss. Veronika was much loved and adored by many. She was so emotionally strong after George and your sister. I will miss her very much.
Betty Schultze
Friend
August 8, 2021
My deepest sympathy. Veronica was a gracious and talented lady. I knew her from both the Opera Society and Symphony society. She will be missed . Effie Peters George
Effie Peters George
Friend
July 30, 2021
Showing 1 - 2 of 2 results