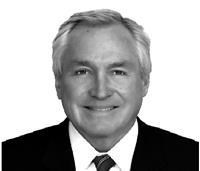 BORN
1943
DIED
2016
FUNERAL HOME
McCoy Funeral Home Inc
401 E 3rd St
Sweetwater, TX
Lifetime Sweetwater resident and prominent business and civic leader Ronnie Lyman Cox died unexpectedly Tuesday, July 19.
A memorial service will be held at the First United Methodist Church, Sweetwater Friday, July 22, at 11 a.m.
Visitation will be at the McCoy Funeral Home, Sweetwater, on Thursday, July 21, 2016 from 6-7 p.m.
Cox, born March 13, 1943, took over Operation of Cox Jewelers in 1965 after receiving a B.A degree in economics from Rice University, Houston, Tx. He won the highest honor given by the American Gem Society, the Robert M. Shipley Award, in 2011. Ronnie won the award based on his expertise and commitment to his community, personal business, the jewelry industry and his participation in local civic groups, service organizations and industry charity boards. He sat on the Board of Directors of the First Financial Bank of Sweetwater, the First Financial Trust & Asset Management Company, Abilene, Tx, the First National Bank of Sweetwater, and the Nolan County Foundation Board. Since 1965, when he took over the business from his father, Cox was at the helm of Cox Jewelers through its 11th anniversary in 2011. After retirement in 2012, he took ownership and management of the Perry Ranch at Gannon, TX.
He is survived by his wife Sally, daughter Lisa Cox Sanders and her husband Todd Sanders of Abilene, son Jason Cox of Sweetwater, and two grandsons Brandon and Chase Sanders of Abilene, nephew J.R. Cox IV and nieces Lesley Belk and Elise Greiger all of Austin, TX.
Cox's grandfather, John R, Cox, Sr. came to Texas from Tennessee 1886. After a stop in Paris, Tx., he settled in Sweetwater in 1889 and founded Cox Jewelers in 1895. His son John R. Cox, Jr, father of Ronnie Lyman Cox, was born in 1904 and ran the business from 1925 to 1965. The business has been on the Sweetwater square since its beginning, although it has been moved several times. The first location opened September 15, 1995 on the north side of the square with a few show cases in a furniture store. It was soon moved to the west side of the square and shared a building with Starr Drug Store. From there, Cox Jewelers moved to a space in the Levy in the Levy Building. The final location on the south side of the square was purchased by John Jr. 1935.
Among his achievements was Outstanding Young Man 1977, Past President of the Chamber of Commerce, Past President of the boards of the Rolling Plains Memorial Hospital Board, Sweetwater Industrial Foundation, Sweetwater Enterprise for Economic Foundation. He served as member of the international Board of the American Gem Society, and a member of the Board American Gem Society Laboratory, Las Vegas, Nev.
Ronnie was preceded in death by his parents, Hazel Cox in 1995 and John R. Cox, Jr in 1993; and a brother John R. Cox III in 2013.
In lieu of flowers memorials may be made to the American Heart Association or The American Cancer Society.
Online condolences may be expressed at www.mccoyfh.com.
Published by Sweetwater Reporter from Jul. 21 to Jul. 22, 2016.
To plant trees in memory, please visit the Sympathy Store.
MEMORIAL EVENTS
Jul
22
Memorial service
11:00a.m.
First United Methodist Church
Sweetwater, TX
Funeral services provided by:
McCoy Funeral Home Inc
MAKE A DONATION
Please consider a donation as requested by the family.
MEMORIES & CONDOLENCES
Sponsored by McCoy Funeral Home Inc.
16 Entries
I talk about Ronnie all the time. He was someone that I idolized as a wonderful person and
at AGS. He was a mentor, friend and made amazing contributions to AGS over many years. He is truly missed by so many of us.
Kelly Newton
Friend
July 17, 2020
Think of Ronnie often and really miss his deliberate reasoning and sound advice. What a great friend and standard bearer for his profession.
Bill Sites
Friend
July 15, 2019
Sally, Marilyn and I are heartsick over Ronnie's death. He was always the perfect gentleman and such a great role model for me and so many other AGS members. He was so much more than a jeweler, he was the epitome of what a professional and a gentleman should be and, he was a great friend. I always looked forward to visiting with him and enjoyed our flights together after board meetings. He will surely be missed by many. God Bless you and your family.
Kelly Newton
September 6, 2016
Sally:
I am so sorry about your loss of Ronnie. He was such a nice man.
You might not remember me but I remember you both. I rented a townhouse to you some years ago and you two were the best tenants I ever had. It was a pleasure renting to you and knowing you both'
Richard Ebener
August 25, 2016
Sally, I have been back in San Angelo over 7 years. I occasionally read the Ruidoso News and so shocked to read of Ronnie's passing! The two of you were favorites of mine. He once brought me a Rolex box for my watch. I am truly saddened at this news and pray for your peace in the days and years to come. Lavonia Kerby
August 12, 2016
Sally,We are extremely sorry for the loss of Ronnie. In the short time we knew him he became a good friend. We know he will be missed by you, your children and grandchildren. Our prayers are with you all during your time of sorrow.

Sincerely,
Janet and Ronnie Hess
Janet and Ronnie Hess
July 24, 2016
Prayers and condolences to Ronnie's family. He was always so nice to me , and bought lots of watermelons from me at Farmer's Market. Always a true gentleman and owner of Cox Jewelers
Linda Stuart
July 23, 2016
So sorry to learn of Ronnie's passing. He was a real asset to Sweetwater.
Lavelle Layfield
Lavelle Layfield
July 22, 2016
May your memories of the wonderful times you shared with your loved one comfort you and your family, today and always.
American Heart Association
July 22, 2016
He was such a kind & gracious person , we both loved BBQ recipes & he would come & talk to me about oil & gas in this area.
Robert C. Bredemeyer
July 22, 2016
The jewelry industry has lost a true gentleman and honest businessman. Our association through the American Gem Society spanned many years and countless business and personal conversations developed into our close friendship. Honesty, integrity, level-headedness and a brilliant financial mind voiced in a calm manner are Ronnie's legacy. RIP dear friend.
Bill Sites
July 22, 2016
So sorry to hear of your loss. Ron was one of the nicest guys I ever knew. I went to school with him from seventh grade till graduation at SHS. He was a true gentleman and will be missed.
Jim Henington
July 22, 2016
So sorry to hear of Ronnie's passing. I was an employee years ago at the jewelry store and in his home. He was a delight to be around. May your memories of him comfort you now and in the days ahead.
Bessie Marshall
Mesquite, TX
Bessie Marshall
July 22, 2016
Sally, I'm so sorry for your loss. Having been a classmate of Ronnie's, it was a pleasure to know him. We all appreciated the hosting of the luncheon at our 50th. I'm so glad that I got to be there. You and your family are in my thoughts and prayers.
Barbara Burleson Benson
Barbara Burleson-Benson
July 21, 2016
Dear Sally and family, My heart pours out to you during this difficult time. I am sorry for your loss. Ronnie will definitely be missed! May God give you HIS strength during time of grief. God bless, Lori McCoy
Lori McCoy
July 21, 2016
I am so very, very sorry for your loss. Ronnie was one of the greats of Sweetwater. Sending much love and prayers your way. Love ~ Ann
Ann Trammell Qualls
July 21, 2016
Showing 1 - 16 of 16 results