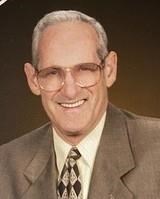 BORN
1936
DIED
2021
FUNERAL HOME
Lewis Funeral Chapel - Fort Smith
4817 Kelley Highway
Fort Smith, AR
Robert Wells
Robert Joseph Wells,84 of Fort Smith, entered his heavenly home Saturday, August 14. Born August 16, 1936 in Stuttgart Arkansas to Arlys Earl (Buck) Wells and Eleanor Selig Wells. Bob delivered newspapers for over 5 years before he graduated from St. Anne's Academy and Arkansas Tech. He served in the National Guard and then as Sgt. in the Army. He spent many years working at Otasco, then Payless Cashways, Lowe's, and Lewis Funeral Chapel. Bob was a dedicated member of Immaculate Conception church where he served as money counter and usher for many years. He was also a member of the Knights of Columbus. He was preceded in death by his mother, father and his wife, Myrna. He is survived by one brother Jim Wells of Derby, KS, one sister Kathy Sprouse (Alan Sweitzer) of Fayetteville, AR, two step-daughters, Linda (Dave) Dickson Whiteis and Terry (Bob) Settle, both of Fort Smith, three grandsons Kevin (Terri) Settle, Jeremy (Genevia) Settle, and Daniel (Elizabeth) Settle, seven great-grandchildren, as well as many cousins, nieces, nephews, and great nieces and great nephews. The family would like to thank Baptist Hospital staff for the wonderful care Bob received in each of his stays there and to Methodist Village Care Center, Brookdale Senior living, Chapel Ridge Health and Rehab, and Peachtree Senior Living for the care and friendship provided over the past several years. Bob will always be remembered for his love of baseball, specifically the Cardinals, his infectious smile, and his passionate desire to help everyone. In lieu of flowers, please donate to IC church in his name or the church or charity of your choice. Rosary will be at 9:30 a.m. and Mass at 10:00 a.m. on Monday, August 23, 2021 at Immaculate Conception Church in Fort Smith, AR with interment at 11:00 a.m. at The U.S. National Cemetery in Fort Smith, AR. Arrangements are under the direction of Lewis Funeral Chapel in Fort Smith, AR.
Published by Times Record from Aug. 20 to Aug. 22, 2021.
To plant trees in memory, please visit the Sympathy Store.
MEMORIAL EVENTS
Aug
23
Rosary
9:30a.m.
Immaculate Conception Catholic Church
Fort Smith, AR
Aug
23
Funeral Mass
10:00a.m.
Immaculate Conception Catholic Church
Fort Smith, AR
Funeral services provided by:
Lewis Funeral Chapel - Fort Smith
MAKE A DONATION
Please consider a donation as requested by the family.
MEMORIES & CONDOLENCES
Sponsored by Lewis Funeral Chapel - Fort Smith.
2 Entries
I was so sorry to see where Bob had passed away. I wasn't there for the funeral... He and Myrna were lifelong friends.... RIP Bob....
BIL ENGLES
Friend
August 30, 2021
Bob and Myra were very special people. I never saw either of them without a smile and a big hug. My deepest sympathy to the family.
Becky Ruth
August 21, 2021
Showing 1 - 2 of 2 results